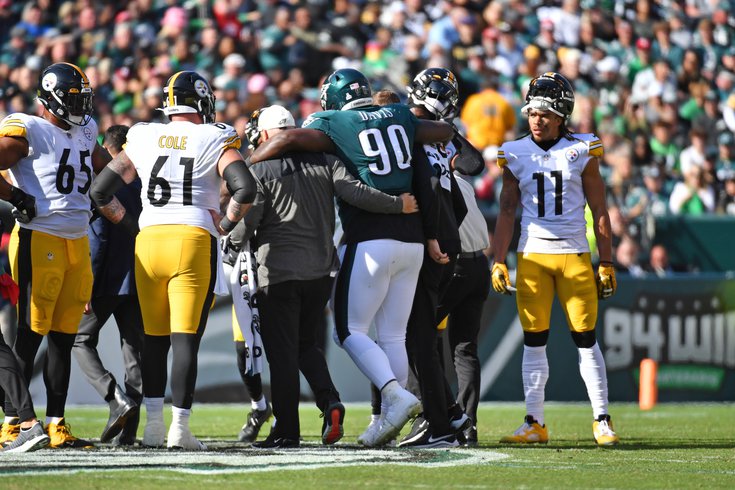 The biggest (literally and figuratively) help the Eagles can get ahead of the team's Week 13 matchup with the Titans on Sunday is rookie defensive tackle Jordan Davis getting back on the field. Davis was placed on IR after suffering an ankle injury in the team's Week 8 win over the Steelers and has missed the last four games. It's been a rough go of things for the Eagles' run defense in Davis' absence, but there is some hope that he can play against Tennessee and superstar running back Derrick Henry.

"He's had a good week so far," head coach Nick Sirianni said about Davis, whose 21-day practice was opened this week, preparing him for his comeback this season. "Obviously [we] don't have to make a decision yet. I don't tell you guys about that stuff yet. But he's looking good. He's looking good and we're hopeful."

Davis' immediate impact at the pro level has never been more evident than it has the last several weeks with him sidelined. The Eagles have been unable to consistently stop the run with their first-round pick missing time. Here's how that unit has fared statistically in the four games Davis has missed:

Not ideal. Pierce and Robinson really crushed them. They did a commendable enough job containing Taylor, but it was pretty strange how the Colts abandoned the run that afternoon in Indianapolis. Henry, the best running back of his generation and a guy I assume will be in Canton one day, is entirely different type of test compared to these dudes though.

Even if Davis plays against the Titans in a limited role as a part of new, larger defensive tackle rotation that includes newcomers Linval Joseph and Ndamukong Suh, plus starters Fletcher Cox and Javon Hargrave, it might be enough for the Birds to slow down Henry from his typical torrid pace.