Eagles-Jaguars: An early look at the odds in Doug Pederson's return to Philly

The Eagles are 6.5-point favorites over Doug Pederson's Jaguars across a handful of sportsbooks 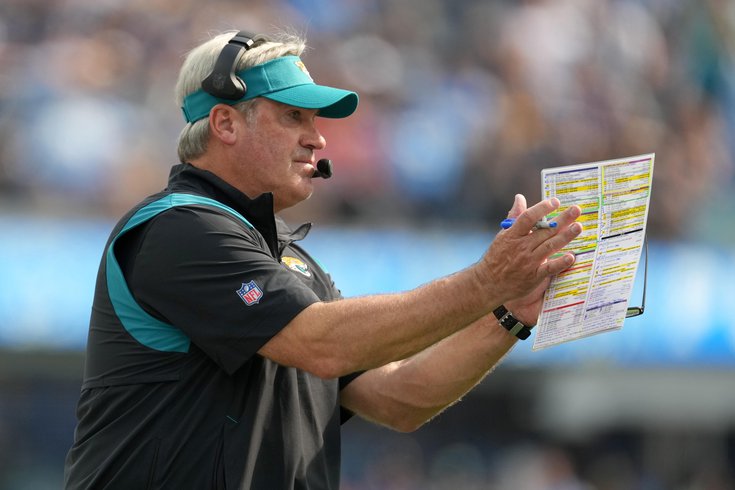 Doug Pederson makes his return to the Linc on Sunday.

After the Eagles completely dismantled Carson Wentz and the Commanders, the reunion with former coach Doug Pederson and the Jacksonville Jaguars is on deck.

Who had that one looking like the Eagles' toughest matchup on their bingo card?

The Eagles are coming off back-to-back routs of Minnesota and Washington, which have propelled them to their first 3-0 start in six years, with a punishing defense, a dominant receiving corps, and Jalen Hurts looking like an MVP.

The Jaguars, meanwhile, have also handed out consecutive pummelings of their own, blanking the Colts 24-0 in Week 2 then pummeling the Chargers 38-10 out in LA on Sunday. After a loss to Wentz's Commanders to open the season, Jacksonville has quickly morphed into one of the NFL's biggest surprises, with Doug Pederson already matching Urban Meyer's win total from that disastrous last season just three weeks into 2022.

Which team will keep the good times rolling when they meet at the Linc on Sunday, let's take a look at the odds:

As you can see, the Eagles are 6.5-point favorites across a handful of sportsbooks as of Monday, similar to the spread they held over Washington for most of last week.

Maybe the line closes in more as the week goes on, but for now, the books like the Birds. Heck, everyone seems to be loving the Birds right now.

No doubt will the Lincoln Financial Field crowd be electric once again on Sunday, as the Eagles look to take one against their old, Super Bowl winning coach and improve to 4-0.