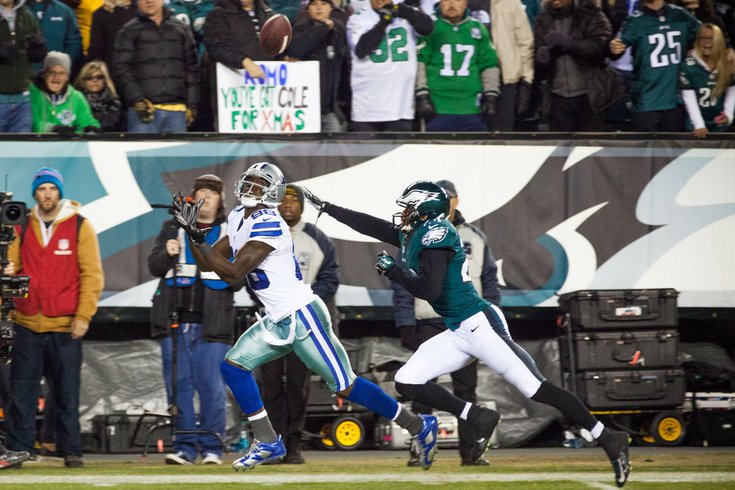 Bradley Fletcher is not as fast as Dez Bryant.

Continuing on once again with our offseason team needs series, (cue Darth Vader music) we move onto the disaster areas of the Eagles roster.  We identified CB as the most glaring need on the team when we began this series. Here's what we said:

"What a mess. Cary Williams and Bradley "Under the Rainbow" Fletcher formed one of the worst starting CB tandems in the NFL, and both could be gone this offseason. Fletcher is a free agent, and is unlikely to be re-signed after the defensive staff gave him every opportunity to break out of what defensive coordinator Billy Davis classified as a "slump." Williams is among the highest paid players on the team, and is scheduled to count for $8,166,668 against the cap next season. If the Eagles cut him, they'll save $6,500,000 of that. (Graphic via overthecap.com)

In the slot, Brandon Boykin didn't play up to the level he played at in 2013, but is still a good player who has to be frustrated with his low number of snaps playing behind two less talented corners. The Eagles will struggle to retain him when his contract expires after 2015, as there may be other teams around the league that are less concerned with Boykin's height and may view him as a starter. Meanwhile, Nolan Carroll was OK in a sub-package role, but the defensive staff didn't think he was better than Fletcher, which is concerning.

And then there's Jaylen Watkins, who we didn't get to see much of in meaningful games in 2014. To be determined if he'll settle in as a corner on the outside, in the slot, or at safety."

Here are some players who might make sense for the Eagles both in free agency and in the draft:

Maxwell is the type of CB Seattle's "Legion of Boom" has become known for. He's big, attacks in the run game, and gets physical with opposing wide receivers. However, one question that has emerged with Maxwell by many Eagles fans is whether or not he had a huge advantage playing with three Pro Bowl players in the Seahawks' secondary (Richard Sherman, Earl Thomas, and Kam Chancellor)? We covered that in detail here.

The NFL began tracking forced fumbles as an individual stat in 1991. Since then, Charles Tillman has an absurd 41 forced fumbles, which is seventh in NFL history. And he's a freaking corner! The top 12 players in career forced fumbles are to the right. It's basically Tillman, the best pass rushers of the last few decades... and Brian Dawkins.

Tillman has only played 10 games the last two seasons, and his game is in decline. He may retire. However, his style of play is an absolutely perfect fit for what the Eagles value. He's big, he's physical (obviously), and he makes plays. The Eagles often don't expect their rookies to play immediately, and if he can still play, Tillman could potentially buy them a year for a rookie to get up to speed.

At a minimum, if Tillman still wants to play, maybe you give him a chance to come in and compete for a roster spot / starting job like the Eagles did with Kenny Phillips a couple years ago.

Waynes is tall and skinny, and he'll need to spend some time in the weight room when he gets to the NFL. Despite his thin build, Waynes excels at press coverage, but could use added bulk to hold up in the run game. This is a long, lanky cover corner that would fit in well with the Eagles on the outside.

Williams has great size and length, and he's a willing tackler in the run game. However, there's a thinking that he doesn't run particularly well. The NFL Combine will be huge for Williams.

Rollins met with Chip Kelly and Billy Davis at the Senior Bowl. We covered him in greater detail here.

Rowe started at CB for Utah this season after playing his first three seasons at safety. If the Eagles see Rowe as a CB at the next level, he has the long frame at 6’1, 201 and physical nature against the run that they have prioritized. If they view him as a safety in the NFL, he has versatility to cover receivers, which enables them to stay in their base defense against three WR sets.

In 2013 against Florida State, Gunter was locked up against 6'5 WR Kelvin Benjamin for most of the game, and Benjamin only managed two catches for 46 yards, one of which was a 35 yard reception in which Miami was in Cover 2, and he was not in Gunter's zone. The Eagles love big corners, and Gunter is 6'2 with good speed and a willingness to hit.

(We covered Rowe and Gunter earlier in the week in our Senior Bowl defensive preview).