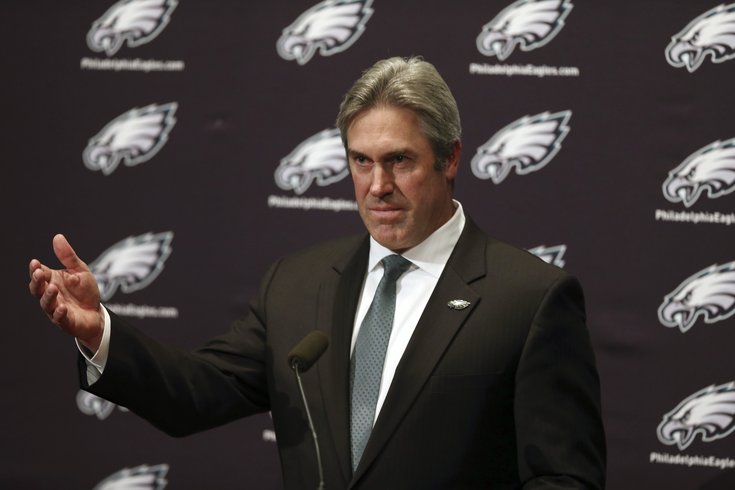 Ahhhh, power rankings... Whenever there's offseason roster movement such as free agency or the NFL Draft, you can always count on some power rankings to pop up shortly thereafter. With the 2016 NFL Draft in the rearview mirror, sure enough, there are power rankings! Gotta get them page views, son.

Anyway, here's a roundup of what the national folks think of your Eagles (We omitted FOXSports because theirs is an annoying slideshow, speaking of page views):

Sam Bradford apparently still wants to be traded. Whoopty-doo. This is how that situation will play out: The Eagles will hold on to him, unless they are completely blown away by a trade offer, which is going to come from ... where, exactly? Which team needs Bradford that badly? Per Jay Glazer, a former colleague at Fox, Philly likes the idea of a "pissed-off" Bradford. Meanwhile, Chase Daniel -- who worked with new coach Doug Pederson in Kansas City the last three seasons and, given the opportunity, might prove to be as good as Bradford -- is pulling farther ahead. Everyone I've spoken with is high on No. 2 overall pick Carson Wentz. They think he merely needs time. All the more reason to hold on to Bradford for a year.

Hey! Sam Bradford is back! Which is great, because without him they may have run out of quarterbacks. Just kidding, of course. The question now is how many members of the Philadelphia Quarterback Club hit the field this year. If it's more than two, the smart money says this ranking drops.

Welcome to Philadelphia, where the QB succession plan for Carson Wentz has already riled up Sam Bradford. Eagles fans better settle in for Year 1 of the Doug Pederson era.

When do they play Carson Wentz? When should they? My answer? Right away. Get on with it.

Soooooo... Overall, the Eagles aren't getting much hype. Personally, I don't think this is a good roster. The Eagles are not going to seriously contend for a Super Bowl in 2016. However, the Eagles have a lot of talent on defense. The notion that they're the third-worst team in the NFL, as USA Today says, is ridiculous.

Here's how the Eagles measure up to the rest of the NFC East in these rankings:

• I'm not exactly sure why anyone would think the Cowboys are among the 12 best teams in the NFL. They were an atrocious 4-12 team last season, and it's not exactly as if papier mâché Tony Romo played well when he was healthy.

• The Giants had the third-worst defense in NFL history a season ago and won six games each of the last two years. I get that they overpaid signed a bunch of guys in free agency, but are we really calling this a slightly above average team?