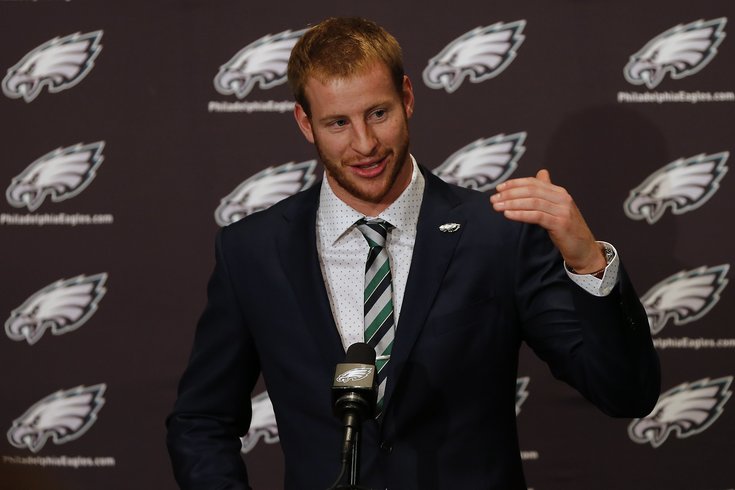 If the Eagles do not deal Sam Bradford before the start of the season, Carson Wentz will probably be the No. 3 quarterback in 2016.

With the 2016 NFL Draft in the books, there are eight new Philadelphia Eagles.

Let's take a preliminary look at the Eagles' depth chart after the draft, rookies in bold.

One enormous "elephant-in-the-room" issue from now until the games begin will be the status of Sam Bradford, who demanded a trade out of Philadelphia when presented with competition.

The Eagles have reiterated that they want Bradford to be their starting quarterback, but at this point, it will be a challenge bringing him back into their locker room. Still, for now, we'll project him as the starter until he's no longer on the team.

Carson Wentz is likely to sit for a year, but ideally, he'll be primed and ready to go by 2017.

The Eagles added Smallwood to their running-back rotation in the fifth round for depth. There were rumors that Ryan Mathews could be traded, which Roseman stomped out at the owners meetings, and is clearly unlikely now as he'll likely be the starter.

Ryan Mueller is the one fullback on the roster while Kevin Monangai and Ross Scheuerman are the other two backs on the roster. Trey Burton could also get a look at fullback.

Doug Pederson said that Jordan Matthews will play more on the outside this season. He is easily the best receiver on the team, and it previously made no sense taking him off the field. In free agency, the Birds added Givens and Randle.

Huff is in an interesting spot. He was of course among the Oregon players brought in by Chip Kelly. While he has shown explosive flashes, overall he has been inconsistent. What does the new regime think of him? For now, we'll leave him at WR3, but I put him there with no conviction. The addition of Randle gives Huff legitimate competition.

The other wide receivers on the roster are T.J. Graham, Freddie Martino, Jonathan Krause, Seantavius Jones, and Xavier Rush.

The Eagles were expected to add a receiver in the draft, but that did not happen.

Ertz's numbers spiked at the end of the season for the second year in a row. He's the better receiving threat while Celek is the better blocker. Trey Burton could play a versatile role as a reserve tight end as well as a fullback.

Four of the Eagles' OL starters are obvious. For now, we'll slot Barbre's name in with dry erase marker at LG, seeing as they included him on "OL starter row" in the locker room. 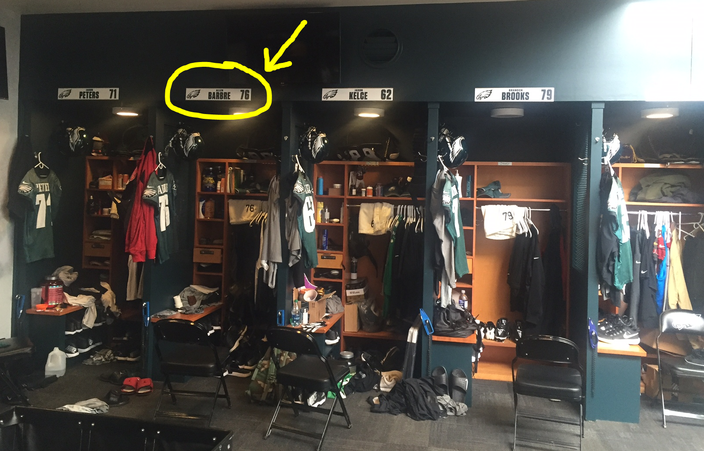 Obviously, the Eagles badly needed depth at OT and a capable starter at LG. The Eagles used their third-round pick on Seumalo, a rare player who can play all five along the offensive line. His primary position at Oregon State was at center, where he can provide depth for Jason Kelce, while also competing against Allen Barbre and Stefen Wisniewski for the starting LG spot.

Halapoulivaati Vaitai was one of the Eagles' fifth-round selections. He'll be a developmental tackle prospect, who could potentially take over at RT whenever Lane Johnson moves over to LT in relief of an aging Jason Peters.

Most have Vinny Curry slated as a starter, but the value that he brings is as an inside-outside pass rusher. He'll get plenty of snaps in a 4-3, unlike the last three seasons, but I believe he'll be used as a piece the Eagles move around along the line. Perhaps it's best to think of him as a defensive line pass rush specialist, as opposed to specifically pinning him down as a defensive end. Therefore, we'll pencil in Barwin and Graham at the starting spots.

In the draft, the Eagles added DE Alex McCalister, who will strictly be a pass rush specialist until he puts on more weight. The Eagles did not add a defensive tackle.

Linebacker was a dire need for the Eagles heading into the draft, as they desperately need depth. After the starters, they have Najee Goode and not much else.

The Eagles added Oregon linebacker Joe Walker, who will compete for a roster spot, but they still lack adequate depth.

The only thing I'm fairly sure of here is that Rowe will be one starter. The rest of the above is a hodgepodge of corners who will all be competing for jobs and playing time in training camp. The Eagles added two defensive backs in the draft, and we'll project Blake Countess to play corner.

Jenkins and McLeod are the obvious starters here. Maragos is a special teamer, Couplin formerly played for Schwartz in Detroit, and Reynolds is thought to be a "Howie guy." Mills was outstanding value in the seventh round as a guy who can play both safety and corner.

There will actually be a kicker competition to watch in camp this year, as Cody Parkey will battle it out with Caleb Sturgis.