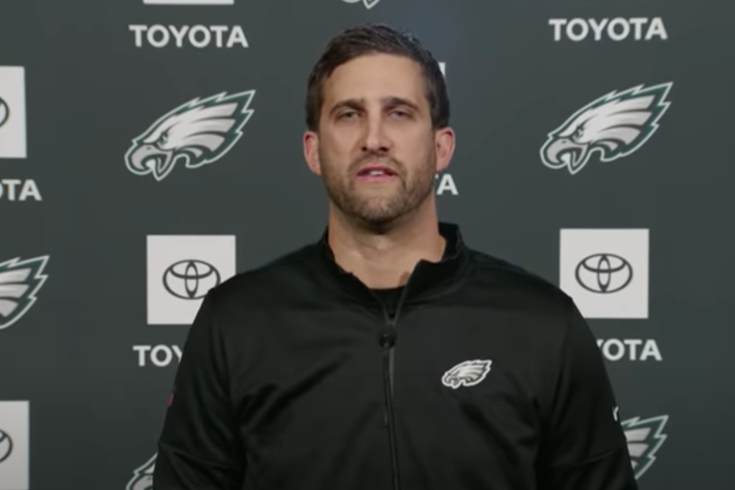 Every coach, scout and front office executive has a different process of evaluating talent and player personnel when it comes to the NFL Draft.

Nick Sirianni, the Eagles' new head coach, does not appear to be an exception to that rule as he prepares for his first draft in Philly next Thursday.

During the team's pre-draft press conference Wednesday, Eagles' general manager Howie Roseman mentioned that Sirianni and his coaches used games to evaluate a prospect's level of competitiveness on their virtual interviews.

"It was kind of fun to see that," Roseman said.

Sirianni then went into greater detail about what he and his staff have been doing on these Zoom calls, and it caught many by surprise to hear the specific tactics he was utilizing.

"We didn't go earth-shattering on these games, right," Sirianni said. "I played a couple of them at rock-paper-scissors. It was as easy as that. Rock, paper, scissors, let's see how competitive you are. I'm competitive. I'm going to be talking trash to them. Did you talk trash back to me?"

That's not a misprint. The energetic and enthusiastic Sirianni played rock-paper-scissors with and talked trash to potential draft picks in order to evaluate their competitiveness.

Sirianni also said that his staff used "Jeopardy!" questions as well to find out how competitive these prospects were.

"There's different ways to do it, it looks a lot of different ways, but our coaches got so creative with this," Sirianni said. "They all did a great job of just figuring out how to compete, because everyone's compete looks a little different. I get up there, I play them rock-paper-scissors. They got a little more creative than I did at times."

"Anything you compete at, when you compete with somebody that's competitive, they're going to go at you no matter what game you're playing."

Below is video of Sirianni's full comments, which includes some chuckles from Roseman himself.

This has to be a first. @MySportsUpdate pic.twitter.com/qnYI03M2CG

Given that it's Philly, social media exploded after hearing Sirianni's remarks about playing rock-paper-scissors with draft prospects. Below is a sampling of how fans were reacting to Sirianni's comments.

The fans of the rest of the league when they see Nick Sirianni happy talking about playing rock, paper, scissors with draft prospects. pic.twitter.com/kA6RxiXh3p

What I got from that press conference was that Nick Sirianni is a mix between Michael Scott and Ted Lasso😂😂
The guy played rock, paper, scissors to determine the competitiveness of College players 😂#FlyEaglesFly #Eagles #EaglesDraft

Further confirms why they will finish 4th in the NFC East.

The @Eagles gonna rock paper scissors their way to 3-14 https://t.co/BLtouYQ3Ln

Is this dude for real?? #Eagles #FlyEaglesFly pic.twitter.com/yAk6e6Cg0T

The @Eagles are gonna propose a rule change switching coin-flips to rock-paper-scissors https://t.co/ibRAYkFxNV

Rock-paper-scissors? Looks like I just made it to the top of the Eagles draft board https://t.co/z2PgyCyFOw

Sirianni has yet to coach a game in Philly, but he's already been turned into a bit of a punching bag by many. Whether it was his introductory press conference where he appeared to be extremely nervous, his lack of play-calling experience or the belief that he is just a puppet coach for Roseman and team owner Jeffrey Lurie, Sirianni's first three months on the job have not been boring.

Wednesday's remark about playing rock-paper-scissors with draft prospects only adds to the intrigue surrounding him.

Whether Sirianni is being treated fairly is up for debate. But what isn't is his desire to compete, which he has reiterated over and over again since becoming the Eagles' head coach. Based on that, it's not a surprise that Sirianni is willing to think outside the box a bit when it comes to evaluating talent. And for that, he should be given some respect for his creativity.

But all that really matters is how Sirianni does coaching on the field. If his rock-paper-scissors methodology and commitment to competition translate to strong draft picks and Eagles' wins, fans will be happy. However, if the Eagles fail to draft well next week and continue to lose games, comments like Wednesday's about playing rock-paper-scissors will be made fun of for years to come.