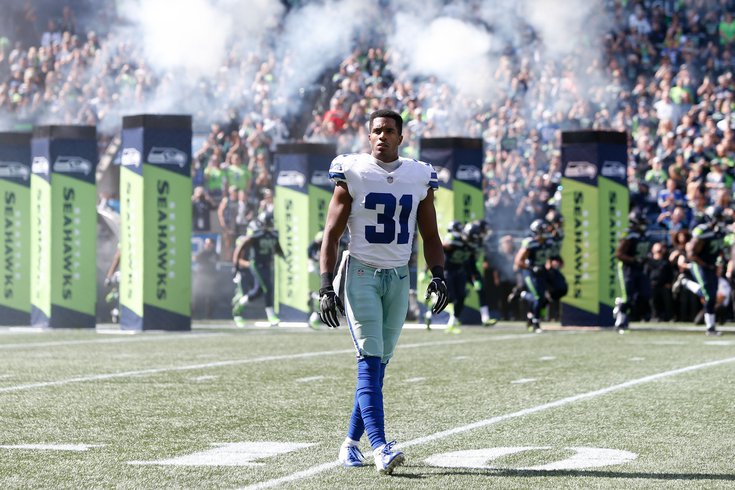 The new NFL league year doesn't begin for another two weeks. That's when teams can start negotiating with free agents around the league, but that hasn't stopped a flood of rumors about just how the Eagles will attack free agency and the draft. And as that all-important March 18 date creeps closer and closer, don't expect for them to stop any time soon.

As we do from time to time, let's take a look around at what various members of the local and national media have to say about the Eagles' offseason plans and much more in a brand new edition of What They're Saying...

The Byron-Jones-to-the-Eagles rumors have been picking up steam recently, especially this week after Adam Caplan said on his Inside the Birds podcast with Geoff Mosher that Philly will be "all-in" on the Cowboys cornerback once free agency opens. Caplan added that a deal for Jones could be in the range of $17 million per season.

On Wednesday, Ralph Vacchiano, a Jets reporter for SNY.tv, posted a story discussing the team's options at cornerback this offseason, and when he got to Byron Jones, Vacchiano had the following to say about Jones' potential landing spot and what he might earn on the open market, and it seems to match up with what Caplan previously reported:

And the money will be big. In fact, both Jones and Bradberry are apparently looking for contracts worth at least $15 million per season - or more on average than what the Jets gave Johnson. Even if the Jets are willing to go that high, they are not the favorites to land either player. For the most part, sources expect Jones will land in Philadelphia while Bradberry ends up in Washington.  [sny.tv]

Speaking of cornerback upgrades, which is something the Eagles seem intent on addressing this offseason given their need, there was a trade earlier in the week that will have trickle-down effects on the Birds. The Jaguars traded CB A.J. Bouye to the Broncos, giving Denver the veteran corner they coveted and presumably taking them out of the running for Jones. It also likely means that Chris Harris Jr., who was linked to Philly ahead of last year's deadline, will hit the open market, which will not only provide the Eagles with a backup plan should Jones sign elsewhere, but could also potentially provide another option for teams also courting Jones, taking them out of the running.

The Broncos being the team to land Bouye is notable to the Eagles for two reasons.

The first is that Denver was (correctly) rumored to be in the market for a veteran corner. ESPN specifically noted the Broncos were among the “strong possibilities” to land Byron Jones. It appears the Broncos are now out of the market for the former Dallas Cowboys defender, thus giving even more credence to the rumors the Eagles could sign Jones.

The second angle to consider is that the Bouye acquisition seals the fate of impending free agent Chris Harris Jr. CHJ was already expected to leave Denver this offseason and this trade only confirms as much. The Eagles were originally linked to Harris Jr. prior to last season’s NFL trade deadline before it happened again back in January.  [bleedinggreennation.com]

Over at ESPN, Tim McManus provided five-step plan for Eagles to return to Super Bowl contention in 2020. Unsurprisingly, it starts with the team addressing their biggest needs in free agent and the draft. More surprisingly, it also includes the Eagles bringing Jason Peters back for another year and signing a new backup quarterback for Carson Wentz.

This would certainly be an interesting move...

Sign quarterback Case Keenum: The Eagles know the value of backup quarterbacks better than anybody, as a very good one in Nick Foles saved their championship season a couple years back. Currently, there is only one QB on the roster beyond Wentz -- Kyle Lauletta -- so there's work to be done. Josh McCown was a valuable resource for Wentz last season and the Eagles would love to keep him around the team. But McCown, 40, fully tore his hamstring in the playoff loss to the Seattle Seahawks in January and is in the midst of a six-month recovery. He hasn't committed to playing ball in 2020, yet. There are some decent free-agent options out there: the Eagles could take a look at Marcus Mariota, or explore bringing Nate Sudfeld back. But the best fit might be the 32-year-old Keenum, who was at the helm during the Vikings' playoff run in 2017 and has started 38 games over the past three seasons. Philadelphia needs a solid option if Wentz goes down. Keenum could keep things afloat over the short term.  [espn.com]

A match made in heaven?

Interestingly enough, McManus isn't the only one who thinks Breshad Perriman would make sense for the Eagles. Over at PFF, Ben Linsey put together a list of one free agent each team must sign this offseason. And he thinks the Bucs wideout would be a perfect match for Philly...

By the end of the season, the Eagles were running out wide receivers anyone recognized. Injuries did a number to the group, and one such injury to DeSean Jackson made it apparent that the Eagles were missing a downfield threat. No player had a higher average depth of target in 2019 than Perriman’s mark of 18.8 yards downfield, and he dropped just one of his 65 targets. By the end of the season, he was a legitimate No. 1 option in the Tampa Bay offense due to injuries. He seems to have put his career struggles behind him, and that should be enough to interest the Eagles.  [pff.com]

Two runnings backs are better than one

In addition to wide receiver and cornerback (and linebacker and defensive line and maybe a backup quarterback), the Eagles will also likely be adding a backup running back this offseason, whether that means they re-sign Jordan Howard or look elsewhere. Sure, Miles Sanders had a breakout second half of the season and carried the load when Howard went down with that mysterious shoulder injury.

According to ESPN's Matthew Berry, who is always looking at the fantasy football angle, the Eagles may not be ready to unleash Sanders as a full-fledged RB1, whether that's because they don't want to overwork him or otherwise, it seems to follow the Eagles model under Doug Pederson and running backs coach Duce Staley. And Berry seems to think the Eagles are still high on Howard.

Berry also noted that Dallas Goedert will continue to be a big part of the Eagles offense, which shouldn't come as a surprise to anyone...

17. I would not count on Miles Sanders becoming a stand-alone fantasy star this year. Philly still wants a RBBC this season and one of its coaches noted the Eagles really missed Jordan Howard down the stretch last season.

17a. Also, if I were in a dynasty league (and I'm in three), and I didn't have to write this column (I do, thus alerting all my league mates), I'd do whatever I could to get Dallas Goedert. Man, do they love him in Philly. The sky is the limit for him there, and I expect them to continue to find even more ways to get him involved in 2020. If Zach Ertz is 1, Goedert is 1a in their minds.  [espn.com]

Finally, we get to what may be the most interesting story of the day. Most of us have heard the story about Lane Johnson digging graves while in high school, but Mike Kaye of NJ.com spoke to Johnson and his former boss at the cemetery about what the Eagles right tackle learned from that job — like what "R" means — and how it's helped him throughout his football career.

Before the Eagles’ right tackle was making millions in the NFL, he was a high school sophomore looking for a summer job. The search for work led him to Groveton Funeral Home in Groveton, Texas, where he picked up a shovel and started digging graves for minimum wage.

“It was tough as sh**,” Johnson told NJ Advance Media. “You’d do a lot of work with a tractor. Once you got to a certain part, the ground would be so hard that you’d have to get an anvil and chip the ground.”

Johnson established his work ethic in that graveyard. He had to be patient and precise, just like when he’s blocking 270-pound pass-rushers on Sundays. And similar to protecting quarterback Carson Wentz week in and week out, each assignment offered different challenges.  [nj.com]