Would the Eagles really consider trading Andre Dillard just to get rid of Alshon Jeffery? 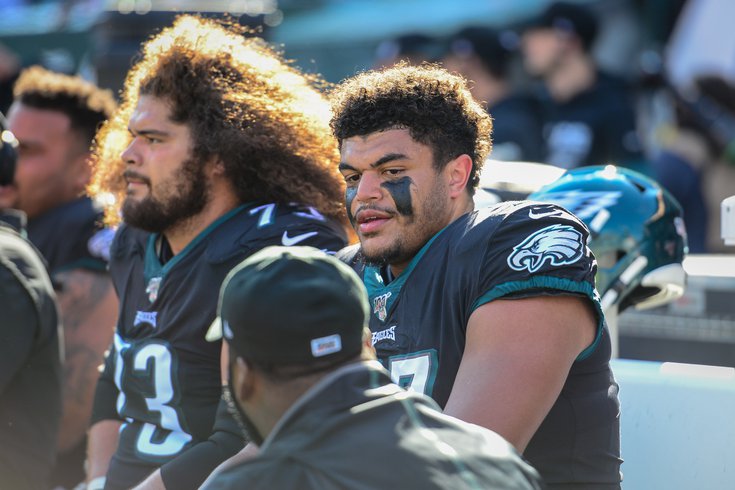 Andre Dillard gets some coaching during as the Philadelphia take on the Chicago Bears.

The Philadelphia Eagles have enough big decisions to make this offseason when it comes to deciding which of their pending free agents they want to bring back. They'll also need to prepare for the draft and decide whether or not they want to pay Malcolm Jenkins, who has said he'd hold out if he didn't get a new deal this offseason.

And then they have to make other decisions, like whether to bring back Jason Peters for one more year or allow former first-round pick Andre Dillard take over as the protecter of Carson Wentz' blindside. Or, perhaps more importantly because of its salary cap implications, the team must make a decision on Alshon Jeffery's future on the team.

The drama surrounding Jeffery, who currently has no timetable to return to the field after suffering a Lisfranc fracture in his foot last season, has been well-documented. The veteran wideout has struggled both on the field — injuries and dropped passes have plagued his last two seasons — and off the field — he's been accused of being the anti-Carson Wentz source inside the Eagles locker room that has leaked information to an ESPN reporter two years in a row. The problem for the Eagles is that because they guaranteed Jeffery's contract in exchange for a small pay decrease in 2019, Philly is going to have a tough time moving him — and an even tougher time doing so without still taking a massive cap hit.

And then there's the Dillard/Peters situation. The simple fact that the Eagles are considering bringing back Peters, who has no doubt had a Hall-of-Fame career, is troubling because it speaks volumes about what the team thinks of his young protege, Dillard. Peters is not returning to be a backup, and if the team is considering one more year of JP, that likely means they don't think Dillard, a guy who they traded up to draft, is ready to start in Year 2. That's extremely uncommon for offensive lineman taken as highly as Dillard.

On Tuesday, ESPN Eagles reporter Tim McManus was on the Mike Missanelli show on 97.5 The Fanatic and spoke on the Eagles left tackle situation just over two weeks before the new league year is set to begin.

"My first thought is the fact that it's even being mentioned about Jason Peters coming back shows you at least a little bit of a window into how they're thinking about Andre Dillard," McManus said. "Because Peters isn't somebody you bring back, Mike, if you think Dillard is ready full on, because Peters is not going to sit there and be like, 'OK, I'll watch Dillard start.' No, if Jason Peters comes back, he fully intends on being the starting left tackle. So even if the thought is in their brains, it suggests that maybe they are not 100% solidified in their thoughts that Dillard is ready to step in and be Carson Wentz' blindside. That alone is interesting."

But that was hardly the most interesting thing McManus offered up. Because there's been some trade buzz around Dillard, given the Eagles saying they'd welcome Peters back for another year and the team could presumably get something back in return for the young tackle, McManus threw out an idea he'd heard being rumored down at the NFL Combine last week, one that would theoretically solve both the problems outlined above, albeit in a way that would be an indictment of some of the biggest moves the front office has made in recent years.

"Top on that there's been trade buzz around that," McManus continued. "There have been whispers, I guess, coming out of the combine. The one that reached me is the idea that Dillard would be packaged with Alshon Jeffery in order to help unload that contract. Now that's a whisper, that's a buzz, but it tells you that there's at least these rumors that are circulating. I don't expect anything to happen in that degree, but I think that it is at least interesting that they are starting to come closer to the idea of Peters returning. I think it suggests that, at a minimum, they're not 100% sure or confident that Dillard is ready to step in now and be the guy."

Having Dillard sit behind Peters is one thing — sure, it wouldn't be a great look for the team — but it's certainly better optics than shipping off a guy you essentially spent three draft picks on (a first, a fourth and a sixth) to cover up an even bigger mistake in Jeffery's guaranteed contract. And for what? When we asked our own Eagles writer Jimmy Kempski about what the Birds might get in return for a package like this, he said the following:

While it seems like the best path for the Eagles to rid themselves of Jeffery and his massive guaranteed contract is by finding a trade partner willing to take on that bill. Unfortunately, no matter where the Eagles ship Jeffery, they're not going to get much of anything in return. But packaging a guy like Dillard, who is supposed to be one of the cornerstones of your franchise moving forward given the position he plays and the draft capital spent to acquire him, with Jeffery just to make a deal work seems like two steps back and one step forward. Sure, the Eagles might have to pair another player with Jeffery to get a deal done, but there seems to be better ways to go about it than shipping off the future protector of your franchise quarterback's blindside.

Still, this could be a window into how the Eagles are thinking. And, if nothing else, it's yet another indication that the team is preparing to move on from Jeffery this offseason, even if it's going to cost them.

McManus went on to outline the Jeffery situation and say that he, like Kempski and others, is now in the camp that believes the 30-year-old wideout will be playing elsewhere in 2020. (You can read more about all the Eagles options regarding Jeffery, here.)

"I don't think that he's going to end up being on that roster," McManus said of Jeffery. "Now, there's complications that come with the fact that they guaranteed his contract for this upcoming season, which means that the dead money, the cap situation is tough for them. It becomes increasingly difficult if they don't have a new CBA in place, because all the dead money gets accelerated into this year, so you talk about a $26 million cap hit, which is not something anybody wants to go through, and so they're trying to work ways around that. If the new CBA comes in place, then you can do a post-June 1 designation, which means you can spread that cap money out and then it becomes a lot easier to move on from Jeffery.

"But it feels to me like they are ready to turn the page here. And if you just look on the fact that they are hellbent on retooling the wide receiver position, and can you really have DeSean Jackson and Alshon Jeffery and really retool the position at the same time? There's also the thoughts of the on-field chemistry between Carson Wentz and Alshon Jeffery and there's definitely people around that situation who feel like there are off field chemistry issues as well, that have led to an air of awkwardness in pockets of the locker room. And I think if you put all of those things together, it seems to make sense to want to move on from a guy in Jeffery who has been dealing with injuries and has seen his play decline as a result of that."

It appears Jeffery's time in Philly is coming to an end one way or another. Let's just hope the Eagles find better solution than giving up a guy many expected to be a huge part of their future after one year just because he had a rough rookie season that saw him struggle in limited action.