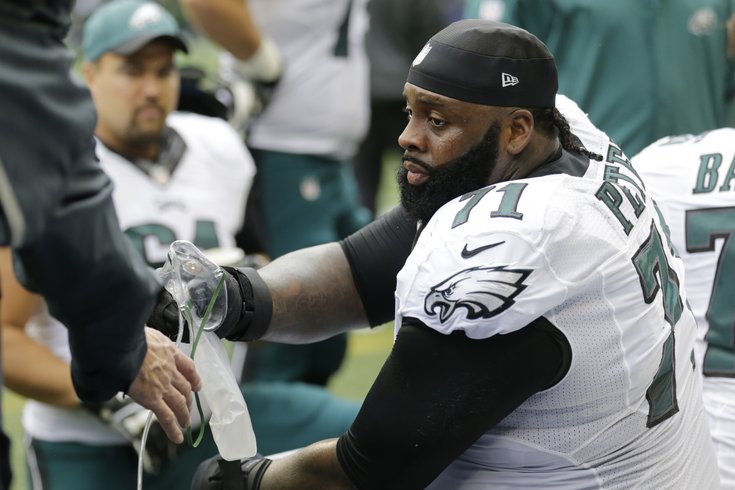 Give that man oxygen, or a masseuse, or supplements, or whatever he needs. I'm kidding about the supplements, Lane, in case you're reading this. To be clear, don't give him supplements.

The 2016 Philadelphia Eagles season is essentially over, so with two games remaining, we'll continue to look ahead to the offseason. As a starting point, let's take a look at each position and figure out which players will be back in 2017. Today we'll look at the offensive tackles.

With so many holes on the roster, if Peters decides to play one more year, the Eagles could put off addressing the offensive tackle position for one more year. Peters and Lane Johnson would give the Eagles a high-quality bookend tandem and would allow Halapoulivaati Vaitai and Dillon Gordon to continue to develop behind the scenes.

MORE ON THE EAGLES: Eagles RT Lane Johnson will start vs. Giants now that his 10-game suspension is over | Ten players the Eagles could draft with their first-round pick | Eagles' Pederson explains decision to go for two after last-second touchdown | Handing out 10 awards from the Eagles-Ravens game | Eagles 2017 opponents

There are some who believe Peters' money could be better used elsewhere. I disagree. At $9,575,000 per year, Peters is the 10th highest-paid OT in the NFL, on a per year basis:

One could make an argument that he's actually a bargain.

Peters has hinted that he will be back next season, and the Eagles would dodge a bullet if he returns.

Johnson is a high-quality player whose absence really affected the Eagles' offense this season. Yes, he's a risk because a third failed test for PEDs will result in a two-year ban. However, he's a talented offensive tackle, and those are hard to replace. Johnson very clearly isn't going anywhere.

Tobin is a decent enough backup left tackle, but he struggles when flipping to the other side, and was a bad starter at guard in the final season under Chip Kelly. Tobin is the kind of a player that you will always try to replace with younger talent. Ideally, for the Eagles, Dillon Gordon will be ready enough a season from now for a backup role instead of an inactive one.

Gordon has stuck on the 53-man roster all season long but was not active on game day until this past Sunday against the Ravens in Baltimore. Gordon never played tackle in his life until this season, when the Eagles converted him from tight end, where he played at LSU. The Eagles will continue to develop Gordon, and as noted above, hope that he can at least fill a backup role in 2017.

In his first professional action, Vaitai received his "Welcome to the NFL" moment when he was manhandled by Ryan Kerrigan and the Washington Redskins defense. He continued to struggle (although not as badly) for a few more games before showing improvement until he sprained his MCL against the Seahawks.

Vaitai remains out, and the Eagles may not need him the rest of the way, but he is a potential starter at RT whenever Johnson takes over for Peters at LT.

And yes, I realize there's probably more green than you'd expect from a 5-9 team. (I agree, for the record).