Eagles RT Lane Johnson will start vs. Giants now that his 10-game suspension is over 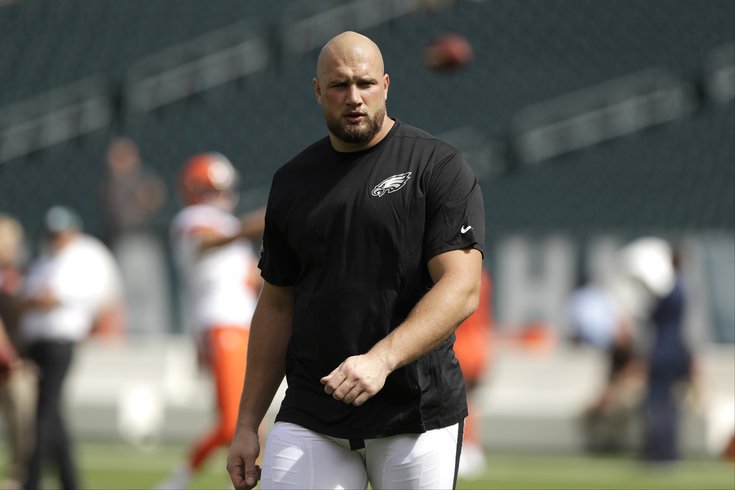 When the Eagles host the New York Giants on Thursday night at Lincoln Financial Field, Carson Wentz will again be playing behind a shuffled offensive line.

If that seems like the norm this season, that's because it has been. In fact, the only two constants throughout the season have been Jason Peters and Jason Kelce. Otherwise, it's been a rotating mix of rookies, veterans and career journeyman protecting the future of the franchise. Here's a look, with each player's number of starts in parentheses.

It's actually been worse than it looks based on that chart. But against the Giants, the re-shuffling of the offensive line could actually benefit Wentz for the first time in a while.

That's because the Eagles will be getting Lane Johnson back from his 10-game PED suspension. And according to head coach Doug Pederson, he's going to be inserted right back into the starting lineup.

"Going into this game, considering the nature of the injuries we’ve had and everything and Lane [Johnson] being back today, Lane will go in as the starter," Pederson said during his day-after press conference on Monday.

Unfortunately, Johnson's return comes at the same time the Eagles could get rookie Halapoulivaati Vaitai, who played well in place of the veteran starter, back from injury. Pederson said Vaitai should be ready to go on Thursday night but is still planning on starting Johnson, which will allow him to ease Big V -- and his rehabbed knee -- back into action.

But what about the guy projected to be the team's future left tackle? Does throwing him right back into a starting role (after 10 weeks off) raise the potential risk of injury?

“You know, it’s possible," Pederson said. "Just have to kind of see when I put my eyes on Lane, where he’s at physically and what he’s been doing over the last 10 weeks. But he’s such a tremendous athlete that I wouldn’t expect anything too traumatic to happen in the next couple of weeks. But obviously, it’s possible.”

Furthermore, there's a chance the Eagles could actually have their starting offensive line back together for the first time since their Week 5 loss to the Lions. In the 10 games since the Birds are just 2-8.

Allen Barbre, who sat out the Ravens game with a hamstring injury, may also return against the Giants, but his status is less certain.

If Barbre is good to go, that means both Stefan Wisniewski and Isaac Seumalo will be out of the starting lineup for the first time in a month. Wisniewski, who was inserted into the starting left guard spot when Barbre moved over to RT to fill in for Vaitai, played well in his six starts.

And as for Seumalo, the versatile rookie who started twice at RG for Brandon Brooks and most recently at RT when Barbre went down, he'll likely be out of the starting lineup anyway this week with Johnson returning, but Pederson's got to be pleased with what he saw out of his third-round rookie when he was pressed into action.

Either way, Wentz will finally be playing behind the offensive line he should've had all season – or at least the closest we've seen to that in quite some time. And that's a good thing, even if there are only two weeks left and the Eagles have already been eliminated from the playoffs.

But given how things have gone for the Eagles O-line this season, would you really be surprised if it was shuffled again before their season finale?