Ten players the Eagles could draft with their first-round pick 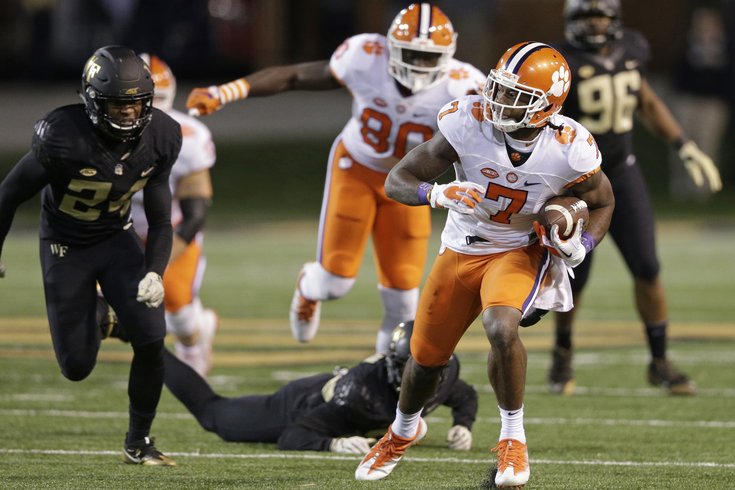 According to FiveThirtyEight.com, the Minnesota Vikings have a two percent chance of making the playoffs this season, which means that their first-round pick, which is owned by the Philadelphia Eagles, is very likely to fall somewhere in the first 20 picks. If the NFL season ended today, that pick would be 15th overall.

And so, with the Eagles' playoff hopes dashed as well, let's take an initial (and very early) look at 10 college prospects who might be on the Eagles' radar with their first-round pick. In alphabetical order:

Barnett is a shorter, thick, strong defensive end who reminds me a little of Brandon Graham. Barnett is equally effective against the run as he is as a pass rusher, and has been an impact player since his freshman year:

In Jim Schwartz's scheme, the defensive line's ability to get to the quarterback while only rushing four sets up everything else for the defense to succeed on the back end. In my view, you can never have enough talented pass rushers, especially when you're that reliant on their production up front.

As we've noted, Connor Barwin will count for $8,350,000 against the cap in 2017, $7,750,000 of which the Eagles can save if they cut or trade him. If indeed they decide to move on from Barwin, the Eagles will need to add to their edge rusher stable (which should probably be a priority anyway, even at times when it's a position of strength).

In 2016, Cook continued to pile up big numbers:

Cook is a complete back, who has speed and some power, as well as the ability to make plays in the passing game out of the backfield. Perhaps his best strength is his combination of vision and lateral quickness to find (and hit) open holes, which is on display in the highlight reel below:

There aren't any obvious flaws in Cook's game. With his ability to be a weapon in the passing game, Cook would be an excellent fit in Doug Pederson's offense.

Of course, there's the debate on how high you should draft a running back, particularly in the 2017 RB class, which has the potential to be among the deepest and most talented ever. And then there's Cook's off-the-field history, which also has to be seriously considered and thoroughly investigated.

In his career at Western Michigan, Davis has put up kinda decent numbers:

As you can see in the above video, Davis has size, speed, and hands. Obviously, I shouldn't have to point out the Eagles' need for receivers.

Jackson's position could just be listed as "playmaker," but his primary position in the NFL will be at corner. At USC in 2015 (his sophomore season), in addition to being a regular starter at CB, Jackson caught 27 passes for 414 yards and 2 TDs, he had two punt return TDs, a pick six, and a blocked field goal.

Jackson has to become a more physical tackler, but he has elite athleticism, and he makes plays. Watch:

Jones has only gotten his due more recently, but he's one of the best corners in this draft. In 2015, Jones had four interceptions, four forced fumbles, two fumble recoveries, 10 pass breakups, and two touchdowns (one on an INT, one on a fumble recovery).

In 2016, his numbers are down a bit because opposing offenses have stayed away from him, but he has three interceptions, two forced fumbles, and six pass breakups.

Note that when the ball is in the air, Jones thinks it's his. He plays with a certain level of confidence that is ideal in an NFL corner. Jones is a ball hawk at the corner spot, producing turnovers by way of interception and forced fumbles, and the Eagles' need for corners is obvious.

King has outstanding ball skills, as he racked up 13 pass breakups and tied for second in the NCAA with 8 INTs in 2015. He also has versatility that the Eagles emphasize, as he looks comfortable playing both on the outside and in the slot, and contributes as Iowa's primary kick and punt returner.

In 2016, again with opposing defenses trying to stay away from him, King has seven pass breakups and two interceptions.

Here's King against Pitt last season, when he bested 2016 second-round pick Tyler Boyd. Note that his two picks come on plays in which King made the play, as opposed to being the beneficiary of some kind of errant pass.

The one thing working against King is his 'heighth,' at 5'10, but that seems to be less of a concern to Jim Schwartz than it was for Chip Kelly.

Washington has blown out almost everyone it has faced this season, outscoring its opponents 578-224. As such, the Huskies have not needed their passing attack in the second half of their games, rushing 500 times this season and only attempting 370 passes. Ross' numbers have been affected by that, and he still caught 76 passes for 1122 yards and 17 TDs.

On the downside, Ross has a significant injury history. He previously tore an ACL in one knee and tore his meniscus in the other. Still, despite his injury setbacks, at the Husky Combine back in March, Ross ran a 4.25 40, according to Washington football's Twitter account:

While that's not the most trustworthy 40 ever run, clearly Ross has blazing speed:

The Eagles don't currently have a receiver who has shown he can consistently take the top off a defense. If they're comfortable with his medicals, Ross could be a target in the first round.

Many believed that Tabor was the best CB in college football heading into the 2015 season. According to Lance Zierlein of NFL.com at the beginning of this season, Tabor had a pass breakup or interception on 19 of the 50 targets he saw in 2015. He is credited with only allowing three touchdowns over the last three seasons.

And it's not as if his play has fallen off. In 2016, according to cfbfilmroom.com, Tabor allowed six receptions on 21 targets this season.

If there's a knock on Tabor, it's his tackling. A highlight reel:

In case you haven't noticed already, there are a lot of corner prospects who would make sense in the first round.

Williams had a strong sophomore season in 2014, catching 57 passes for 1030 yards (18.1 YPC) and 6 TDs. He was poised for a huge season in 2015, when he broke his neck against Wofford in the season opener after being pushed into the goal post on what was a touchdown reception, shown below:

He missed the remainder of the season, and there was a question as to whether he'd ever play again. After healing fully, Williams was ready for the start of the 2016 season, when he went off for 174 yards on 9 catches against Auburn. His production tailed off a bit thereafter, until recently, as he has topped 100 yards in four of his last seven games. So far on the season, he has 84 catches for 1171 yards and 10 TDs.

At 6'3, 220 pounds, Williams has the prototypical size for an NFL receiver, with speed and good hands to go along with his size. His game is often compared to Dez Bryant's. Williams is as intriguing a wide receiver prospect as any player in this draft, in what is a receiving class that is not as deep as it has been in previous years. A highlight reel:

Again, the Eagles' need for receivers is obvious. Williams could be a top 10 pick, so the Vikings may have to do some more losing for Williams to be an option.

Wilson is Florida's "other" corner opposite Jalen Tabor. Or IS he the "other" guy? According to at least one NFL executive, Wilson is the best cornerback in the country.

"I think Wilson is the best corner in the country. Tabor gets all of the hype but Wilson is better in every area," an NFL executive told NFL.com analyst Daniel Jeremiah.

And then there's this from NFL.com's Bucky Brooks:

Scouts descending on Florida's campus expect to come away convinced that Teez Tabor is the Gators' top cornerback prospect, but I've been hearing that UF's Quincy Wilson might be garnering more attention as a potential CB1. The 6-foot-1, 213-pounder has excellent size and length. He's a technician who's capable of snuffing out elite receivers on the island. An AFC college scouting director raved about Wilson's "physicality, toughness and instincts." In addition, he loved Wilson's competitiveness and that he asked coaches to allow him to take on the opponents' top receiver in certain games (see Ole Miss and Laquon Treadwell).

Hey wait... Competitiveness, you say? As we noted a couple weeks ago, what Jim Schwartz values in his cornerbacks is becoming clear. (Spoiler: It's competitiveness). A highlight reel:

To note, if any of the above looks familiar, it's because we have already profiled the above players in our 'Grocery Shopping' series, which can be found here.