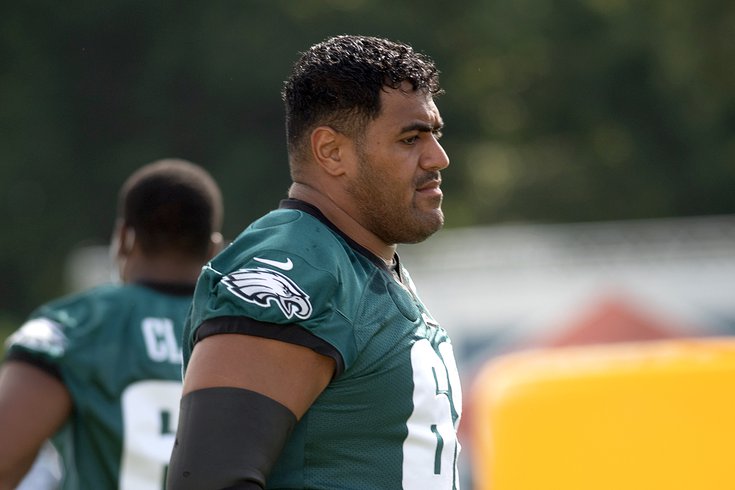 Give that man his starting LT job.

Day 5 of Philadelphia Eagles training camp is in the books. As always, we have practice notes.

• The biggest news of the day happened before the start of practice, when the Eagles revealed to reporters that DeVonta Smith is "week to week" with an MCL sprain. There's a report out there that says Smith will be out 2-3 weeks. We'll see about that. Two weeks feels optimistic to me, personally, but I don't think he's in any real danger of missing the start of the regular season.

Smith showed some nice things early in camp, but I wouldn't say he has stolen the show. Certainly, he can use all the practice time he can get, even if he's advanced for a rookie in terms of route running, fundamentals, etc.

In other injury news, today was Jalen Reagor's first day as a full practice participant. Ryan Kerrigan left practice early with what looked like an injury to his right hand.

• I though Jalen Hurts had his best day of camp so far today. His first pass of the day was to the sidelines to Travis Fulgham, who was closely guarded by Steve Nelson. The throw was placed high-ish and to the outside, which allowed Fulgham to use his size to shield Nelson from the ball and make the catch.

But just generally speaking, he was more accurate today than he has been all throughout camp. Even on a throw he missed today — a window throw to Fulgham in the end zone — Hurts had good velocity on the throw, and while it was behind Fulgham, it was still a catchable ball, but Fulgham couldn't adjust quickly enough to make the play.

Hurts still has a long way to go, in terms of accuracy and consistency, but today was a step in the right direction.

• They haven't even put the pads on yet, and I'm just about ready to call the LT competition for Jordan Mailata. It really hasn't been close, as Mailata has definitively outplayed Andre Dillard every single day, and he is also having the best camp of his career, by far.

In 1-on-1's today, Dillard had two reps. He held Josh Sweat on one, and Brandon Graham beat him on a push-pull move on the other. Meanwhile, Mailata won his matchups against Sweat and Derek Barnett.

The team won't call it anytime soon, and certainly not before they put the pads on (which should be tomorrow, by the way), but it's already crystal clear who the better football player is.

• In other 1-on-1 action, Fletcher Cox reminded everyone that he's the best player on the defense, with a quick inside move that beat Nate Herbig. Also, while Jack Driscoll has generally been good in pass protection throughout camp, he got undressed by Barnett today.

• Joe Flacco and Tyree Jackson had an impressive connection today. Flacco threw high over the middle to Jackson, who was running across the field. Jackson snatched the ball out of the air and turned up the field without breaking stride. Jackson is 6'7, 249, with good athleticism, and while his game needs serious refinement, if he continues to make plays like that, it's going to be an easy decision to keep him on the 53-man roster as a long-term developmental project.

• Nick Mullens has had a decent camp throwing the football, but he had one of the worst passes of camp today. He threw to the sidelines to Jhamon Ausbon, who was being covered by Zech McPhearson 1-on-1. McPhearson turned and made an easy interception on the underthrow. I also noticed McPhearson with a good jam on Hakeem Butler, who couldn't get off the line of scrimmage against McPhearson on the outside. I haven't seen Butler do anything in camp yet, by the way.

• Yesterday, Quez Watkins made a nice contested catch over Michael Jacquet. Today, he caught a short pass and showed some wiggle after the catch. He has only practiced two days so far, and has already shown more than John Hightower.

• The punt returners so far, with quick analysis:

That's how I'd have them ranked right now.