The Philadelphia Eagles conducted their 14th of 15 training camp practices on Monday, and they were forced inside the team's practice bubble for the first time all camp, due to heavy rainfall. As always, we have notes.

• As we noted over the weekend, the velocity Carson Wentz's passes is up, compared with previous training camps. While that was an objective statement made by Doug Pederson based on data, a more subjective opinion of Pederson's is that Wentz's accuracy is better as well. I agree.

In 2016, after getting a good look at Wentz's first training camp, I identified three weaknesses in his game:

• Consistent accuracy: Wentz has often been inaccurate during training camp. When he is off, he is most commonly overthrowing his receivers, missing them high. Doug Pederson attributed that to mechanics, timing, and not yet completely seeing what he's supposed to be seeing. In other words, when Wentz has a more solid grasp of where his receivers will be and what opposing defenses are trying to do to him, the thinking is that Wentz will settle in and become more accurate like he mostly was at North Dakota State. But for now, improvement in this area is clearly needed.

• The wobble: Wentz's passes have often wobbled. They still get there, but the wobble makes them more difficult to catch. When the weather becomes harsher, wobbly footballs are more prone to dying in the wind. Again, this is not something Wentz did much in college. Pederson attributed it to Wentz not yet being fully being up to speed mentally and believes the wobble will wane.

• Locking in: There have been times when Wentz will zero in on a receiver, allowing the defense to anticipate where he's going with the football.

His accuracy has indeed improved drastically, in my view, as the overthrows are long gone, as is the wobble, and he is no longer locking in on one specific receiver. If you were to ask me now to list his weaknesses, the only thing I could come up with is that he tore his ACL a year ago. Otherwise, I got nothing.

And oh by the way, the knee is looking pretty good.

• An interesting development is that Avonte Maddox has been getting first team reps in the slot over Sidney Jones. Today, Maddox had a good day. He had a nice pass breakup in the back of the end zone while covering Shelton Gibson. He also timed out a blitz nicely that forced a quick throw.

Maddox has a knack for blitzing. In 2017, he had 4 sacks for Pitt. In 2016, he had 2.5. The following is a breakdown by Fran Duffy and Greg Cosell on Maddox. The entire thing is good (and worth your time), but I have it set below to begin where they show Maddox's blitzing savvy:

As we noted a year ago, Jim Schwartz has a history of playing rookie cornerbacks early, and he doesn't care what round they were drafted in. If Maddox is better than Jones in the slot, then he'll play.

To note, we're not saying Maddox has been better. In fact, Jones had a pick six today when he sold that he was in man coverage and then jumped an underneath route for the pick. But in my opinion, this is a development to keep an eye on.

• In addition to Maddox and Jones, the secondary as a whole dominated the Eagles' offense today. Some examples:

• One corner who did not have a great day today was De'Vante Bausby. His lowlight came on a Gibson touchdown reception in which Bausby wasn't even close. Bausby had a great spring, but that has not carried over into training camp. At one point I was beginning to think of Bausby as a lock to make the team. Now, I'm not completely sold.

• One player who has gotten a lot of hype by the media (self included) has been G/T Matt Pryor. He is dominant in 1-on-1's, but less so in 11-on-11's, where he's just been "good." Today, rookie UDFA DT Bruce Hector got the best of Pryor on his way to a sack. Hector looks like a player.

• After starting off camp going a perfect 29/29, Jake Elliott had a rough day today, when he missed four out of nine field goal attempts.

Jason Peters is going to have to remind Elliott that missed field goals will not be tolerated. 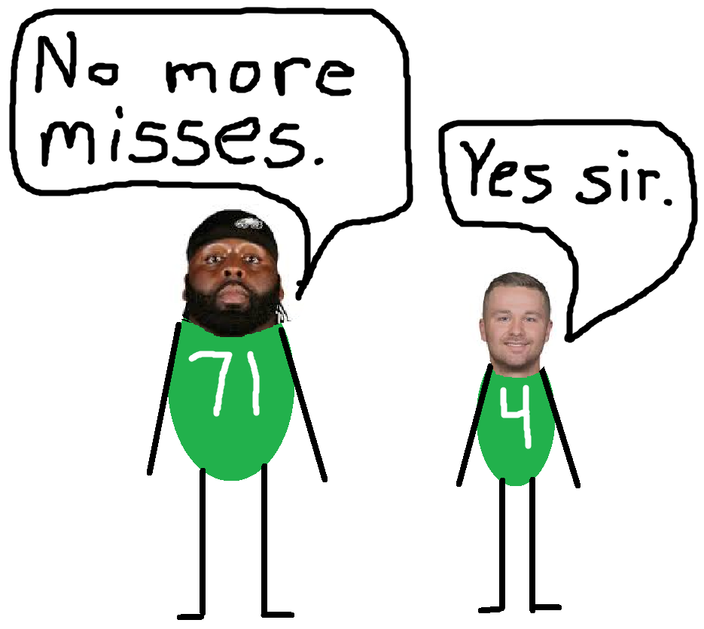 • Josh Adams left practice early with some sort of lower body injury. He caught a pass in the flat, made a couple moves, and was walking a little gimpy after the play. It didn't look serious. We'll see.