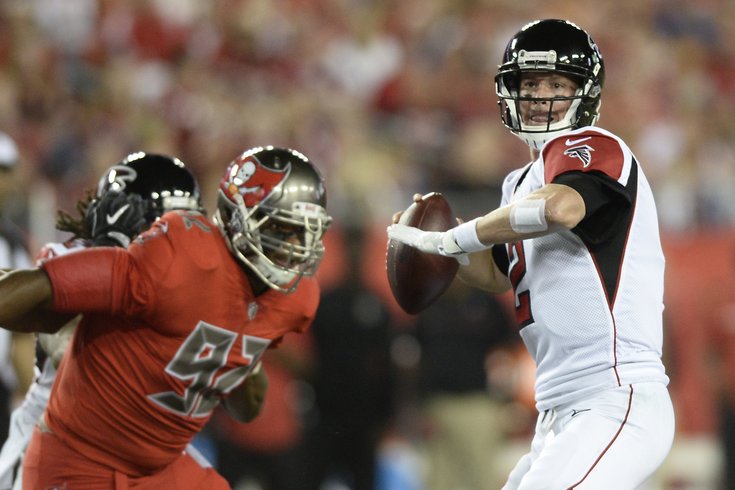 Atlanta Falcons quarterback Matt Ryan in action against the Bucs.

The Eagles are back at .500 for the first time since the start of the 2016 season -- and things aren't going to get any easier from here on out. On Sunday, they'll host Penn Charter grad (and early NFL MVP candidate) Matt Ryan, who will lead the high-flying Falcons offense into Lincoln Financial Field against his hometown team.

It'll be another test for Jim Schwartz and the Eagles defense against the league's top-scoring team, one that they'll need to pass in order to avoiding falling even further out of the playoff picture. And a big day from the D can go a long way in this one.

Meanwhile, Carson Wentz and the Eagles offense will look to get back on track after struggling over the last month. Recently, he's found himself down early in games and Doug Pederson has been forced to rely on his rookie quarterback perhaps more than he would like.

As a result, well, just see for yourself...

This completely lacks context, but here are Carson Wentz's numbers his first 4 games vs. his last 4: pic.twitter.com/4HT64IhjER

And now, here's what we see happening on Sunday in what almost certainly guarantees to be a high scoring affair.

It's pretty easy to look at this game and go, "OMG Julio Jones is going to tear the Eagles' secondary apart!" And he might. He certainly did just that in Week 1 against the Eagles a year ago. That said, the Eagles' defense has generally stepped up this season against their best offensive competition.

While the Falcons are the top scoring offense in the NFL (33.9 points per game), they are also the 28th scoring defense (28.8 points allowed per game).

In their three home games this season, the Eagles have outscored their opponents 84-23, and have absolutely stomped all over opposing offenses. I'll allow myself one Eagles "hunch pick" per season. This is it.

With division losses the last few weeks, the Eagles are pretty much in must-win territory now. That’s bad news with Julio Jones coming to town against a shaky group of corners. I still think about this GIF once in a while, and how it’s incredible that we have human beings capable of something like this:

Can Carson Wentz avoid big mistakes and string a clean game together? The loss wasn’t entirely his fault last week, but those two early interceptions were pretty brutal in what ended up being a toss-up game. This is an Atlanta defense that you can throw the ball against a little, so I figure this will be a shootout.

It just feels like the Eagles should be better than a .500 team. Tentatively, we’ll say that Wentz finally delivers in the fourth quarter. One other prediction: Bryce Treggs catches a long touchdown pass, which means that work on his Hall of Fame bust will begin on Monday morning.

This is good news, Eagles fans. My picks have been so spectacularly wrong -- I haven't gotten one right since the Bears game and I wish that was a joke -- that there's now a 99.9% chance the Eagles win on Sunday. And that would hardly be surprise.

The Eagles are due for a game like the one's they were playing before the bye week, back when their name was still being mentioned in the same sentence as things like, "among the best teams in football." Their win over the Vikings -- the Birds' only victory since that ill-timed bye -- is looking less and less impressive by the week. BUT ... they're still undefeated at home and despite losses in four of their last five games, the Eagles have had a chance to win or tie late in each. Furthermore, they're average margin of defeat in their four losses is just 4.75 points per game.

But this Falcons team can score. Their 33.9 PPG is by far the best in the NFL -- and Matt Ryan has played a big part in that. Through nine games this year, he's thrown for 2,980 yards, 23 touchdowns and just four interceptions.

The question in this one, however, is whether or not their secondary will be able to keep Ryan's receivers, specifically Julio Jones, in check for four quarters. They haven't looked the same since losing CB Ron Brooks for the season to a torn quad. Two of the Eagles three worst performances in terms of pass yards allowed came in the two weeks since his injury -- both were also games in which the Birds were down early, meaning the opposition was more like to lean on the ground game than the passing game.

Add to that the fact that starting CB Leads McKelvin (hamstring) and backup safety Terrence Brooks (hamstring) are both listed as questionable, and it good be a big day for Jones. Of the two, McKelvin is more likely to play on Sunday. He was a limited participant in practice on Thursday and Friday, while Brooks has yet to return to the field.

The Falcons defense, especially one that has injury concerns of its own, is almost as bad as its offense is good. They're 28th in the NFL in points allowed (28.8 PPG). They also have allowed the most passing touchdowns (23, the same number as they've scored) and the second most passing yards (2,609). I just don't think the Birds will be able to keep up in this one.