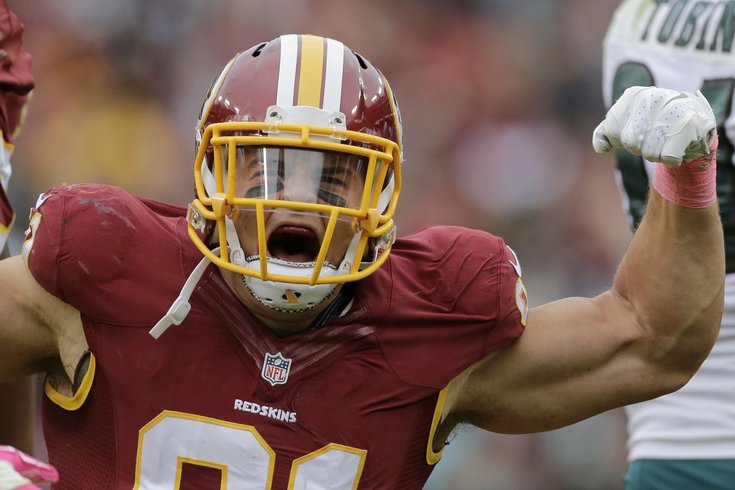 Ryan Kerrigan will be the first test for Eagles rookie RT Halapoulivaati Vaitai.

After their first letdown of the season, the Philadelphia Eagles will head down to Landover, Maryland to take on the Redskins in an important divisional matchup. Here are five matchups to watch this Sunday.

In other words, the Redskins have a pair of good edge rushers who have both made their fair share of big plays against Philly. With Lane Johnson suspended, rookie RT Halapoulivaati Vaitai will face both of them on Sunday.

"There will be times when tight ends will be there, running backs will be there, or we'll slide in that direction," said Doug Pederson when asked if the Eagles would give Vaitai a little extra help. "But it's kind of like with Carson, too. We’re not just going to handcuff the kid so much he can't play and use his natural God-given instincts and abilities. It's something we'll monitor during the game more so than during the week."

Vaitai has appeared on the game day inactive list in each of the Eagles' first four games. This will obviously be a huge test for him.

2) The Eagles' rushing attack vs. the Redskins' rush defense

Here is where the Redskins rank defensively against the run:

My conclusion: The Redskins are bad are stopping the run.

The Eagles have been slightly above average running the ball so far this season. To my surprise, they're 10th in rushing yards per game, with 118.5, and they're tied for 13th in yards per attempt, with 4.1.

This is a matchup where the Eagles must get their ground game going.

3) The Redskins' linebackers and safeties vs. the Eagles' tight ends

Back in early August, we suggested that the Eagles should run their offense through their three talented tight ends in Zach Ertz, Brent Celek, and Trey Burton. Last week against the Lions was the first time the Eagles had Ertz, Celek, and Burton all healthy. We projected that the Eagles would run quite a few three tight end sets, but that did not happen as much as anticipated.

"I felt like going into this game, that our tight ends against their linebackers, for instance, was a match-up in our favor," said Pederson in his Monday press conference after the Lions game. "Could I have called more middle of the field with our tight ends? Yeah, but we were getting a couple calls against us at that time, too."

Additionally, the Redskins will be without their two starting safeties, DeAngelo Hall and David Bruton. Linebacker/safety hybrid Su'a Cravens, meanwhile, missed last week's game against the Ravens with a concussion, and has been a limited participant in practice so far this week. Otherwise, most linebackers are going to be overmatched against Ertz and Burton in the passing game.

In five games so far this season, Kirk Cousins has been sacked just eight times, as the Redskins do a very good job in pass protection. Conversely, the Eagles have played one fewer game than most of the rest of the league, and defensively they are still tied for fifth in the NFL with 14 sacks.

"They got some big guys up front," said Jim Schwartz. "They have a good blend of experience. It starts with the left tackle [Trent Williams]. He's a Pro Bowl player. If you talk about offensive line play, you can probably start there. Teams have ability to rely on one guy they think that can take a rusher out, then they can take their scheme other places. I like our pass rush. I think that's a great matchup in this game, our ability to generate a pass rush, our ability to blitz. Those kind of things will go a long way in determining who the winner in this game is in that matchup between the O-line and D-line."

The one area where there may be a weakness in the Redskins' OL is at center and left guard. This could be a game where the Eagles need production from Fletcher Cox and Bennie Logan on the interior.

"It doesn't just go to pass game," added Schwartz. "It's run game, also. They've been able to methodically move those chains. We've been good at creating some lost-yardage plays. That will be a good battle, also."

The Redskins are going to try to figure out ways they can get Mychal Kendricks on the field, and when they do, they're going to attack him, as Kendricks has been a mess this year. The obvious player the Redskins would likely try to get matched up on Kendricks would be Jordan Reed, but Reed is unlikely to play as he was diagnosed with a concussion on Thursday. The Redskins have had success with Reed against Kendricks in the past.

With Reed likely out, the Redskins could try to find ways to get Kendricks matched up on RB Chris Thompson, who is a player similar to the Lions' Theo Riddick, in that he is a good receiver out of the backfield.

Of course, if you're Jim Schwartz, there's only one way to be sure Kendricks doesn't get abused again this Sunday (hint hint).