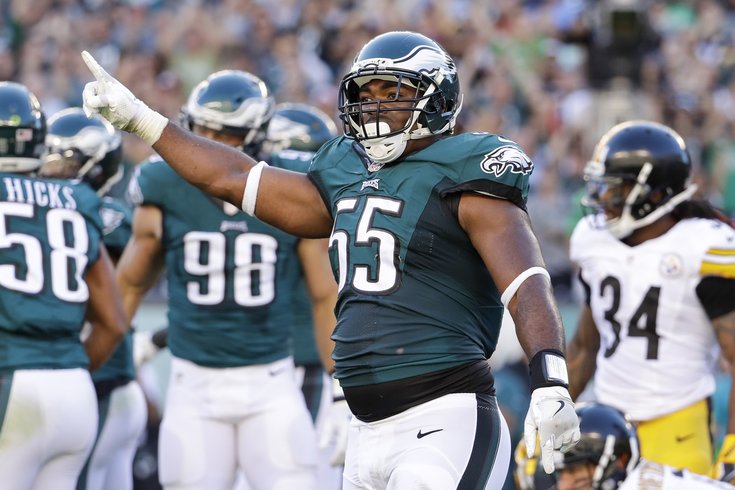 Brandon Graham is having the best season of his career, by far.

The Philadelphia Eagles are a quarter of the way through their first season under Doug Pederson, and are off to a surprising 3-1 start. Now feels like a good time to grade the Eagles' first quarter performances, individually.

We showed at length the effect Brandon Graham has had on opposing offenses so far this season. We can all stop talking about Earl Thomas and Jason Pierre-Paul at this point, and just appreciate Graham for the really good player he has become.

MORE ON THE EAGLES: Redskins could be without best offensive weapon Sunday vs. Eagles | Carson Wentz leaves a big tip for a fan at his alma mater | DeSean Jackson open to return to the Eagles in free agency | Week 6 NFL picks | Eagles power ranking roundup: Birds tumble | Film breakdown: Did Wentz make the right throw on game-ending interception vs. Lions?

Cox was named the NFC Defensive Player of the Month for September. He most certainly has not slacked off since receiving a lucrative contract extension this offseason,\ and is a piece the Eagles can build around for the next decade.

Logan has two sacks, two tackles for loss, a forced fumble, and a huuuuuge blocked field goal on the Steelers' opening drive Week 3. The Eagles drafted Logan to be a two-gapping 3-4 NT, but he has adjusted well to Jim Schwartz's attack-style defense, and is a big reason for the Eagles success against the run.

As usual, Curry isn't getting as much use as he should, although part of that may be because the Eagles don't want Curry in on run downs. Curry was a little banged-up to begin the season, but he got good pressure against the Lions in limited snaps.

He has a tackle, and it was for a loss too!

..which means his production is up 4000 percent.

There's a noticeable difference when Allen enters the game for Cox or Logan, which is understandable. Allen is a good backup, but that's probably his ceiling.

Vaeao made a huge play on his sack/fumble of Jay Cutler in the Bears game, but has otherwise been little more than a snap eater for Fletcher Cox, whenever he needs a breather.

While Hicks hasn't yet made the splash plays that he did in his rookie season a year ago, he has been excellent in coverage in the middle of the Eagles' defense.

Bradham was a lesser-publicized signing by the Eagles this offseason, but he has turned out to be a very good football player, "dumbass" or not. Bradham was all over the field in the second half of the Lions game, collecting three tackles for loss. For a guy who allegedly assaulted a cabana boy over an umbrella and didn't know he had a loaded gun in his carry-on at the airport, Bradham has shown to be a smart, instinctual player.

Tulloch seems to be as advertised. He's good enough against the run, but you do not want him covering running backs or tight ends in the passing game.

There are some who feel that Jalen Mills is better than McKelvin. I couldn't disagree more. McKelvin hasn't often been healthy, but when he has, he has been the Eagles' best cover corner. That said, the Eagles need to upgrade their corners this offseason.

Carroll is essentially what he was a year ago – a competent No. 2 corner who works hard, won't often be beaten deep, and is good in run support. However, he has given up a lot of passes underneath and has been flagged for three pass interference calls so far this season.

Again, the Eagles could search for help across the board at corner this offseason, as Brooks has struggled in coverage.

I had two concerns about Jalen Mills when he was drafted:

Concern No. 1 has not been an issue, as Mills has proven to be a competitive player in the Eagles' secondary. However, concern No. 2 has indeed been an issue. As we said back in training camp, Mills is probably a slot corner only, and he is likely to struggle as long as he has to play on the outside.

Jenkins has been really, really good. His numbers aren't eye-popping (although he does have an impressive four pass breakups). He lacks big plays so far this season, but he is always around the ball. The big plays will come.

Like Bradham, McLeod was a very good free agent addition this offseason by the Eagles. McLeod leads the team with 23 tackles and two interceptions.