Despite historic start, Wentz not the favorite to win offensive rookie of year 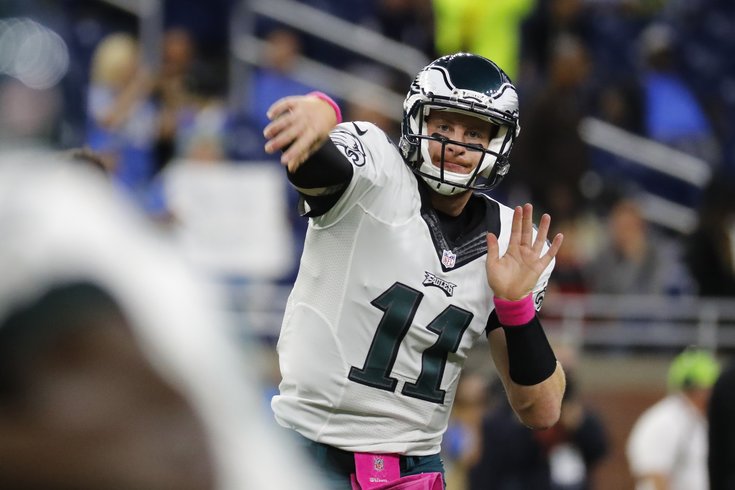 Philadelphia Eagles quarterback Carson Wentz has been really good. But that might not be enough to make him the Eagles first-ever rookie of the year.

Every year since 1967, the Associated Press NFL Rookie of the Year has been handed out to the two players – one on offense and one on defense – who have performed the best in their first professional season.

But on the offensive side of the ball, the award has been largely given to running backs (and the occasional wide receiver), with just one quarterback (Dennis Shaw, 1970) winning offensive rookie of the year during its first 37 years. That changed in 2004 when Ben Roethlisberger became the first QB since Shaw to win the award. Over the last 12 years, six of the winners have been quarterbacks, four have been running backs and two have been wide receivers.

It's clearly indicative of the changes that have taken place in the NFL recently, with more teams relying on throwing the ball than running. It also shows that teams are doing something more often than they have in previous years -- allowing rookie quarterbacks to start right away, rather than having them sit for a year or two to learn the offense and adapt to life in the NFL.

In the case of the 2016 Philadelphia Eagles, their original plan was to let rookie Carson Wentz sit behind Sam Bradford, but that plan changed when they were able to get a first-round pick out of the Vikings in exchange for Bradford.

And because of that, there's a chance that the Birds have their first AP Rookie of the Year ... ever.

That's right – the Eagles have never, in the nearly 50-year history of the award, had a player (offensive or defensive) named the NFL's top rookie. But that could change this year with Wentz, who has a 3-1 record as a starter and has thrown seven touchdowns to just one interception through the first quarter of his rookie year. He's set new rookie records almost every week and is currently fifth among all NFL QBs in passer rating (103.5).

But he isn't the favorite to win rookie of the year, at least according to Bovada.

That would be Dallas Cowboys rookie running back Ezekiel Elliot, who has 546 yards on 109 carries (5 YPC) and five touchdowns. He's actually a 1/2 favorite to win the award.

And after suffering the first loss of his career on Sunday, Wentz is no longer alone in second among favorites to win the award. He's joined by Elliot's teammate in Dallas, QB Dak Prescott (7 total TDs, 0 INT, 101.5 passer rating).

Here's look at how Bovada sees it:

Is that Philly's Will Fuller I see?

Considering the winner is decided by a 50-person panel of voters, you would think that Dak and Elliot would split some of the votes, potentially allowing Wentz to move ahead. Furthermore, with Tony Romo expected back at some point this season, it's fair to say that Prescott's odds could fall dramatically in the weeks to come.

Personally, I think the difficulty of playing QB, especially as a rookie in an entirely new system, is much more difficult than running back. That's not to take anything away from what Elliot has done this season, nor is it a homer opinion suggesting that Wentz should be running away with the award. I have less of a problem with Wentz and Prescott being tied than I do with Elliot being such a heavy favorite over a pair of quarterbacks who are playing like anything but rookies.