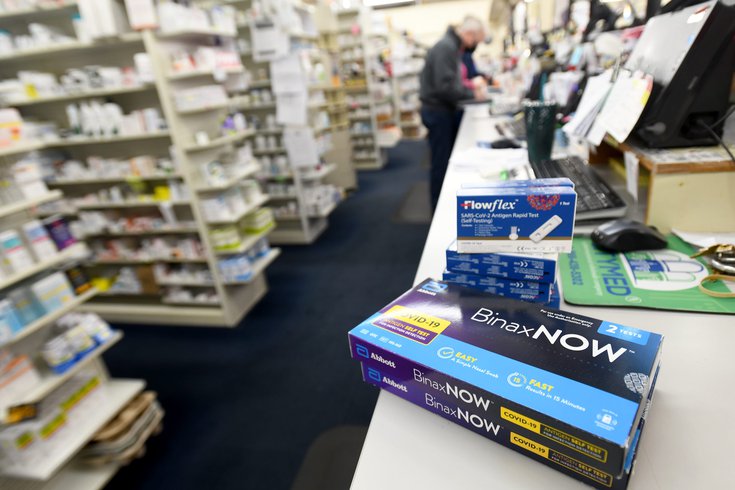 ECRI, a patient safety group based in Plymouth Meeting, Montgomery County, recently released a report ranking seven popular COVID-19 at-home rapid antigen test kits based on usability, negative attributes, and positive attributes. Officials within the organization say that while all of the tests received an emergency-use authorization from the FDA, if given a choice, it is better to choose a highly ranked test kit.

On/Go is the highest ranked at-home COVID-19 test, according to a recent report from ECRI, a patient safety group based in Plymouth Meeting, Montgomery County. The group recently released a report on seven popular brands of rapid antigen test kits, ranking them based on usability.

The report comes as people across the region continue to struggle to find at-home test kits amid the surge in coronavirus infections driven by the omicron variant. Many brick-and-mortar stores are quickly selling out of test kits, and online retailers implemented limits on sales over the Christmas and New Year's holidays as supplies dwindled.

As omicron continues to spread around the region, ECRI wants to ensure that those who purchase at-home test kits are buying ones that are easy to use and provide accurate results.

"ECRI's evaluation showed that some rapid tests are much easier to use than others," said Marcus Schabaker, president and CEO of ECRI. "If given an option, consumers should choose the test that ranked highly. Difficultly using a test can lead to errors."

Although at-home rapid test results are not included in county and statewide COVID-19 case counts, if residents need to access rapid testing, it's important to know which kits provide the simplest way to get results.

ECRI placed each test kit on a scale from not acceptable, marginal, and acceptable. Only one of the seven — BD Veritor's test kit — ranked below "acceptable" with a usability ranking of 51.4%.

It's researcher's basis for the rating? While the test asks users to download an app to receive test results, the packaging does not include any paper instructions. Further, while the instructional video within the app provides a lot of useful information, users can not go back to the video after they've clicked away from it.

The test itself uses two lines while waiting for a readout, while most other at-home rapids only have one. In ECRI's analysis of the kit, researchers believe it can lead to some unnecessary anxiety surrounding the wait.

On/Go, which was ranked highest at 82.9% usability, only has one negative attribute: while the app allows users to upload photos of their test results, it does not provide an interpretation of that photo. Given that results are ready to read out after only 10 minutes, On/Go provides one of the simplest ways to test for COVID-19 in a hurry.

This can be helpful, especially as agencies, like the Centers for Disease Control and Prevention, update their quarantine and testing guidances.

CareStart received an 80.8% usability ranking, with a downside identical to that of On/Go. Both test kits include a QR code on the back of the packaging that links to the same app to find instructional videos and upload a photo.

Flowflex was also ranked high, at 79.5% usability. As the only test kit that includes a single test, Flowflex provides a readout of results after 15 minutes. It has a few downsides though: ECRI notes that "placing the dropper tip into the buffer vial is a little difficult, and might be a challenge for those with poor motor control."

Further, a QR code provided on the packaging links to the same printed instructions as those that are included in the box.

QuickVue received a 75.6% usability ranking, largely because the paper test strip is easily touched by the user, and because some of the packaging is difficult to open. Still, the readout time is only 10 minutes, and both the printed and video instructions are easy to comprehend.

BinaxNow ranked relatively high, though ECRI researchers said that it was one of the more difficult tests to perform. With a usability ranking of 73.3%, the BinaxNow card requires users to drip 6 small drops of the testing liquid onto the reading card, then fold over the swab while waiting for results. ECRI noted that this could prove difficult, as it takes dexterity and good vision.

InteliSwab's major downfall is the wait time, according to ECRI. Compared to the other test kits available, InteliSwab requires a 30 minute wait for results. It also requires 15 nasal swabs, which is much more than most of the other kits, which only require about five. It received a 73.3% usability score.

According to ECRI's researchers, any at-home test available is FDA certified for emergency use, so those who are not presented with a choice in purchasing a rapid test kit can feel comfortable and safe to purchase any of these brands. But for those who do have the opportunity to choose which test kit to buy, the agency does suggest purchasing the highest ranking kits.

For those looking for COVID-19 testing, over-the-counter at-home kits will soon be covered by private insurance, and White House officials recently announced that free tests will soon be available to order online. A FEMA testing site also recently opened in Southwest Philly at Cibotti Recreation Center.