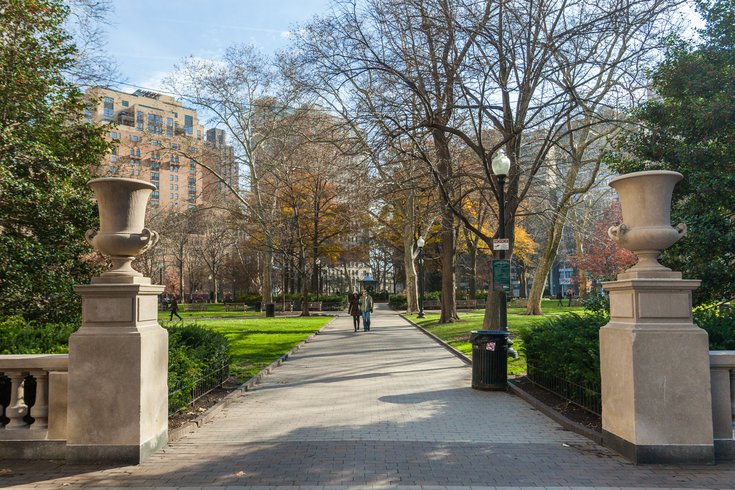 In a recent study done by the Center of Researching Great Innovation (or C.O.R.G.I.), it was discovered that Philadelphia's Rittenhouse Square neighborhood had accrued more corgis per capita (C.P.C.) than any other area in the historic city.

That may or may not be a C.O.R.G.I. certified Actual Real Fact (A.R.F.), but it certainly feels true. Because living in the Rittenhouse Square neighborhood, I am straight up flush with corgis.

And that should be enough to prove that living in my neighborhood is absolutely the best. We’ve got corgis with long tails, short tails, long fox-like ears, multicolored fur, and no matter the corgi … you are guaranteed impossibly small stumpy legs supporting chunky bodies with eternally happy dispositions.

A walk through Rittenhouse Square Park in the morning, afternoon or night, almost guarantees a run in with a corgi, which envelopes you in a safe bubble granting you an absolutely flawless day. But Rittenhouse is more than just packs of roving corgis running and frolicking in the streets. There are a lot of reasons why I adore my neighborhood, and why you should visit sometime. Corgis are just one of them.

So the area of Philadelphia that’s designated as Rittenhouse Square is a pretty small neighborhood. Depending on who you ask, you’re looking at a square shaped bit of space from Chestnut Street to South Street and 21st to Broad Street. So we don’t have a lot of street to play with here.

But even so, some of my favorites are here, streets that run the length of Center City, cut off into many little side streets by bigger city blocks, all just lovely.

• Addison Street, where it is always Christmas, with strung up white lights glimmering all year.

In addition to a gorgeous, giant Barnes & Noble located right across the street from Rittenhouse Square Park, the neighborhood is home to two fantastic used bookshops, Whodunit and Neighborhood Books, as well as the beautiful indie bookshop Joseph Fox Books and Fat Jack’s Comic Crypt, where the staff is always friendly and warm. Let’s recap.

And book bonus (FYI a “book bonus” is the best kind of bonus), The Rosenbach Museum and Library. You can’t buy those old books, but tucked away in this incredible museum are letters and manuscripts from William Wordsworth, John Keats, Charles Dickens, Joseph Conrad… the list goes on.

I mean, technically the Kimmel Center, Academy of Music and Prince Music Theater are in Rittenhouse. And so is the University of the Arts, the school that teaches some the talented people who grace those stages. Further West of Broad, there’s the Plays & Players Theater, the Philadelphia Art Alliance, and The Adrienne Theater (although I think it’s like, a block out of the neighborhood, technically, I’ll let you have that one Fitler Square). I’m saying technically here a lot, aren’t I?

And man, if you want to see some art that doesn’t feature people singing, acting or dancing … you can check out The Print Center, which always has gorgeous pieces of art to scope out. Though I suppose those could be paintings of people acting, singing, dancing … whatever. You get what I’m saying.

The neighborhood is home to many fantastic restaurants. Alma De Cuba, Audrey Claire, Tinto, Parc, The Dandelion, Pumpkin … the list goes on. Plenty of places that Yelp has listed with multiple dollars signs, because they’re a bit expensive. Because damn. That food.

I prefer hitting up the smaller guys. Like Federal Donuts (yeah yeah, I know you have one too South Philly, University City and North Philly, whatever!), Smiths, Pub & Kitchen, Seafood Unlimited, Devil’s Alley, and of course … Good Dog.

Excuse me while I mourn the loss of Brick.

Wait … what? Sorry. I’ve just been informed by Sarah Baicker that Grace Tavern, one of our favorite haunts, technically isn’t in Rittenhouse Square.

You win this round, Graduate Hospital.

Sure, Walnut Street is chock full of fancy big-name retail shops. But let’s skip those, okay? Rittenhouse has some insanely charming little shops, like Omoi (my favorite shop in the entire city, end of story), Tselaine, Aoki and Loop (again, I know, across South Street, so many Graduate Hospital, whatever, let’s battle).

And we also have Long & the Tooth, an awesome used record store. Yeah, I know Old City. You have AKA Music. Fine. I’ll give you that one.

What? Old City and Northern Liberties have better boutique shopping? Because 3rd and 2nd streets are basically all boutiques? Yes, those two neighborhoods are awesome for that. You can have that one too.

The Actual Park Part of the Neighborhood

So there’s also this park in Rittenhouse. It’s not all that big compared to other city parks. But around it, you can find an awesome farmer’s market (where’s yours, Washington Square?), the occasional art gallery and plant sale, open grassy spaces perfect for picnics or sunbathing, and the sporadic swing/jazz dance class happening on the stone walkways in the center of the square.

And in the Fall and Winter, when the leaves are changing colors and the neighborhood comes out to create awesome creations in the snow, it is just my favorite place.

The wooden benches that line the walkways through the square are one of my favorite places in the city for people watching, and for getting food stolen by squirrels.

This one time, a rather large fat squirrel stole a pretzel that I had next to me, and ran away with it. A little old lady who was sitting across from me cackled madly. It was during the first few months of living in Philadelphia, and I think that’s when I knew I’d have to stay here.

It was a powerful moment.

I’ve rambled enough, and I grow sleepy. What are your favorite things about the Rittenhouse neighborhood?