Examining the Eagles' penalty-negated touchdown against the Redskins 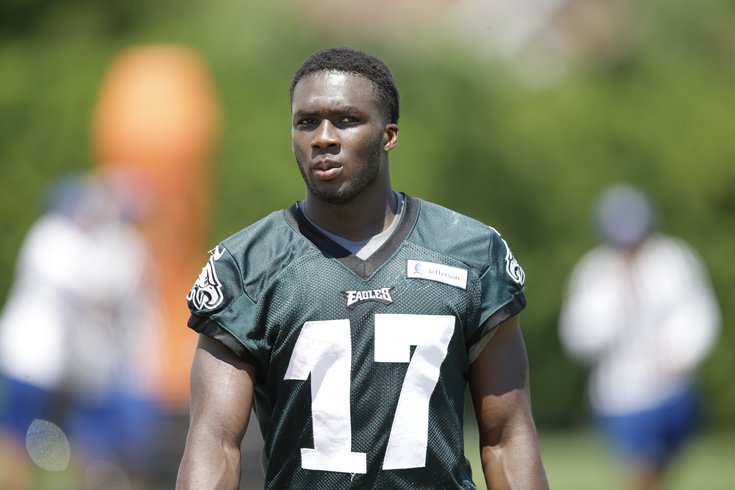 The Eagles have had trouble throwing, catching, blocking, and even lining up properly this season.

With under two minutes left in the first half last Sunday against Washington, the Eagles were driving after a long punt return by Darren Sproles put them in great field position. At 1st and 10 from the 11, Sam Bradford threw a great pass to a diving Zach Ertz for a touchdown in the front corner of the end zone. Finally, some "execution!"

However, the penalty called on Agholor was very iffy. The officials called Agholor for "covering up the tight end," meaning that the officials deemed he was up on the line of scrimmage, when he should have been at least a yard off of it. A screen shot: 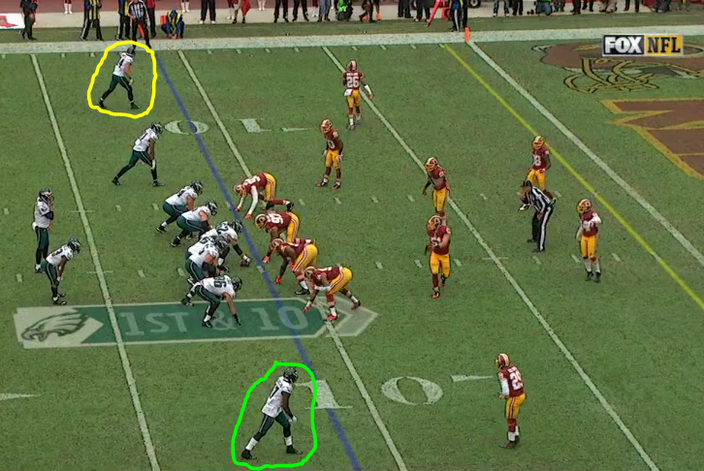 At the top of the screen, you can see Riley Cooper circled in yellow asking the side judge if he's far enough up on the line to count as one of the seven required players on the line of scrimmage. The side judge agreed that he was. A few of you felt that maybe Cooper was at fault on this play. He was not. At the bottom of the screen, circled in green, Agholor should be lined up at least a yard behind the line of scrimmage, noted by the blue line. It's close.

Agholor noted today that he communicated with the official pre-snap, who indicated that he was lined up properly.

"I thought I did a good job telling him I was off the ball," said Agholor. "I can't leave it up to the refs... As a receiver, you get there, and if you're the closest guy (to the sideline), they expect you to be the guy (up on the line of scrimmage). So you say if you're on or off. I tried to communicate, but I have to do a better job of that."

Agholor said the official signaled back that he was OK. He noted that if the receiver is not in the right position, the official will let them know. "They give you a 'back up' sign," said Agholor.

Here's Agholor signaling to the official:

As you can see, it's quick. If the official had told Agholor to back up, he would not have been able to move back and re-set before the ball was snapped anyway.

Still, that is one really ticky-tack call in a game that was filled with them, on both sides. The NFL is having issues with that so far this season, as games are taking longer because of a significant rise in called penalties.

Apparently, every side judge kind of has their own set of rules for where receivers need to be lined up, much like MLB umpires all have their own individual strike zones. "Some guys are a little bit more lenient, some guys want you clearly off, some guys let you have that blade of grass, but at the end of the day, the most important thing is that I cannot leave anything up to an official," said Agholor. "I need to make sure I'm clearly off."

"Honestly, I thought Nelson was off the ball," said Jordan Matthews. "I thought it was just tight, and they ended up calling him for it."

On the one hand, the Eagles can't get out of their own way offensively this season, and mistakes like this are killers. Agholor is correct that he cannot leave it up to the officials on where he lines up. On the other hand, that side judge needs to chill out.