Breaking down the Eagles' final defensive drive vs. Redskins 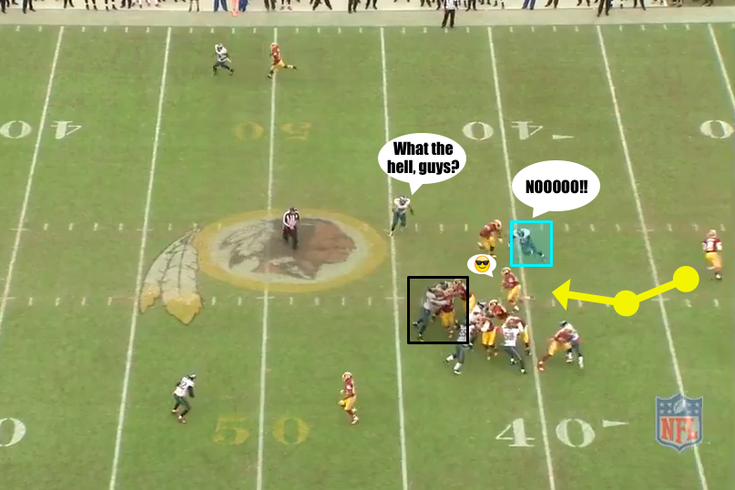 That's quite a hole for Alfred Morris to run through.

The Eagles' front seven, when healthy, is not only the team's greatest strength, but also one of the best run-stopping units in the NFL. The Eagles currently rank 13th in the NFL in rushing yards allowed per game, but that is somewhat skewed due to the fact that they've had to play from behind in three of their four games, allowing opposing offenses to play a more conservative, run-heavy style.

They also allow the opposition to run more offensive plays than almost any other team in the league, which further inflates the yards-per-game number.

But when you use the more accurate yards-per-attempt number, the Eagles' run defense jumps to third in the NFL, allowing just 3.3 yards per carry. In other words, it's really good.

That's why it was so disheartening to watch the Redskins' game-winning drive late in the fourth quarter of Sunday's 23-20 loss in Washington. Running backs Alfred Morris and Chris Thompson combined for 41 rushing yards on the drive, including two big first down runs by Morris.

It's those plays, not any of QB Kirk Cousins' six completed passes, that defensive coordinator Billy Davis would like to have back.

“If you ask me specifically about the plays on that drive, I think two runs hurt us," Davis said Tuesday. "They had two for about eight to 12 yards. They hadn’t had those earlier and that was kind of a key point to us getting them to third down. Now we weren’t as good as we need to be, or have been, on third down. But that was, if I had one thing I wish we were better at, it was third down and how we get ourselves off the field on third down.

“Specifically on that last drive, a couple penalties hurt us, and a couple of the runs hurt us.”

Of the two runs in question -- they were for 16 and 13 yards, respectively -- it was the latter that really hurt the Eagles. And although his defense had already been out there for close to 60 plays when the ill-fated drive began, he swears the late letdown was not a result of the players being tired.

“No, I don’t think it was ‘tired.’ I think it was technique," Davis said. "We got out of a gap on one of the long runs. On the other one, I wish I had a better call in, because that particular structure vs. the call I had up, isn’t our best call. We have better calls, but I can do that for a lot of times. You make your call, and the structure that they give you is what you have to play. So that run play, I wish I had a better call in."

Let's focus on the play in which one of the lineman missed his gap assignment, because the other one was just a standard sweep play in which Morris was able to get the edge and turn it up field. It was first and long, and with hindsight being 20-20 and all, I'm not going to crush the coordinator for thinking he could have called a better play.

But the other run, which went for 13 yards and a first down, should have been stopped for only a short gain. Instead, it moved Washington into Eagles territory and helped keep their drive alive.

"We just got out of our gap, which we hadn't done much of the whole night," Davis added. "That is one of the things that our D‑line and linebackers have been great at: aligning and holding on to their position, and that's why we've been so strong at the run game."

Here's a look at how both sides were lined up prior to the play: 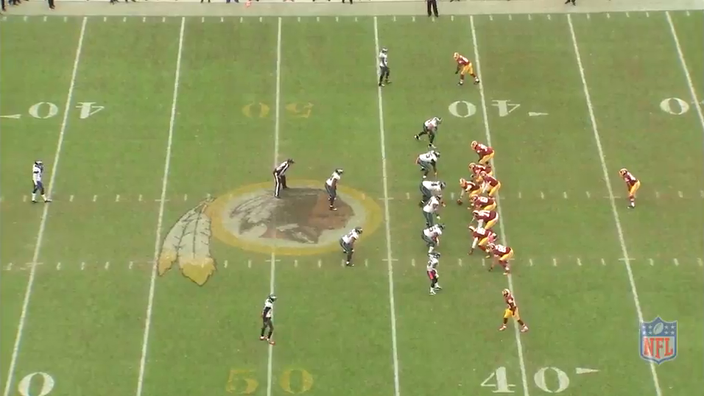 Beau Allen is lined up opposite the ball, just off the hash. He has Vinny Curry to his left, and Connor Barwin on the outside. DeMeco Ryans is lined up directly behind Allen. 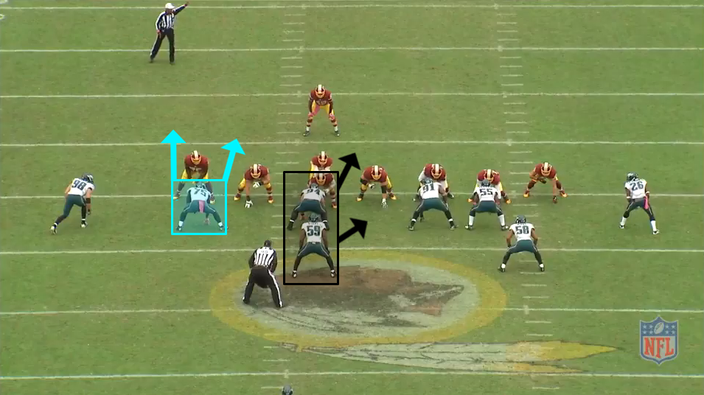 As soon as it's snapped, the entire defensive line begins shifting to it's right. It seems like that's the play Billy Davis wanted, almost immediately, you can see Vinny Curry try to get around the outside of the Redskins right tackle.

Because the Eagles utilize a two-gap front, Curry's main responsibility likely should have been to engage the tackle instead of trying to run around him to the outside. It seems like Curry -- always known more for his pass rushing skills, and perhaps anticipating a play-action bootleg back to his side -- is at fault here. 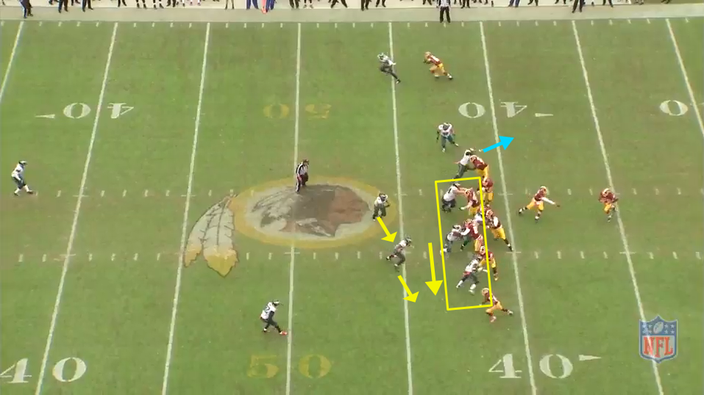 It doesn't take long for the hole to develop for Morris, who cuts back to his right after seeing that Curry is sealed off on the edge. 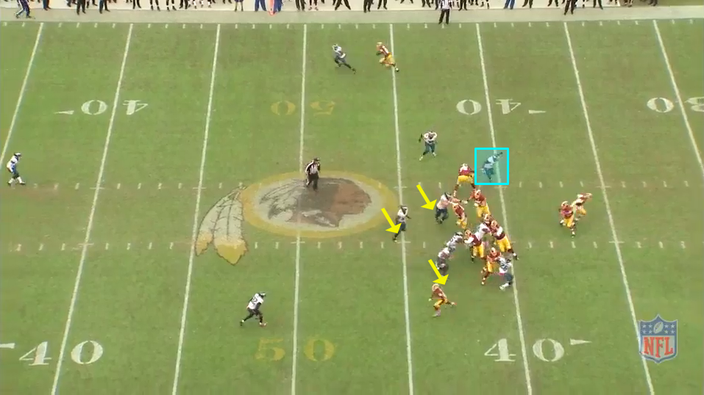 Here's a look from a different angle, and you can really see just how far out of place Curry appears to be: 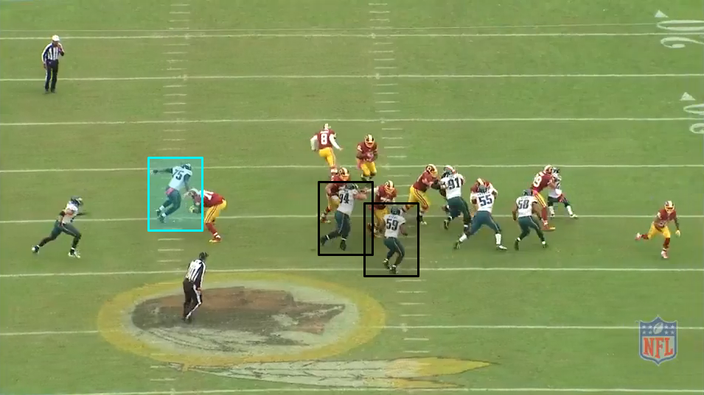 By this point, the Eagles stand little chance of stopping Morris before he hits the second level. As Morris hits the hole, there are six Eagles players clogging up near side, leaving Connor Barwin and a ref in the best position to make the play. 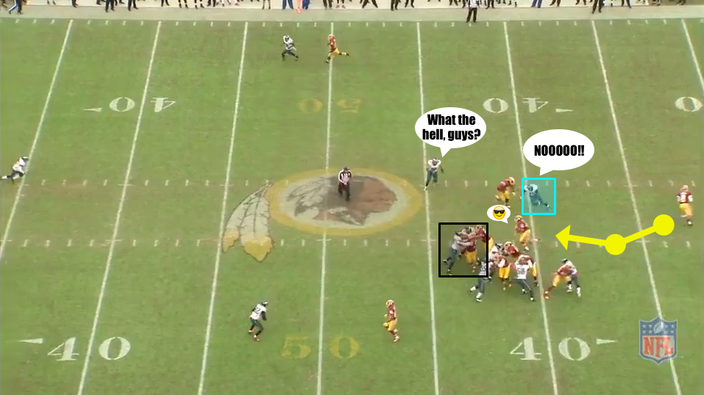 Here's another angle after Morris makes the cut: 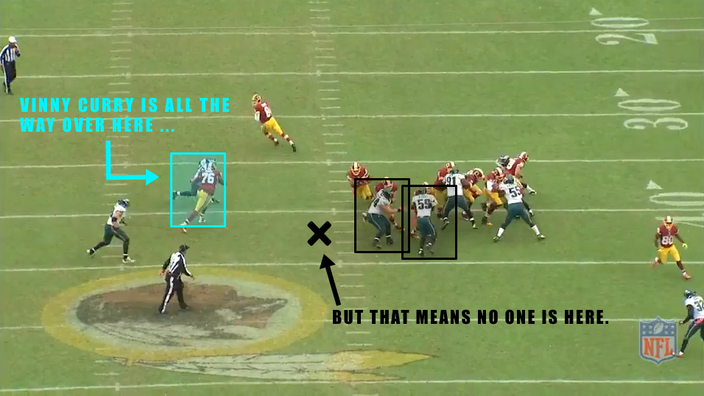 When's the last time you saw an Eagles running back have a lane like this to run through? 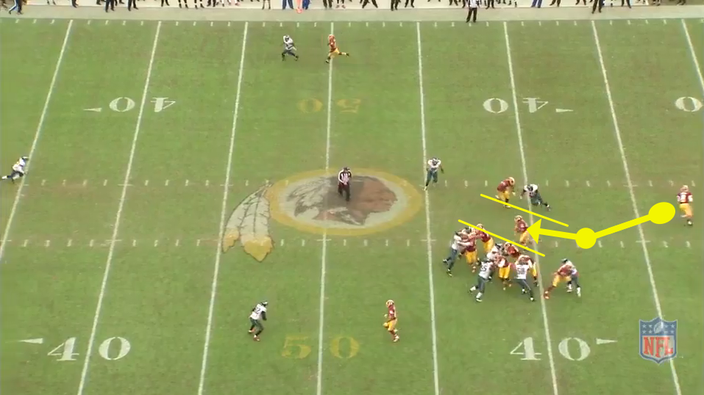 Barwin eventually chased down Morris and made the tackle at the Eagles' 46-yard line.

Davis reiterated later in his meeting with the media on Tuesday that the mental lapse -- or the fact that the Redskins marched 90 yards on 15 plays during that final drive -- had nothing to do with the players being tired. While it wouldn't necessarily be excuse-making to admit that they were tired -- the defense did see 21 more plays and spend twice as much time on the field as the offense -- but it would certainly feed a narrative the Eagles want no part of: that Kelly's uptempo offense, especially when it's struggling, comes at cost of the defense.

“I honestly don’t see it that way, and talking to the players, we are in great shape," Davis said when pressed about the fatigue factor. "There’s nobody talking about being gassed. It’s not an excuse that we’re going to rely on, even though the question isn’t about an excuse. I really believe, guys, that we are in great shape."

And then the defensive coordinator channeled his inner Chip Kelly and said that they'll make those plays next time...

"I’ve said this before, and I just got done saying it to the guys: I hope the next 12 games come down to that same scenario, because we’ll win the next 12," he said. "This group of guys will make those plays. I said it after the game, we didn’t make it this time, and it’s not taking anything away from Washington. They made the plays, they earned the win, and they got it. But going forward, we will make those plays, and I don’t think anyone was gassed."

And then just for good measure, Davis did hint at the fact that the injuries to Cedric Thornton, Byron Maxwell and Mychal Kendricks may have contributed to some players being tired by the end of the game.

“Now, the hard part of the game, if you ask me, is three first-quarter injuries are hard to absorb because you don’t get those bodies back," he said. "And a lot of times, injuries happen at different parts, but we had each position group lose a player in the first quarter. So that, in and of itself, will put strain on the reps and we’re big at rolling.”

But as the Redskins final drive rolled on, Davis said all the credit goes to their offense and it's hard to blame him. Just take a look at the window in which Kirk Cousins fit his game-winning TD pass: 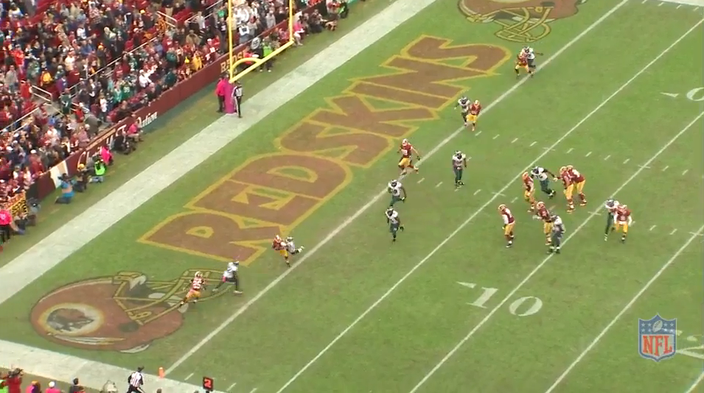 Here's Davis' take on that play:

“Oh, that’s a game of inches and they caught that thing in inches. It was an all-out blitz to their empty; we checked to a blitz, which we like doing down there. We’re either going to max drop or max blitz you. Walt Thurmond was in a perfect position — he played inside out. Eric Rowe did a great job of knowing that he had a running back, and Pierre was inside, so he came off his quick to kind of trap that coverage. Connor Barwin is unblocked off the edge and taking a perfect angle.

"So I — Kirk Cousins made a great throw with a guy breathing down his neck. The ball had to come out, and I’m telling you, it was that close."

How close was it, Bill? 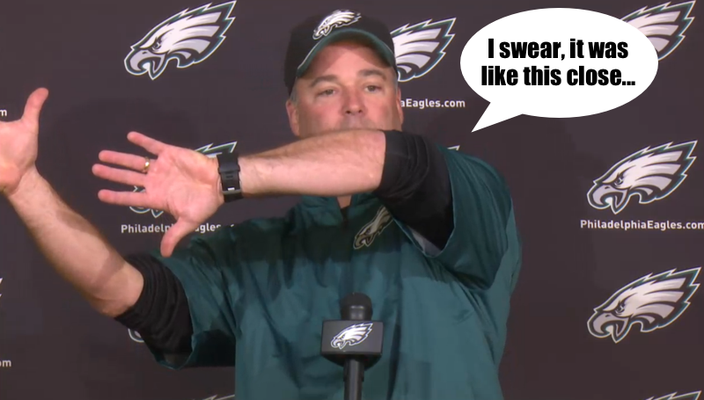 “It was a perfect throw," Davis continued. "If [Cousins] had thrown behind it, Walt has it. If he throws it too far in front, Eric has it. But he throws it right on the money. And then Pierre caught it and held on to it after he hit him. So that’s one of those plays where you just have to say, ‘Congratulations, Washington. On that play, you did exactly what you had to do.’"

There really was nothing the Eagles could have done better defending that play. Take one last look from another angle: 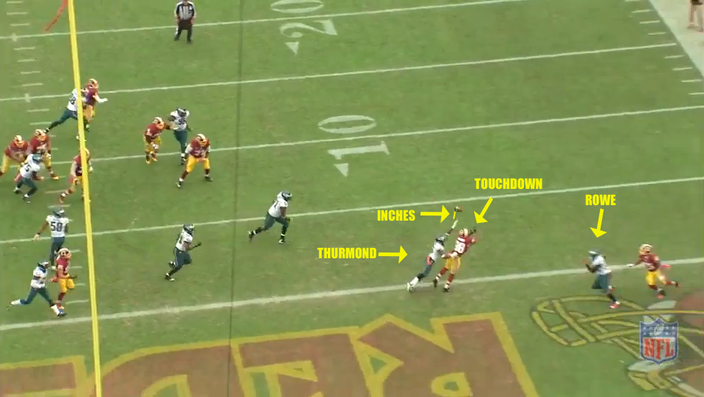 “And it’s a game of inches," Davis added. "We’ve talked about it a lot. We’ve got to get those inches in our favor now.”

They'll need to start piling up those inches on Sunday, as they face a much better QB in Drew Brees and the always-dangerous Saints offense.