Eytan Shander: Carter Hart is Philly sports' MVP right now and it's not even close 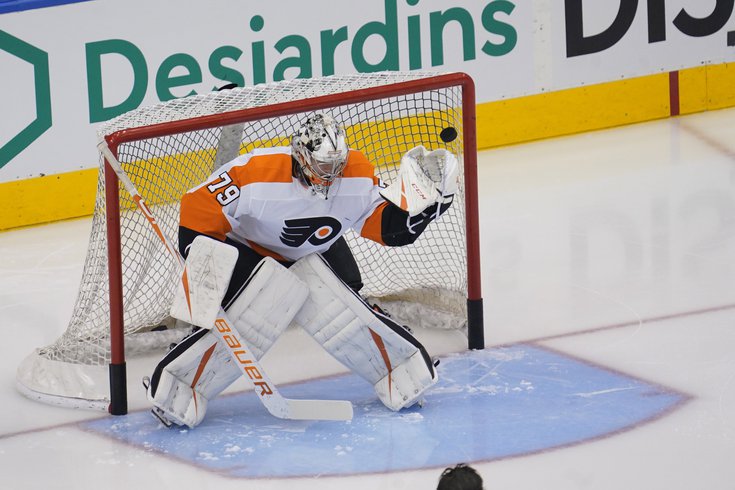 Carter Hart is the most valuable athlete to play a sport in Philadelphia — maybe in the last 15 years.

I’ll spare you the tired and played out question echoing throughout sports radio stations about how upset you will be if they don’t win the Stanley Cup. This is about maximizing the moment and appreciating what we are seeing, like right now — not in ten games or five years.

We are witnessing a young man grow up and arrive at the same time. It’s one of the most difficult things to do in sports. We see it all the time with rookies in the playoffs or some young phenom having an historic rookie season. What we rarely see is a kid stepping between the pipes – in this city no less – and dominating the way we have seen. Two straight shutouts coming after a total butt-whooping. It’s like what we saw when Damian Lillard responded after missing two big FTs. Dame took it personal and responded by going on an absolute tear.

That’s exactly what Hart did after seeing the puck cross the line four times in their loss to Montreal. What happened next was a perfect microcosm of who this young man is and just why he’s the MVP of Philadelphia sports. It’s like he went out there and made it a personal mission to stop every single shot thrown his way. Both performances came in tight games, 1-0 and 2-0, while rising to every occasion, even helping to kill penalties. I can’t get enough of watching his every move in net. It’s fascinating because he’s still so young, and shows no signs that his game will wear down.

Nobody means more to their team’s direct success than Hart to the Flyers. It’s not even close. What’s wild is that a team with some savvy vets are following the lead and momentum from a recently-turned 22-year-old young man. We rarely see anyone that young in sports take over a team. Hart has done that on and off the ice. He’s what everyone is talking about. He’s the best damn goalie in the NHL right now. That is what separates him from anyone else in this city trying to snatch that title. Hart is the best in the league at a position that is the most import to his team's success.

We deal with injuries surrounding some of our best players in this city. Wentz went down the past three seasons, Ben Simmons is an injury away from me demanding they move on, and we all still hold our breath when Embiid hits the deck. Bryce Harper is a beast, as is JT Realmuto. But neither are even close to being so integral that if removed, their team loses. Embiid and Wentz would be the closest to Hart, but the injuries and conditioning prevent Embiid from being a top 5 player. Wentz is criminally underrated by his peers and even fans here, but he’s barely a Top 5 QB, and that’s some homerism behind my opinion.

It’s no shot at anyone else, it’s just a way to highlight how dangerously good this Flyers team will be with Hart in net. Nothing changes so long as he’s between the pipes. The Flyers have a chance to beat anyone anywhere anytime thanks to their netminder. I knew that slogan was catchy for a reason.

A return to normalcy – Philly style

There is zero indication as I write this that the NFL season won’t kick off on time. We’ve seen people all around the league – including our own head coach and star right tackle – contract COVID and return to the team. There seems to be a battle between normalcy and this cloud of the virus still hovering over us. Make no mistake; once the actual season begins there is a major return to normalcy for us in Philadelphia. That comes in the familiar form of expectations.

The Eagles have three goals in my book, all of which are achievable and come with ridiculously high expectations. Win the division. Win the conference. Win the league. That easy, right? Just because it’s been one of the most unique off seasons in the history of sport doesn’t take away the expectations and pressure on this team. They are going out expecting to win games, we should go out and expect them to do the same.

This isn’t a hotseat column, but I can’t sit and watch another year of development of the wide receivers mixed with holding your breath that a veteran can be healthy on the field. There is no excuse for the Eagles not winning the NFC East at least, just look around the division. Two teams are below the line of competing in the Giants and Washington; you have a Dallas squad that’s been full of issues all summer; and the Eagles, who return some key players on both sides of the ball and the best QB in the East.

I am as excited as you are about the team returning to practice. Like you, I try and temper my enthusiasm, but I get giddy when I see video of a camp ball landing in the hands of a young WR. I love keeping up with everyone reporting on camp, knowing they are just doing their jobs while so many fans take it as regular season gold. I also know not to be fooled by the Ol’ Bradford 13-for-13 preseason games — thankfully those are out the window this year. So, all that is left is for a team that underachieved last year – yes, I said it – to get to the playoffs. I think putting higher expectations on this team this year makes all the sense in the world.

Let’s just look at what the team returns during a summer of instability. They have the best coach in the NFL over the past three seasons, and I don’t think it’s close. Nobody – not even the hoodie – got more out of less than Doug Pederson. Making the playoffs and winning a Super Bowl, only to follow up by making the playoffs two straight years. He didn’t even do it with the same quarterback. It’s not talked about enough — Doug P is a monster coach.

His defensive coordinator went from allegedly forming a coup in the building to winning a Super Bowl on defense and adding to his system each year. We all get frustrated with some of the strategies, but Schwartz is one of the league’s best DCs, especially over the past three seasons. As the team continues to identify newer or younger talent on defense, there’s Schwartz continuing to make the most of his units.

The QB is one of the fiercest competitors in the NFL and played through multiple injuries throughout the past three years. He did enough to secure home field in 2017, played through a back injury the next year, and last year had one of the best TD-INT ratios despite throwing to bench players. Carson Wentz is one hell of a quarterback and leader. The data is there, he’s been able to perform at a super high level when healthy.

That’s why the pressure is on, that’s why we demand victories, this is why we talk about winning the division and representing the conference in the Super Bowl. Because it’s all very realistic. This team – including Howie Roseman and his boss Jeff Lurie – set up these expectations. They did it by assembling and then letting those pieces work on their own. The difficulty of playing in this city comes with high expectations regardless of what side of the extreme you are on. Meaning, the Eagles could be projected to go 2-14 or 14-2 and either way someone’s job is on the line if they fail.

I simply can’t sit back idly and watch another year of Wentz being healthy only to be knocked out of the playoffs. If this team is truly going to live up to the expectations they set over the past three years, then winning games comes with the territory. They don’t need to even make it pretty; it’s the NFL and you take a 'W' any way possible. But nobody on this team can hide behind what already happened, as the bouts with COVID haven’t derailed their focus nor their own expectations. Nobody down at the NovaCare is talking about just easing their way back into the season. The conversations down there are about winning the division and going from there. Those should be the same conversations we talk about on the outside.

You have every single right to be upset and frustrated with a team unable to make the postseason this year. The excuses are out the window. The team helped throw them out with what they did the past couple of years. I’m on board.

See you in the playoffs.