Eytan Shander: The only thing we know about this Eagles team is that we don't know anything 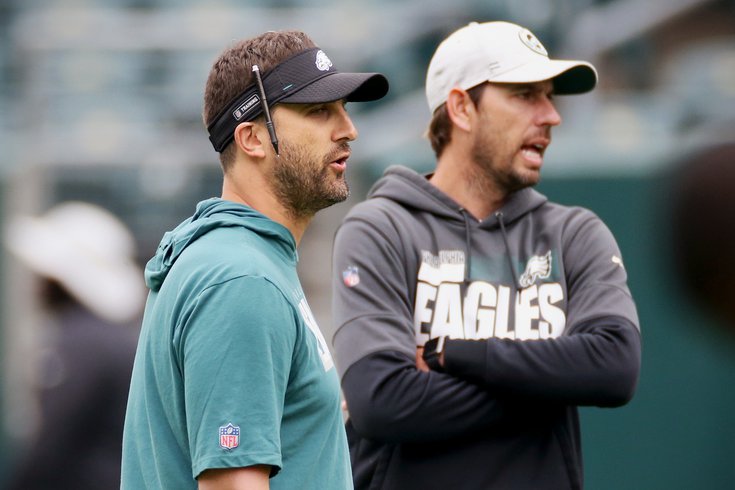 The year is 2024 and Philadelphia is preparing for another return to work for their beloved Eagles team. The squad is coming off their second Super Bowl Championship in the past decade, led by another young head coach and a savvy general manager.

A radio host pontificates the moment where we should have known Nick Sirianni was wise beyond his years, not some bumbling idiot. Twitter is abuzz with old tweets and some self-reporting on when they used to rip this coach for the Rock, Paper, Scissors jokes – similar to what they said about Doug Pederson’s inability to work a headset.

What if that's how this plays out? What if you got it all wrong about the hire? About the QB? About the GM you wanted fired more often than not? What if the owner actually knows how to hire a head coach, not fall ass-backwards into the Lombardi trophy?

For the first time since I can remember, being an Eagles fan for all of my 42 years on this planet, this season is truly an unknown. Nobody has any idea what the hell this team is or can be, including the people involved. It’s why the above isn’t absurd, not because it could happen, but rather there’s no way to prove it can’t.

This isn’t an esoteric philosophical debate on existentialism versus conventional faith, it’s a simple approach to a kind of season that we’ve never seen. It’s like watching a basketball player dominate in 2/3 of the game and be one of the worst in the other area.

It’s an anomaly founded on one basic principle: there is no loyalty at the NovaCare Complex. We have no coaches holding on to bad talent, force feeding a WR down our throats just to make a coach or GM look better. Jimmy Kempski put out realistic scenarios in which the Eagles would trade Fletcher Cox, which again, speaks to how wide open this year truly is.

Sure, Jalen Hurts isn’t competing for his job this year, but Andre Dillard is. Yes, I truly believe Howie Roseman would love to have Dillard pan out and avoid a “bust” tag, but having Jordan Mailata mined out of the 7th round is still a nice bragging chip.

This is truly what you get with so many new faces coaching this team. New on offense, defense and special teams. New behind center and on the other side of the ball. It’s not the newness itself that’s refreshingly exciting heading into this season, rather the fact that nobody is safe from some insulated bubble of politics. If the team would entertain trading away their best (defensive) player, then clearly, they would move anyone. If the reports about interest surrounding Deshaun Watson are true, then clearly, no one is safe.

Guys are not competing for their jobs this year so much as they're competing for them moving forward. Hurts going out and proving he belongs on this team is just a microcosm of what the whole team is this season. The head coach, defensive coordinator and special teams coaches have no allegiance to anyone on this team, something that should make for a true, honest analysis on who can and can’t play.

I know...I know. You've already made up your mind about who can plan and who can't, but hear me out, just this one time. This season is a total unknown because we will never see so many brand-new components working together at the same time. There’s no – thank goodness – Sam Bradford to “ease” in a Chip Kelly. It’s all new.

Maybe Sirianni was right, maybe there really is open competition all around — but instead of it being for this year, it’s about a guy’s overall tenure with the Eagles. And the coaching staff is no exception. Roseman no longer has to issue the bad news about trading away a star player, and if it doesn’t work out, he will just blame it on the new guy(s).

• Chuck Fletcher came in to this offseason wanting to make a change in direction, and boy did he. Three big trades — including the departure of Jakub Voracek – was exactly what this team needed. Fletcher proved he's a GM who won’t hesitate to cut bait with an old(er) regime. He brought back veterans in leadership positions. This is the mentality you want with whoever is running your favorite team. A+

• As we get through the NBA Draft, it will become more evident that Ben Simmons may not get traded before the start of the season. What appeared inevitable – to me as well – seems to be losing some steam. Here’s why. Daryl Morey is finding out that Simmons really isn’t a “two of your better guys and a draft pick or two in return” type of player. He’s more of a “Malcolm Brogdon and a first” kind of guy. The Raptors were the latest to reportedly turn down something huge for Simmons. Brace yourselves, this could get ugly. B-

• FIBA is not to blame. The international rules are not to blame. Not getting to play Iran every time is also not to blame. Team USA has some of the best shooters in the entire world playing together in a setting that fuels open spacing. The rule of having a big stuck down in the paint should open up everything for KD and Team USA, instead they smell like trash. Stop blaming rules that actually help this team. F