Eytan Shander: There are fewer and fewer reasons to move on from Jalen Hurts

The Eagles brass may want a different offense next season. That would be bad... 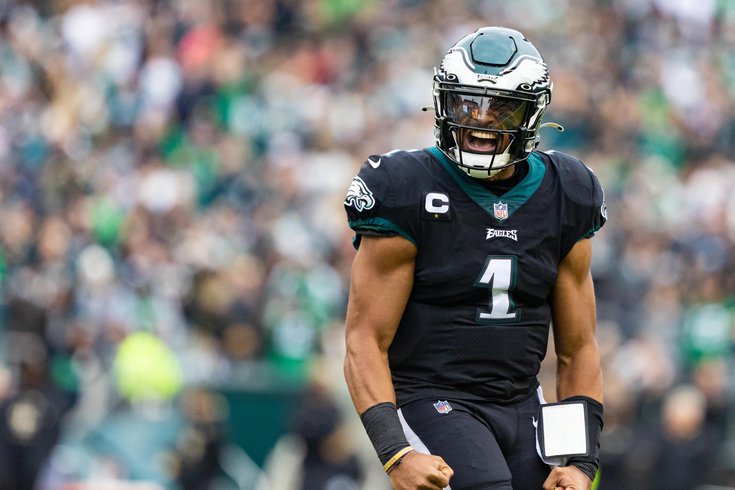 Here we sit ahead of Chrismas and the final three weeks of the NFL season. I’m sure your children have asked - whoever the gift-bringer is in whichever gift-giving holiday you celebrate in December – for an Eagles playoff berth, correct?

I haven’t. Not because I’m some Grinch out here rooting against my team, rather I’d want my wish granted on something else. I also recognize this isn’t the super popular, or a unanimous decision. It’s also become painfully evident that no matter what numbers or stats are thrown out, it doesn’t seem to change the opinion of whichever side is arguing.

Yes, I’ll keep my earlier wish of Jalen Hurts being the QB1 moving forward, for at least the next season, and seeing what this team can do with two years of growth – especially Hurts. But this isn’t another “Hurts should be the guy” column, we did that before. It’s more a matter of why the organization still has this belief that someone else is out there, not named Rodgers, Watson, or Wilson.

It’s also about why a fan would be so immersed in this season, enjoying so much of what we’ve been asking from our teams for years, and think they need to upgrade the QB. They have three picks that suddenly don’t seem like top-10 locks.

So again, what exactly are you looking at in this stretch run that has you asking for Spencer Rattler?

Hurts and the Eagles offense are doing things we haven’t seen in years, dominating on the ground like we haven’t seen, well, ever. The offensive line is rotating each week and it doesn’t even matter. Their run game isn't suffering. It’s thriving. Dallas Goedert has shown he can execute the game plan that highlights him as the top threat, and the team can still thrive.

They aren’t even fully using DeVonta Smith to his potential, which will come. The Eagles have one of the rarest combinations of offensive attacks in the NFL and breaking that up would be foolish – dare I say, counter-productive.

There may not be a better time than now – ahead of an inevitable win over the Giants where Hurts will continue to shine – to put this out. There are fewer and fewer reasons to move on from the current QB.

The team isn’t going to get better from where they are right now by simply adding Aaron Rodgers. If they can even get him. They certainly aren’t Super Bowl-ready by using three picks on Deshaun Watson. The offense works. How could anyone say that it doesn’t? Yet…

We’ve seen a similar sentiment echoed throughout the media – people like our own Jimmy Kempski on the latest edition of Post Flight – that the team may not want this type of offense moving forward. It’s hard to ignore, as far too many people who cover this team continue to bring it up in conversations regarding Hurts future.

It’s also easy to believe that the team’s owner and other decision-maker would still be enamored with someone with a cannon for an arm, and not a Ferrari for feet.

Here is the biggest problem with the team’s mentality; by removing the special talents that Hurts has in this offense, the team is forcing a rebuild. It’s making it exponentially tougher on Nick Sirianni. Even harder on the defense.

We couldn’t have had this conversation a month ago, six weeks or even at the start of the season. We needed to see this with our own eyes play out, no matter if you believed or not. Hurts has taken over as the premiere running QB in the NFL but it’s so much more than that. He’s leading one of the most powerful offenses on the ground the league has seen in a while.

Let’s be honest, if you consider yourself some master team-builder, you shouldn’t need another quarterback.

NFL pick of the week

Here we go again! It was a sweat, but the Jags hit the over last week against Houston and will have an easier time this week. The Jets are the worst defense in the NFL. No, seriously. They are 32nd in scoring defense giving up just over 30 points per-game. The same exact principle as last week – that bad defenses will always give up more than bad offense will struggle – applies this week. The Jaguars are living like they have a new lease on life after they fired their head coach, and the Jets only need to score about 14-17 points as they give up so much each week. Thankfully, the Jags defense will be more than happy to oblige!