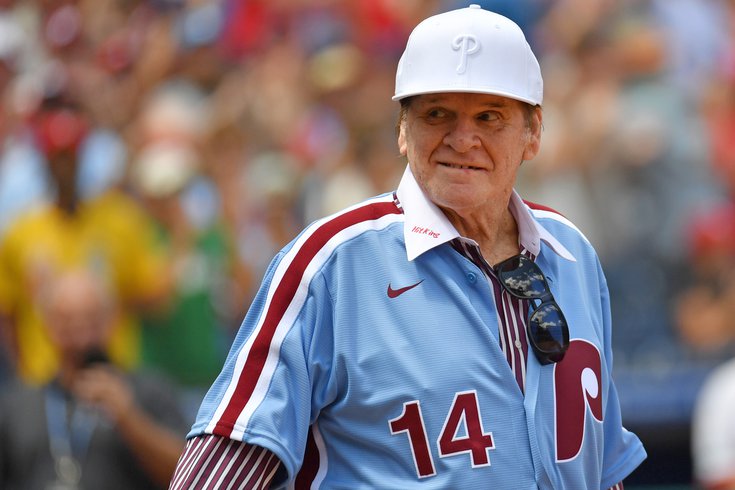 Pete Rose on the field Sunday at Citizens Bank Park for the Phillies' Alumni Weekend.

Pete Rose is a bozo.

That’s pretty much what you get anytime you put a microphone in front of him, bozo behavior. The appearance on the Phillies broadcast that soured last Sunday for a lot of fans was no exception to the “Bozo Rule” of broadcasting.

It’s a very simple rule with only one true pillar of wisdom – The only person to blame for what a bozo does on TV is the person who put the bozo on TV.

Someone said, “Hey, let’s put Pete Rose in the broadcast booth with absolutely zero prep or insight into how our broadcast works.” What’s even more shocking is the rest of the room stood up and said, “Oh, hell yes.”

It’s highly debatable how offensive some of the things said on the actual broadcast by Rose were to fans, “cock-high fastballs” isn’t exactly spewing bigoted ignorance. But nobody can defend his disparaging remark to a reporter in response to a very real situation, the statutory rape accusation from years ago.

If a bozo is going to put another bozo on TV, then all that stuff is on the table. The Phillies parading Rose around for reporters means they get to ask questions about statutory rape and betting on baseball. Anyone who disagrees with someone having the right to ask those questions is an idiot with no actual basis to their stance other than they love Rose.

This got us thinking here about who makes the All-Time Philadelphia Bozo Team – meaning folks who should never appear on a broadcast again. It’s hard to see anyone in this city putting Rose on again, so he’s now off the table. Here is the rest of the squad:

All-time bozo. This guy was so clueless to a lot of things, mainly how to simply interact with other human beings. His awkwardness was second to his hubris. If anything, Chip’s total takeover of the Eagles will be as dark of a mark on the ownership stretch of Jeff Lurie as the Super Bowl was a bright spot. Chip was a nasty individual who didn’t want to establish any connection with anyone in the building, media and even his own team.

He even sounds like a weasel – yes, I am aware that my own voice is terrible for most people – but Chip exudes weasel-ness. He wouldn’t be able to intelligently communicate anything of value about what he’s seeing and would piss off so many people watching that the broadcast might lose ratings.

Get this loser out of here.

This one isn’t the typical bozo activity. There won’t be any offensive nonsense coming from Wentz, nor will there be this absurd sense of self-importance that exudes from Chip.

He’s not a bad guy, does a ton of charity work, and genuinely seems like he doesn’t wake up every day looking to upset the world. But man, when his name pops up in Philadelphia, people lose it. They still blame him for the team coming apart, for Doug Pederson getting fired, and for probably stuff that happened even after he was gone. It’s not all his fault by any means, but the reaction he gets is basically a copy and paste of a bozo.

Sometimes making the All-Bozo team isn’t about you, yourself, being a bozo, but rather the reaction you get from the majority of people. Wentz doesn’t come off as doing anything intentional, but you can already hear him saying something to Mike Quick in the booth and Twitter making it out like Eminem’s empty stare into the camera.

He's just too awkward and upsets too many people to do anything other than just that on any broadcast. Nice guy, but not for us.

The entire broadcast featuring T.O. would be based around him smashing Donovan McNabb into pieces. While this may be entertaining for some, it will die rather quickly. Plus, there are a lot of fans who were either young or just too mature to still care about this stuff.

“Did someone say perfect game?”

That’s all this really is now with Owens. A parody of Homer Simpson rushing the stage to interrupt a Penn & Teller bit, reminding the world of his perfect game. I’m just not sure how much more McNabb bashing we can take.

I also don’t think Owens has much to offer about his time here, mainly because most of it was made public… by him.

“Hurts back to pass… looking... looking…T.O. how many sit-ups was it again?”

If anything, the Eagles would be opening up a door for this man to absolutely destroy them for how things ended, justifiable or not.

T.O. himself is weird, aloof and a lone wolf. Bozo? Not intentional. He’s a sympathetic bozo because it just feels like he’s awkward, but I don’t want to hear anything from him on the broadcast.

I think we can separate two things here, two separate realities that can co-exist without hurting or downplaying one. Donovan McNabb was the best QB in Eagles history. I say that as someone who grew up with everything Randall Cunningham and has worked with the legendary Ron Jaworski. McNabb is tops.

The DUIs are a real an issue and any broadcast having McNabb on to talk about anything else, while ignoring that, is akin to ignoring what's wrong with Rose. Therein lies the problem, twofold.

First, nobody would dive into anything of importance with McNabb and it’s just going to be the blandest analysis full of player speak. His legacy here has been reduced to whether he got some fair shake, or some weird comparison to Wentz and the treatment he received. He also comes off as jealous.

I don’t know if he is or not, nor am I saying that he is. It’s just this weird tone and context of things he’s said in interviews. Which brings us to the second reason why this would fail, there seems to be a disconnect with him and this current team, even with Doug P and Wentz. He probably has multiple justifiable reasons for being upset or holding any grudge, he was booed by 30 drunk toothless fans on draft night and carried that throughout his career.

The only way this works is if he’s on the week after T.O. and can respond to some clips. Otherwise, it’s a hard pass.

Poor guy, he just fell asleep on the air.

The problem is WHO FALLS ASLEEP NEXT TO MARC ZUMOFF??

There have been plenty of times in which a Philadelphia sports team has put us to sleep, mostly it’s us upping the dosage of our vice of choice, hoping to just pass out. But you can’t pass out next to a legend, especially a legendary broadcaster.

I think that was the most egregious part in all of this, it’s not that Snow is a bozo – he’s a good dude but made a costly mistake. The Sixers were awful then, but still had a top broadcaster doing the games. It was more an insult to Zumoff than it was to the fans watching. That’s why the whole defense of Snow being that the team was trash misses the point. Just like Mike Francesa, you can’t fall asleep when people are paying you to talk on TV.

Everyone deserves a second chance, but that won’t come on TV. Tom McGinnis isn’t going to take the chance that Eric Snow is passed out next to him as Embiid throws it down. Much like the McNabb nonsense, nobody would even bring that up on the broadcast, but social media would destroy Snow before he even said a word.

I would actually pay to see this one.

Papelbon was hated, loathed and genuinely despised throughout his short time here. I’ve always said that if he played for a winner in town, we would have a different opinion of him. But that never happened and instead he’s just one of the most hated athletes to ever play here.

I’m not sure what the reasoning would be to have him on any broadcast, but this guy would run the risk of saying the most offensive stuff just to piss off fans. He might just spend the entire time talking over Tom McCarthy, laughing at the fans and front office.

As a great editor once told me about Papelbon, “Man, F**k that guy.”

No, Doug isn’t a bozo. He doesn’t deserve to be in the same company as the rest of these guys, but, he can’t be on any broadcast ever again, so long as the Eagles don’t have a second Super Bowl.

I love Doug Pederson and miss him, despite rooting for the future that is Nick Sirianni and Jalen Hurts. I still feel like a kid who went through a messy divorce and is stuck with the lesser of the parents in Howie Roseman and Jeffrey Lurie. The problem is that Doug Pederson moved to Jacksonville and all the presents in the world couldn’t get me on the move.

In a world full of bozos, Doug Pederson was a bright spot. The problem is it will only make us miss him more, hearing and seeing him on the broadcast. Plus, we want all the dirt as to how he gamed Lurie out of a contract buyout while getting another job.