The 8-year-old girl was killed nearly a year ago by officers who opened fire near a crowd leaving a football game. Last week, the borough released the findings of its investigation, but they were heavily redacted 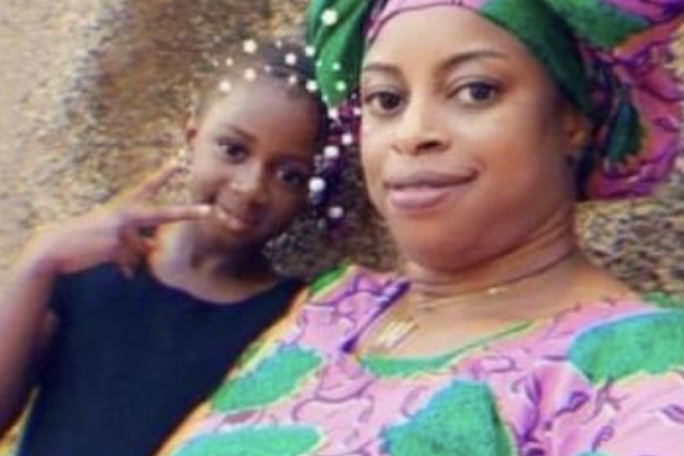 Fanta Bility, 8, was fatally shot by Sharon Hill police on Aug. 27, 2021, after attending a high school football game. The three officers who opened fire face manslaughter and other charges, but the borough has not made public the full findings of its investigation into the police department.

A long-awaited report released last week was heavily redacted, offering little in the way of assurance to a community that's approaching the one-year anniversary of her death.

The protesters marched to disrupt Sharon Hill's first National Night Out, an event meant to enhance relationships between neighbors and law enforcement.

Heading from the borough hall to Academy Park High School, the demonstrators vowed to keep pressing for the release of the full report, which was supposed to provide the public with key findings and recommendations for change in the police department.

We will continue to speak out & show out until the FULL Kelley Hodge report is released, the officers are sentenced to the fullest extent of the law, & council takes accountability for their actions. No justice, no peace! #fantastruth #justiceforfantability #accountability (3/) pic.twitter.com/8NqUO4uA9h

Group of protestors marching to Academy Park High School where Sharon Hill PD is hosting National Night Out. Protestors upset this is where the community event is being hosted… it’s where Fanta Bility, 8, was fatally shot last summer. The bullet, fired by police. @KYWNewsradio pic.twitter.com/QqKdfDcBnt

Bility was killed on Aug. 27 after attending an Academy Park High School football game with her family. Three Sharon Hill police officers, responding to gunshots heard near the stadium, opened fire on a vehicle as it passed a crowd of people exiting Knight Park.

Bility and three others were struck by bullets the officers fired in the direction of the car, which police mistakenly believed had been connected to the initial gunfire. Bility was shot in the back and died in her mother's arms at the scene.

The shots that initially were fired near the stadium, injuring a fifth victim, stemmed from a dispute between two teenagers who had attended the football game. Both teens initially were charged with murder in Bility's death, along with other crimes, but Delaware County District Attorney Jack Stollsteimer withdrew the murder charges in January after a grand jury concluded its investigation into the police officers' use of force.

The three Sharon Hill police officers — Devon Smith, 34; Sean Dolan, 25; and Brian Devaney, 41 – have since been fired and charged with manslaughter and reckless endangerment. The Bility family, represented by prominent attorney Bruce Castor, also filed a federal lawsuit against the borough, the three officers and the chief of police.

The investigative report released last week had been spearheaded by former Philadelphia District Attorney Kelley Hodge, who was hired by Sharon Hill Borough Council to conduct an administrative probe of the police department's use of force policies and procedures. Community members were promised that the report — which they were told was completed in June — would be released by the end of July.

But when the 55-page document was shared Friday, it revealed virtually no new information, conclusions or insight into how the borough intends to reform its police department. Earlier last week, attorneys for the three officers also made a motion to have the manslaughter charges in the criminal case dropped.

On Tuesday, Bility's family was joined in Sharon Hill by representatives from the Darby Area NAACP, social justice organization UDTJ and Delco Resists to speak out about the borough's redacted report.

"I just want truth from Sharon Hill and justice for my daughter," said the girl's mother, Tenneh Kromah.

At a hearing Tuesday afternoon, Sharon Hill Borough Council President Tanya Allen explained that the report was redacted because of the pending criminal and civil litigation.

"In releasing the report, council could not abandon its respect for the judicial process," Allen said. "As such, in the interest of justice and respect for the active litigations related to this tragic event, council chose to redact Ms. Hodge's conclusions and recommendations. Council chose this course of action as opposed to withholding the report from the public until the conclusion of the pending litigations, which could have denied the public access to the report for years."

Sheila Carter, president of the Darby Area NAACP, said the report's recommendations on police training requirements and policies for use of force should be made public.

Sheila A. Carter, president of the Darby Area @NAACP stands with the #FantaBility family in calling for Sharon Hill Borough to release the full Hodge report looking at police procedures & policies. pic.twitter.com/9gD7GYiJab

"If you don't want to share with us the findings of this report that probably cost us thousands and thousands of dollars, then tell us what the procedure was before the report was done," Carter told KYW. "You spent taxpayer dollars as a resident of Sharon Hill, $400 an hour, for a person to come in here to give us a report with no information."

"We understand the frustration the redacted report has raised," Allen said. "Based on the statements made it appears the family, has not been informed by their counsel of the questions the report does answer in addition to the remedies available through the judicial process. We continue to extend our sincere condolences to the family. No family should feel this type of pain."

Demonstrators at the National Night Out event shouted, "Say her name! Fanta Bility!"

Castor, who called the redacted a report "an insult to the memory of Fanta," said last week that the family's legal team will have more to share after reviewing the document.