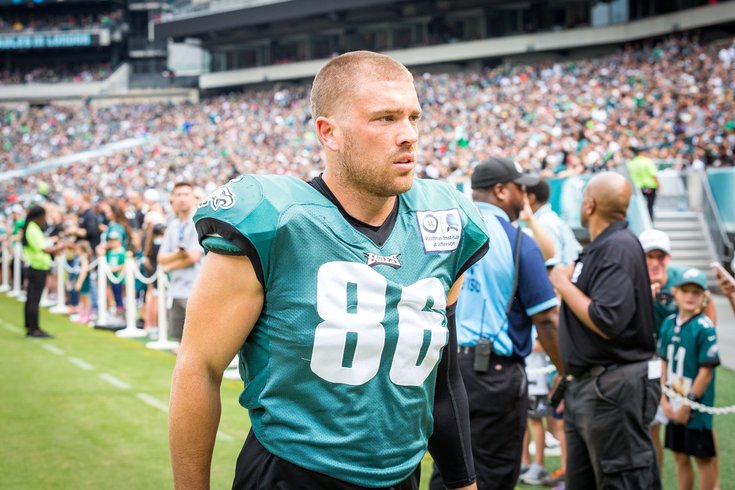 Zach Ertz at the Eagles public practice on August 11 at Lincoln Financial Field.

Okay, let's be honest — there are really two reasons to be interested in the NFL trade deadline, which passes at 4 p.m. Tuesday.

One is to find out if your team will be a buyer (like the Texans) or a seller (like the Lions). The other is to try and take advantage of the fantasy shake up.

We've already had some huge deals for fantasy football purposes: Carlos Hyde to the Jaguars, Josh Gordon to the Patriots, Amari Cooper to the Cowboys. There were three more Tuesday, as the Broncos sent wideout Demaryius Thomas to Houston, Detroit sent WR Golden Tate III to Philadelphia and the Packers sent Ty Montgomery to the Ravens.

Here's a look at how these deals will effect your fantasy leagues.

Golden Tate to the Eagles

Tate could be exactly what the doctor ordered for the Eagles offense, stuck in neutral through eight games at 4-4.

Tate gives the Eagles a tremendous third-down weapon. Is tied for 6th in NFL in 3rd down catches with 15. Last four seasons with Lions, he's averaged 27.2 third-down receptions per season. Will be big help to Wentz.

The consensus seems to be the the wideout, who has four-straight 90-catch seasons, should be a tough guy to cover alongside Alshon Jeffery and Nelson Agholor. However being an upper echelon WR already, there's no doubt Tate will still get a start every week in most leagues.

Wentz has already been spectacular this season, but for what it's worth, he is excited about the acquisition.

Let’s roll my man! Excited to compete with ya! #flyeaglesfly @ShowtimeTate https://t.co/Cy1pARU7HZ

With more weapons in toe — and soon to be healthy Mike Wallace and Mack Hollins nearing a probable return — Wentz could become one of the top fantasy quarterbacks in the season's second half.

This trio of Eagles may see their targets and production go down a but, as Tate can be both a downfield threat and high-volume possession receiver. Jeffery burst onto the scene after recovering from a shoulder while Ertz has been on a record-setting pace. Tate could slow down both just a little bit.

For those of you hoping the Golden Tate trade will "open it up for Ertz!!!" bad news for ya. These guys operate in the exact same area of the field. 70% of Tate's targets and 75% of Ertz's targets are between the numbers per #NextGenStats

The loss of Tate by the Lions can mean only good things for Golladay, who is breaking out this season, and Jones, who had 117 yards on seven catches and two scores last week. It goes without saying that both become start-able WR every week now. We won't bother wasting your time on Lions QB Matthew Stafford. He'll be pretty much the same.

Demaryius Thomas to the Texans

It seems to be the plan that Thomas will step in and take over the role of WR2 for the injured Will Fuller V. With his production diminishing each year, the 30-year-old receiver has caught 36 passes for 402 yards and three scores this season. A winning environment in Houston should be a nice refresher for Thomas.

This is obviously really good news for the Texans young QB. With a pair of really potent weapons, there will surely be a spike in his passing stats as the season continues.

This could be the player receiving the biggest positive impact of the day. Sutton is by all reports a stud receiver in the making and things have finally opened up for him to shine.

With Demaryius Thomas now in Houston, 2018 second round pick Courtland Sutton will be the next man up in Denver. The 6-4, 216-pound wideout is averaging 19.1 yards/catch and now likely will start opposite of Emmanuel Sanders. https://t.co/9JcswexsZG

Sanders will also stand to benefit from the move, pairing him with Sutton in a Broncos offense that isn't as bad as people might think — especially with young running backs Royce Freeman and Phillip Lindsay breaking through.

Ty Montgomery to the Ravens

Montgomery stands to benefit from a change of scenery. He's been more or less fantasy irrelevant, rushing just 26 times for 105 yards (while catching 15 passes for 170). It will be a wait-and-see before determining how he will figure into the Ravens backfield by committee.

I like the #Ravens acquisition of Ty Montgomery. He gives them a versatile move piece within their offense. Still more receiver than RB IMO, with explosiveness. Upgrades their offense from a 'threat' perspective.

This duo has combined for just over 500 yards on just over 100 carries. They'll continue to split touches but will get a small boost in usage with Montgomery out of the picture.

Montgomery could take a few reps away from Collins — particularly on passing downs — but Collins will remain the leading rusher for Baltimore looking to add to his five touchdown runs.

The Montgomery trade is the worst for Allen, who will likely become a non-factor after scoring three touchdowns in 100 carries thus far. He'll fall to third on the depth chart.