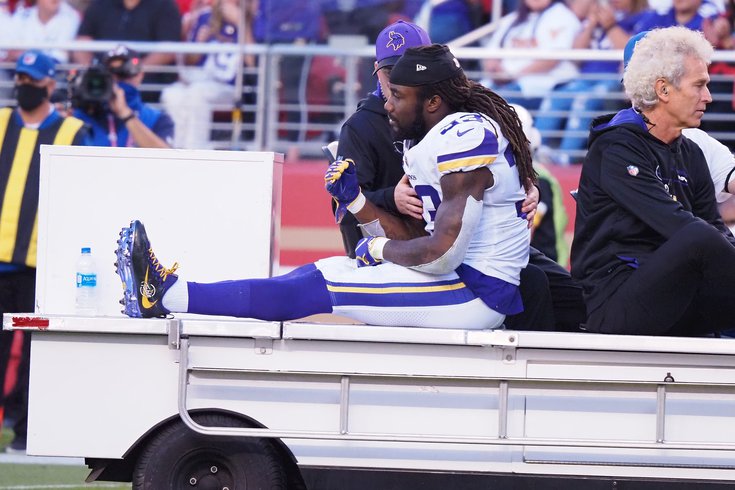 With four teams with byes in Week 13 (Panthers, Browns, Titans and Packers), things could get tricky for people who are fighting for playoff positioning down the stretch, with most leagues finishing their regular seasons after Week 14.

Here's a quick run down of the biggest and most impactful fantasy football injuries early this week to try and help you get ready to make some tough decisions ahead of next weekend:

It's almost as if playing running back in the NFL is dangerous. For the second time this season, the Panthers star RB left a game with an injury and didn't return. The news wasn't great when it came Monday afternoon:

Panthers announce that an MRI Monday morning revealed an injury severe enough to place RB Christian McCaffrey back on injured reserve and he will miss the remainder of the season.

Chubba Hubbard will once again assume starting duties for the Panthers, who have a bye week in Week 13.

You can say a lot about the Minnesota star running back, who has had an eventful season to say the least, but you can't say he isn't tough. Cook was carted off the field Sunday with what was later called a torn labrum. One of the reasons it was so painful is that the RB reportedly had already torn his other one and was trying to play through it. A final diagnosis will come Monday but all signs are pointing toward the star tailback missing some games and Alexander Mattison taking over as RB1 for a bit.

Way back on Thursday, Swift let down a great many fantasy teams when he got hurt early in his team's Thanksgiving Day loss to the Bears. The ailment has been called a shoulder strain and should be followed closely during the week. Detroit has a handful of options at RB behind him including Jamaal Williams.

Another starting running back was forced out of a game Sunday, but Sanders' injury was probably minor. The running back didn't see a snap in the fourth quarter but was standing on the sidelines. He'll probably carry an injury designation into next week and his status is worth monitoring.

Samuel has become a fantasy juggernaut in recent weeks, as he's gotten snaps at running back and has been the Niners' best performing skill player. He was knocked out of the team's Week 12 game with a groin injury and will undergo tests to see if it's something that will hamper his ability to play longterm. Pay close attention to how much or whether he practices.

Sermon has had a rocky rookie year and it continued Sunday when he left in the second half with an ankle injury against Minnesota. Reports should shine light on whether he'll miss time as the week begins.

Another Turkey Day injury, Waller reportedly avoided disaster with a knee injury that appears to be relatively minor and could have him back on the field as soon as Week 13 — though there is a chance he does miss a couple games.

#Raiders Pro Bowl TE Darren Waller suffered just a strained IT band in his knee, sources told me and @TomPelissero said after his MRI. Some very good news.

Just as Freiermuth is coming on as a must-start tight end who is looking like a touchdown machine, the rookie gets a concussion. Like all head injuries, he'll be in the NFL's concussion protocol and the severity of his symptoms will determine whether he'll have to miss any playing time.

Bridgewater hurt his leg against the Chargers and was forced out of the game, handing quarterbacking duties over to Drew Lock. Depending on Bridgewater's diagnosis, Lock could be the guy next week or in games to come. This will be relevant in deep leagues.

The shorthanded Jets played without one of their top weapons Sunday as Davis was a last-minute scratch due to a groin injury. His health status is one to watch as their game against the Eagles approaches.

Cobb pulled his groin and did not return Sunday afternoon. The Packers are off in Week 13 so he'll have time to rest and heal the injury.