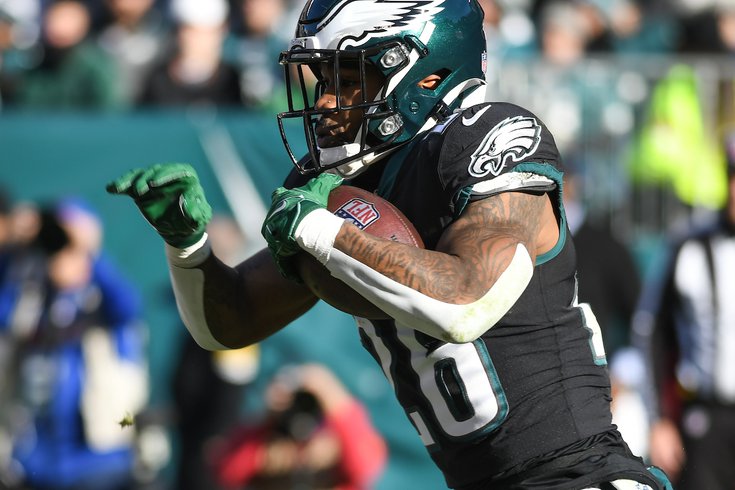 PHILADELPHIA - DECEMBER 26: Miles Sanders #26 of the Philadelphia Eagles runs the ball during the game against the New York Giants at Lincoln Financial Field on December 26, 2021 in Philadelphia, Pennsylvania.

Welcome to our first sit/start advice column for the 2022 fantasy football season. As we have for many years now, we're going to dive right into one player at each position we think should start (if you have him on your roster) and one you think you should keep on the bench.

We're going to avoid obvious ones. Yes, start Jonathan Taylor. And of course, Tyreek Hill should be in your lineup this week, Duh. Instead, we're going to look at a fringe starter you may have questions about.

Here's who to start and sit in Week 1:

You see it right there in the sub-headline — he's playing the Bears. Why not dive in with both feet and start Lance in Week 1 against a team expected to be in the mix for the worst record in the NFL? Lance is, for many, a week-to-week play alongside some kind of sturdy pocket quarterback. But the time is now to be bold, early in the season while he is totally healthy. Lance averaged 60 yards on 12 rushes per game in his starts last year. Cash in on his rushing prowess early.

Stafford has been practicing in full and reports from camp were encouraging, but Stafford missed time with some kind of elbow ailment and with the defending champs opening up the season against one of the best defenses in football in Buffalo, perhaps it's smarter to go with another option here and see what Stafford looks like before committing to him against top opponents.

Last year, the Eagles exploded for 236 rushing yards against Detroit, and the Lions defense isn't that much better for 2022. With some new offensive weapons to throw to, the Lions will surely be looking to handle the pass game and there could be an opening for Jalen Hurts and the Eagles to replicate their 44-6 win last season. Sanders is the best running back on Philly's roster and appears healthy after a hamstring issue in training camp.

They are playing the Jets, and in theory, you'd definitely want to start some part of the Ravens high powered run game in this one, but returning from a torn ACL, Dobbins should be someone you're a bit hesitant to start until after he shows he's got his feel for the game back.

The Niners have one of the better defenses, at least by preseason standards, in football, but the Bears have to throw it to someone. With other options including Byron Pringle, Equimaneous St. Brown and Dante Pettis — you can make a pretty safe bet that Mooney will get his share of targets.

You may be excited to fire up London in your dynasty league this week, but the first-round wideout had an injury in a preseason game and how he'll perform in his first regular season game as a pro is anyone's guess. If you have another option on your bench who is close in projected point output, go a different way just for this week.

He got a lot of targets when Noah Fant was hurt last season and he's the top tight end target now for a much better quarterback in Russell Wilson. Don't be surprised if Okwuegbunam plays his way into a no-brainer, every week tight end starter.

It's a little early to be streaming tight ends, and very few drafters take more than one so if you only have Freiermuth, he's not the worst play in the world. But, he will playing with a new quarterback against a pretty solid defense, and there are a bunch of better matchups to utilize someone who was less touchdown dependent in 2021.