Also, which Packers and Giants receivers will be playing in Week 1? 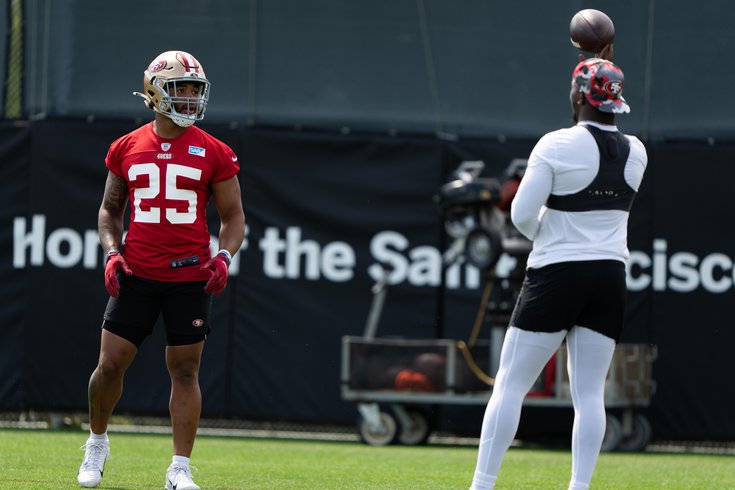 Will Deebo Samuel or Eli Mitchell be ready to play in Week 1?

Draft season is over and it's time to start actually fantasy footballing.

You might still see a bunch of injury logos next to players you drafted. With the season set to kick off Thursday, and then in earnest Sunday, are you going to have to go with your "Plan B" right away in Week 1? Which players are looking like they'll be good to go to start the season, and which might not?

Here's a roundup of the latest from the most noteworthy fantasy relevant players:

Samuel has a knee contusion and hasn't practiced yet this week, but 49ers officials are adamant he'll be good to go in Week 1. Will be be 100%? It probably doesn't matter. Samuel has a lot of fantasy value and should be started if he is healthy enough to suit up.

After missing a bunch of practice, Waddle returned to the field Monday and looks like he's at full speed, ready to play in Week 1.

After tearing his ACL last season, Godwin finally practiced without a knee brace this week but seems timid about committing to playing in Week 1. It seems possible the Bucs are cautious with their star wideout, and he may miss a week or so as he ramps up for the season. Have someone ready to play in his stead as he truly is going toe a game time decision in Tampa.

Higgins is practicing in full after offseason shoulder surgery and the Bengals are pretty adamant he'll be on the field when the season starts this weekend.

Robinson will be playing in Week 1 after tearing his Achilles last winter. He's taken first team reps in practice and will be active one the 46-man roster Sunday. Whether he will get enough touches or produce enough in his first game back to be worth a start is up to each fantasy owner, but he will be playing.

Who on earth will be catching passes from Aaron Rodgers this week? Lazard, who is expected to be the WR1, has not practiced for over a week with an undisclosed injury that will have to be disclosed later this week. Will he be on the field in Week 1? Watson is a rookie coming off knee surgery who is working toward Week 1, but his status is in doubt. Sammy Watkins, Randall Cobb and Romeo Doubs might be the only healthy wideouts depending on how things go in practice this week.

Sanders is back at practice after a hamstring injury cost him considerable practice time in training camp. There seems to be no reason to expect he won't play in Week 1.

Mitchell's hamstring injury seems to be in the past as the second year RB appears in line to start for San Francisco in Week 1.

Waller intends to play in Week 1 after a hamstring (and contract dispute) held him out of training camp.

Ertz is carrying a "day-to-day" injury designation with him to Week 1 as he's nursed a calf injury all preseason. If he's the only tight end on your roster, it might be worth having a back up plan. He truly will be 50/50 this week.

UPDATE [4:35 p.m.]: Jefferson will not be active for the Rams' season opening game.

Jefferson is the only Ram with an injury right now (if you don't include whatever is going on with Matthew Stafford's elbow) and he has not practiced this week ahead of their Thursday night bout with the Bills. He's a stay-away this week with a lingering knee injury.

Moore — who stands to benefit from DeAndre Hopkins' six-game suspension — has missed practice time with an undisclosed injury. His status for Week 1 is up in the air and is someone to avoid early.

According to team officials, Gage is set to make his team debut after overcoming a hamstring issue. He should get some targets in Week 1 if Godwin misses out behind Mike Evans and Julio Jones on the depth chart.

If you are fresh off your draft and hoping to start one of these Giants receivers, good luck to ya (or, you are in a super duper deep league). Both of these guys had injuries in the preseason but are each expected to play in Week 1 vs. the Titans.