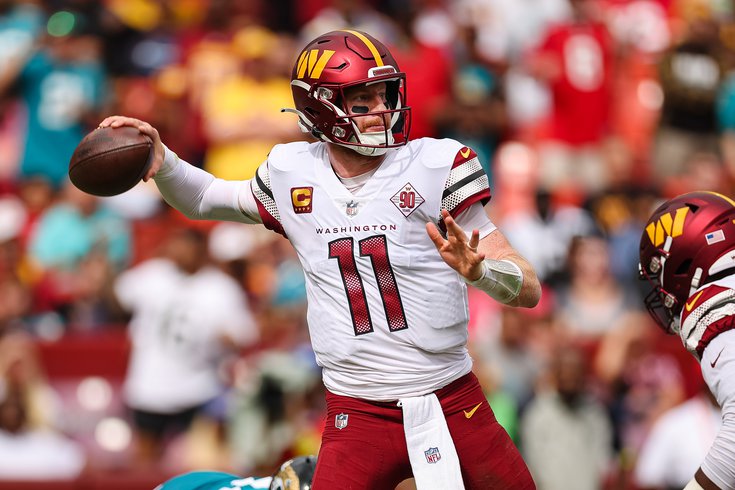 Carson Wentz is actually a very smart add in fantasy this week.

It seems like the cruelty of fantasy football struck early for some fantasy owners, with a bevy of important players either underperforming (like Aaron Rodgers) or getting hurt (like Dak Prescott).

With the first waiver wire opportunity of the year now upon us, there should be a lot of jockeying for players early in the 2022 fantasy campaign. Whether or not you want to jump ship on Rodgers so soon, or if you feel like you need to pick up an alternative to Dawson Knox, those are decisions that fantasy managers must make for themselves.

What we can do is give you some options to keep an eye on as targets for your FAAB. Here's a player (or three) to consider picking up at each position this week:

I know, I can't believe I am typing it myself. Wentz might not be a longterm answer, but he had a spectacular Washington debut throwing four touchdown passes, and the good times should continue for one more week at least, as the Commanders face the Lions in Week 2. The Lions defense didn't do all that much to slow down the Eagles in their opener, and there's a decent chance Wentz has some impressive numbers in his ledger for a second straight week. If you're stuck in QB streaming land right now, Wentz is the lever to pull.

Waiver wire running backs are always hit or miss, and this early in the season there aren't many eye-popping options. With Najee Harris already banged up and possibly out in Week 2, it makes sense to nab his backup in Warren, the only other Steelers running back to register a touch in Week 1. Warren might be worthy of holding a bench spot (for now at least) as it seems like Harris and his high usage rate are always at risk of missing time.

It's easy to be impressed by touchdowns in Week 1 and have them influence your waiver choices in Week 2. Hilliard (who we mention briefly above) had two touchdowns last week. So did Devin Duvernay, who will surely be snatched by someone after he scored twice for the Ravens. But Duvernay had just four targets, and Hilliard had just five total touches at running back. The better indicator of future performance is a high target player, which is why we like Corey Davis coming off nine targets in New York's opener. He's available in 94 percent of Yahoo leagues and is clearly a favorite target of current Jets signal caller Joe Flacco.

Just like we said above for wideouts, it's hard to expect O.J. Howard to have two catches and two touchdown passes in a second straight week. Instead, look for a free agent tight end pick up like Cincy's Hurst, who failed to find the end zone but saw eight targets in Week 1. With Tee Higgins potentially out for the Bengals Week 2 match up against Dallas, Hurst could see another potent target share. He's the kind of guy to add at this stage in the season.

Our Shamus Clancy broke down three defenses to consider streaming every week in fantasy before the season started, and he suggested for Week 2 grabbing the Browns vs. the Jets, the Commanders vs. the Lions and the Panthers vs. the Giants. You can read what he suggests for future weeks right here.

We'll add one more defense to your radar for Week 2 — the Packers against a Bears team that didn't really impress on offense despite an upset win to open the season.