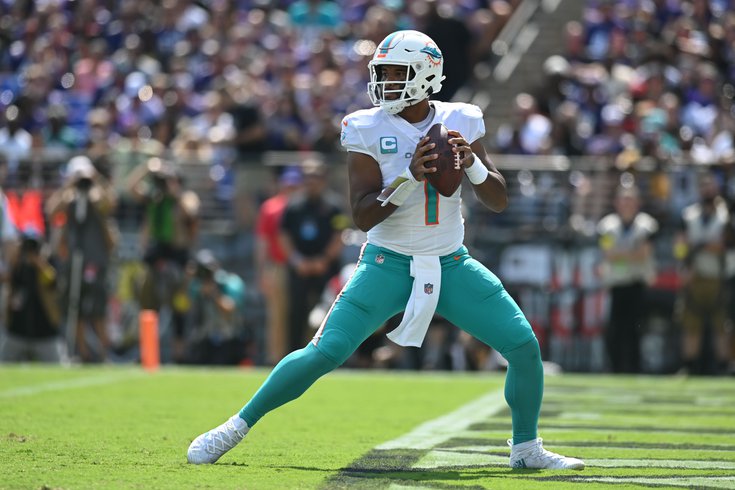 Nothing resonates more in the fantasy community than a manager seeing a player go down with a big injury early in the season or having one of your "breakout" guys look like a dud through two weeks.

With the second waiver wire opportunity of the year now upon us, there should be a lot of jockeying for players right now in the 2022 fantasy campaign.

What we can do is give you some options to keep an eye on as targets for your FAAB. Here's a player (or three) to consider picking up at each position this week:

Yes, last week's six-touchdown performance isn't going to be replicated on a weekly basis. Tagovailoa, however, has made strides as an NFL passer and is the beneficiary of an amazing setup. New coach Mike McDaniel, a former Kyle Shanahan disciple, is working his wonders in South Beach. Tyreek Hill and Jaylen Waddle might be the best wide receiver duo in the league. Chase Edmonds has had 96 catches out of the backfield over the last two years. A Week 3 matchup with the Bills is a tough draw, but snagging Tagovailoa now could make a difference down the road in a playoff chase.

Clyde Edwards-Helaire managers seem perpetually disappointed. As a first-round pick in the 2020 NFL Draft, it was assumed that Edwards-Helaire would be a fantasy monster the next few years. It just hasn't been the case. In Week 2, backup RB Jerick McKinnon actually out-snapped Edwards-Helaire 27-25 (via pro-football-reference). His production may be touchdown-dependent, but wading the rough waters of early fantasy waivers, managers could do a lot worse than the RB2 on a top-two offense in the sport. McKinnon is rostered in just 13.6 percent of ESPN leagues.

Devin Duvernary is rostered in only 15.9 percent of ESPN leagues and is 15th in fantasy points for wideouts two weeks into this season. I'm putting a waiver claim in on him as I type this! Dunvernay has upside as a return man, as he was a First-Team All-Pro punt returner in 2021 and took one back to the house in Week 2. As Duvernay develops in his third year in the league, he could become a big-play target for Lamar Jackson, who looks increasingly like he's getting back to his 2019 MVP form.

Logan Thomas is ESPN's TE9 right now while still available in 80.5 percent of leagues. Facing the Eagles at home, perhaps Thomas could find himself in some advantageous situations if Jonathan Gannon's defense resembles the unit that played in Detroit in Week 1 rather than the one who stymied the Vikings on Monday Night Football. Thomas managers are hoping he gets some reps with Haason Reddick dropping back in coverage!

When it comes to streaming defense, it's more so about who the D is playing rather than the defense itself. Houston will face a Bears squad that has Justin Fields at quarterback. Fields has completed just 15 passes through the first two weeks of the season. Yikes. I'm sure the Texans are going to be available in almost every league, but they could be a hot free-agent pickup this week because of their favorable opponent.