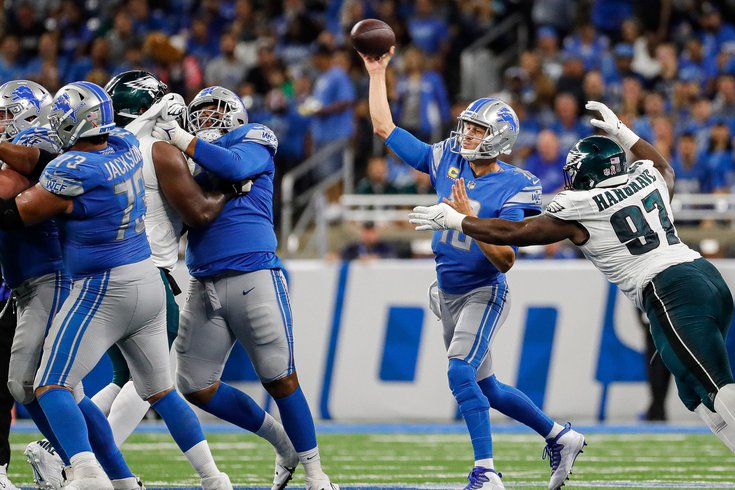 The Eagles gave up 35 points to Jared Goff and the Lions.

With Week 4 approaching in fantasy football, it's looking like there are going to be a lot of big name players whose statuses will be unknown heading into the upcoming slate of games.

Some guys will practice and give you peace of mind mid-week, while others may be game time decisions. If you have a star player like Dalvin Cook or Stefon Diggs or any of the other wounded fantasy stars on your roster, you might have to take preventive measures by picking up a second option on the waiver wire.

We've collected a player (or three) at each position we believe is worth targeting on waivers this week. The players we include below are available in at least 50 percent of leagues across all major fantasy platforms.

Goff went from being left on the cutting room floor during drafts to being a surprisingly reliable quarterback in the early going. Thanks in large part to top 3 fantasy receiver Amon-Ra St. Brown, Goff has been consistent through three starts, with seven total touchdowns, two interceptions and at least 34 pass attempts per game. Against Seattle in Week 4, he's a good pick up for anyone desperate for QB help.

This is a must pick up handcuff move for those with Joe Mixon on the roster, as the Bengals' star RB has not only struggled but was banged up in Week 3 and will either be less than 100 percent next week, or might miss the game entirely. Perine had nine carries last week with two catches and was very efficient with his touches, averaging more than five yards per. Non-Mixon managers could go for Perine too if they have an opening at running back.

Gallup is nearing his return and unless you are a true Noah Brown believer, the Dallas offense will be much improved when he returns to the field. While there is no guarantee he'll be suiting up in Week 4, the Cowboys did elect not to put him on the PUP list (which would keep a player out for at least four weeks), so it might be a smart move to get ahead of the curve here, even if you plan to stash Gallup on your bench for a bit.

Conklin is rostered on just over 20 percent of Yahoo leagues but that should be changing soon. With a position as difficult as tight end is for fantasy managers, Conklin's body of work so far is as reliable as it gets. The New York tight end has combined for 24 targets and 18 catches through three games and has 140 yards and a TD to show for it. Consistent targets are very hard to come by, so take a chance on Conklin this week (and perhaps going forward).

The Packers defense has allowed just 10 and 12 points, respectively, over its last two games, with six total sacks and three turnovers forced. With the Patriots potentially turning to Brian Hoyer at quarterback, you have to think Green Bay's defense can keep up its stellar play.