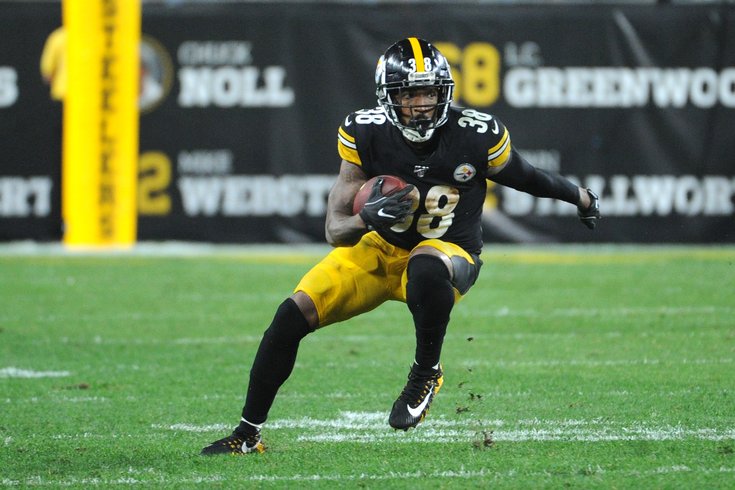 Jaylen Samuels looks ready to return to action this week.

The Saints, Falcons, Rams and Bengals all have bye weeks in Week 9. The list of injured players with fantasy importance continues to grow. This week, it's understandable if you need some help fielding a startable fantasy football roster.

Surprisingly, there were almost no trades with fantasy impact prior to Tuesday's trade deadline. In fact, there wasn't much of anything impactful this week as the NFL trade deadline reverted back to it's somber, virtually meaningless status of years prior.

So a day late, but with no less useful information, here's a look at a player (or two) at each position to pick up in free agency or the waiver wire in your fantasy league for Week 9:

Carr has been a lower-tier quarterback for a while, but he's starting to post pretty impressive numbers. He threw for 285 yards and three touchdowns last week and at home against the Lions this week could move the ball effectively once again. He's a good pick up for those still riding out Pat Mahomes or in need of a streaming option.

The entire Steelers offensive backfield is working back from injuries, but according to head coach Mike Tomlin, Samuels appears to be the back closest to being able to play next week. If James Conner is indeed unable to suit up in Week 9, (or even if he does), a healthy Samuels is a fantasy contributor to spend some free agent cash on if you have it.

The Jags have a slew of injuries at wideout, with Dede Westbrook and Marquise Lee looking like they'll miss action next week. D.J. Chark is the No. 1, but Conley looks like he'll assume the No. 2 role for Gardner Minshew. In his last two games, Conley caught seven catches for 186 yards and a touchdown on 14 targets. He's certainly worth aggressively pursuing.

Deshaun Watson seems to have found a new favorite target, with the veteran tight end posting at least 12 points in three of his last four games. With Will Fuller V out, Fells will continue to hold weekly starting value at the TE spot, where he's averaging around six targets per game over his last few contests.

The Eagles have found their rhythm of late defensively, and will be facing a Chicago offense led by the mediocre Mitch Trubisky. Philly averages 3.7 sacks per game at home — while 10 of their 11 sacks at home came in one game, they averaged 2.7 per outing over their three most recent games — and will have the healthiest secondary they've had all season. They are worth a stream this week.