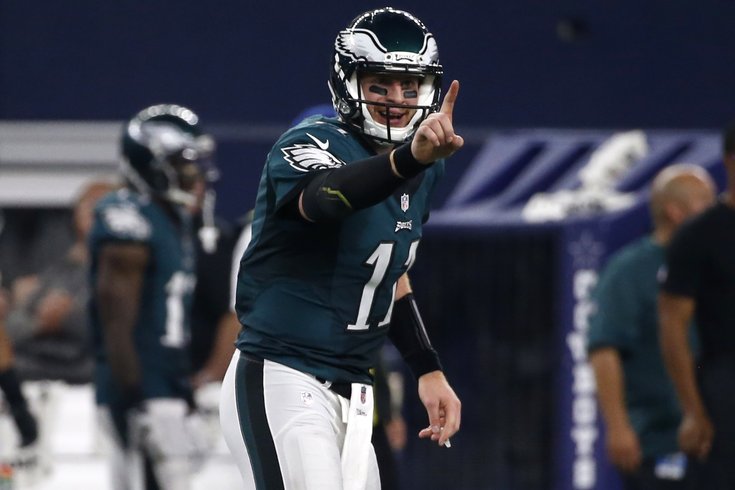 I like to think that Carson Wentz is doing the Dikembe Mutombo finger wag in this photo.

On Sunday, the 4-4 Philadelphia Eagles return home to Lincoln Financial Field for just the second time in their last six games. And that's a good thing, because the Birds are 3-0 at home this season, and they'll need all the help they can get against Matt Ryan, Julio Jones, and the 6-3 Atlanta Falcons.

It'll be a battle of opposing styles in more ways than one.

For Doug Pederson and the Eagles, their strength is on the defensive side of the ball. For Dan Quinn and the Falcons, their high-flying offense more than makes up for what they lack on defense. And the fact that they average a league-leading 6.8 yards per play (compared to the Eagles' below-average 5.3 YPP). While the Birds seem like the more well-rounded team on paper -- Carson Wentz and the offense are at least mediocre, whereas the Falcons D is among the worst in the league -- they're not the team with the better record.

But that's why they play the game, isn't it?

Here are five numbers to keep an eye on in South Philly on Sunday, in the form of our weekly over/unders:

That's currently the number being offered over at topbet.eu. And even though it's tied with the Cowboys-Steelers game for the highest in the NFL this weekend, it might not be high enough.

And on defense, Falcons are allowing nearly as many points as they score. They've also only played one game all season in which the total number of points scored by both teams was under 50.

Look for that to turn around on Sunday against a Falcons team that has allowed the most passing touchdowns in the NFL this season. Hopefully, Pederson and Co. will have a new game plan that doesn't rely so heavily on Wentz throwing the ball, but that can only happen if Jim Schwartz and the defense can avoid putting the Eagles in an early hole like the one they found themselves in last week against the Giants.

The Eagles were the early leaders in turnover differential this season, but that's changed quite a bit over the last month. After starting at +7 through four games, the Eagles are now at +6 overall after going -1 in their last four games and failing to win the turnover battle in any of them.

The Falcons don't turn it over often (seven this season) and have only done so more than once in a game one time this season.  Meanwhile, on defense, they've forced 10 takeaways compared to the Eagles 15. This is a hard one to call, but if the Birds want a shot in this game, they need to win the turnover battle. I just don't see that happening.

Pederson said to expect a bigger role for the speedy wideout from Cal this week. And there aren't many other teams you'd like to see him matched up against if you're looking for him to breakout. Treggs had two catches for 69 yards in his NFL debut against the Giants, but I have a good feeling he sees more than the four targets he saw a week ago. If the Eagles defense can't contain the Falcons, Pederson is going to need to find a way to chew up big chunks of yardage at a time in order to keep pace.

Add in the fact that CB Desmond Trufant may miss the game, making an already thin secondary even thinner, and Treggs could see some serious action on Sunday.

Did you know Matt Ryan went to Penn Charter and grew up an Eagles fan? It's true. You can find out all about during the FOX broadcast. I guarantee it.