Flyers goaltending is giving them life, amid scoring struggles 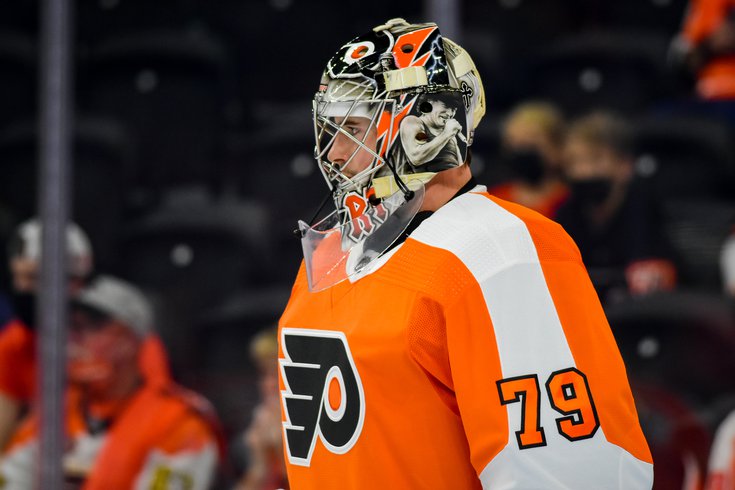 Goaltending is back in the City of Brotherly Love.

A season removed from one of the organization’s worst stretches between the pipes, Carter Hart and Martin Jones have come out of the gates as strong as they could have, giving the Philadelphia Flyers one of the best goalie tandems in the early going.

The Tuesday win over Calgary epitomized everything that is the Flyers this season. The Flames controlled the play right from the jump, pinning the Flyers in their own end and making life difficult for Hart, eventually getting one by him — off a challenging redirection — to take the early lead.

That would be the only fault of Hart all night as he stood on his head, turning away 33 of the Flames 34 shots in the 2-1 win overtime victory. The young netminder took the game upon his shoulders, realizing his offense was continuing its struggles, and won his team yet another game in the early going.

At this point in the season, Hart’s numbers speak for themselves. He's 5-3-2 on the young season with a 2.19 GAA and .935 save percentage, which is good for seventh in the league.

Coming over from San Jose, Jones, too, has been reliable in his four starts with an impressive .931 save percentage and 2.27 GAA. Those numbers are good for ninth and 12th best in the league, respectively.

The Flyers find themselves at 8-4-2 and in fourth place in the ridiculously difficult Metro Division all because of their netminders. Only Calgary can claim to have a goalie tandem of equal footing with the Flyers as both teams are the only squad with two goalies in the Top 10 for save percentage and Top 15 for GAA.

“We’re like every team in the NHL that wants to have success, you have to have good goaltending and we are definitely getting it right now,” said head coach Alain Vigneault after Hart’s first shutout of the season against Arizona, which jump started their goalie renaissance this month.

Pull up a chair because how they stack up across the NHL over the month of November is a sight to see. The pair are sporting a 2.43 GAA on the season, good enough for fourth best in the NHL. Since the start of November — right about the time when the offense took a step back — that number is an even 2.00. In that same span, the Flyers offense has a league-worst 1.86 goals per game; yet, the team is 4-2-1.

Some form of “Player X is carrying his team” often gets thrown around in situations where it doesn't apply, but in this case, Hart and Jones are truly taking this team upon their backs. No team with 2.38 goals or fewer in that timeframe have a .500 record besides the Flyers.

A goalie can pick his team up on a down scoring game on any given night. For these two, they're being asked to do so on a daily basis over the past few weeks and they've stepped up admirably. Hart has a stout .953 save percentage, 1.59 GAA and one shutout to boot over the last seven games. Not far behind is Jones and his 2.53 GAA over two starts this month.

Aiding the efforts of the goalies has also been the rebirth of the Flyers’ blue liners. They, too, can take a ton of credit in the sheer dominance this team is exhibiting in keeping the puck out of their own net.

Despite having their biggest offseason acquisition in Ryan Ellis for just four games and losing him again for the foreseeable future, Ivan Provorov and the grizzled veteran, Justin Braun, have formed a surprisingly strong top pair. It's also no coincidence that their styming goalie play lines up with Rasmus Ristolainen and Travis Sanheim finding their chemistry after a bumpy start. That pair has been a bright spot over the past seven games, highlighted by the former Buffalo Sabre racking up a season-best nine hits and three blocked shots in Tuesday’s win.

Watching the game Tuesday and throughout the first 14 games, the one thing that is quite noticeable is seeing Hart and Jones being in position before the puck is even shot. They also aren't fighting through deflections as often as last season nor having to cheat over to the far side as much due to far fewer defensive lapses compared to the 2019-20 season.

Hart even spoke about this following his shutout two weeks ago, crediting his defense for giving them clear vision.

“Our guys are doing their job in front of me of boxing guys out and letting me see the puck and of creating second chances, so we’ve done a good job of that so far,” Hart explained.

Another beauty from Hart pic.twitter.com/8heh77Jtjo

All of this has equated to a stifling penalty kill unit, something they haven't had in quite a while. The team is sixth this month with a PK success rate of 88.9. By comparison, the Flyers were second to last a year ago with an ugly 73.1 penalty kill rate.

What can’t be lost, however, with all of these wins is the fact that the Flyers offense has come to a complete halt over these past 10 games. The team has scored two or fewer goals in eight of its last nine outings, yet have a 5-3-1 record miraculously over that timeframe due to the determined work by the netminders.

“Sometimes, for whatever reason, the puck isn’t finding the back of the net so we got to keep playing the right way,” head coach Alain Vigneault explained following their 3-0 loss to Toronto on Nov. 10.

“We just need to get more greasy goals and get pucks through,” said Cam Atkinson after their 5-2 loss to Dallas over the weekend. Atkinson, of course, followed up on his words with the OT winner the next game. “It seems like we’re having a difficult time getting pucks to the net… we have to simply find ways to get the puck in that area so we can bang it home.”

The Flyers can take solace in knowing that there's a scoring outburst waiting inside them somewhere. A team just doesn't put up goals like they did at the start of the season and forget how to score. The numbers don't suggest anything egregious being wrong with them, either.

The eye test has the Flyers making the extra pass a bit more often than they should. There also are occasional lack of aggressiveness, as evidenced in their 5-on-3 on Tuesday where they kept things to the perimeter far too much instead of attacking the three Flames on the ice.

Their shot totals haven't fallen off, either. They've actually had some of their highest shot games over the last week. They're firing off 34.9 per game this month, which is sixth in the NHL.

This is just a case of a team in a rut, a rut that is taking them a little longer than they’d like to get out of. The easiest way for them to breakthrough, though, would be to capitalize on the man advantage. Only Pittsburgh and the New York Islanders have a worse powerplay in November as the Flyers are hitting at a dismal 8.3% in their last seven games.

As bad their power play struggles are, which only grew more worrisome after a season-worst 0-for-6 against Calgary while a man up, there will be positive correction. The Flyers were clicking at a 23.8% rate in October, which was actually a bit higher than the 20.1% mark they had in Vigneault’s first two seasons as coach.

Thankfully the team’s offensive slowdown has lined up with Hart standing on his head and Jones holding down the fort. If not for those two teaming up to be one of the top duos, the Flyers would find themselves in a hole in the Metro that would've been difficult to claw out from.

Instead, Hart and Jones are delivering on their offseason promises. Hart preached that he had cleared his mind from last season’s grim results and Jones vowed that he could regain his form in reuniting with his old goalie coach. So far both things are holding true and it has the Flyers in a great position through the first month of the season.