The decision (and price tag) make total sense now, but it still comes with some risks. 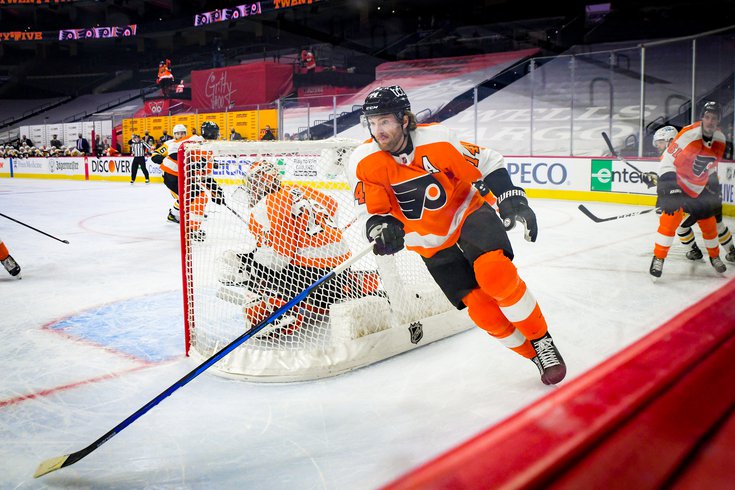 It appears 2021 won't be a contract year after all for Flyers center Sean Couturier, who has officially signed an eight-year extension with the team that will be worth $62 million (an average annual value of $7.75 million), general manager Chuck Fletcher announced on Thursday.

"We are excited to announce Sean’s long-term extension with the Flyers today," Fletcher said in a statement. "As one of the premier two-way centers in the NHL, Sean has the rare talent to shut down opposing team’s top players while also contributing at a high offensive level. Throughout his 10-year career with the Flyers, he has proven to be the ultimate teammate. He carries an enormous presence inside our dressing room due to his preparation, determination and drive to win."

The deal, which will go into effect beginning in the 2022-23 season, will keep Couturier, 28, in Philly through 2030 and comes with a no-move clause for the first seven years and a limited no-trade clause in the final year, Fletcher told reporters on a conference call following the announcement.

"He's a premier player. And it's a premier contract," Fletcher added, clearly signaling that the team holds the former Selke winner in high regard — as if the contract itself didn't already make that abundantly clear.

"He's a rare talent. You just can't find these players.

"Sean got a contract that he richly deserved."

“To be part of the Flyers organization for another eight years following next year is extremely exciting,” Couturier said. “I like the way the team is built and the mix of players that we have. I’m really looking forward to it but especially this year. We’ve made a lot of changes, but it’s all positive and very exciting.”

The move is further proof that this team is not preparing for a rebuild and rather considers themselves a contender right now. Their aggressive approach to the rest of the offseason was likely the first indication that this team is looking for a much different outcome than last season, but this move should solidify that stance, as rebuilding teams typically don't re-sign veterans to massive deals that will keep them well-paid until they're 37.

The team also has to decide whether or not to extend captain Claude Giroux, who is entering a contract year himself. According to Fletcher, conversations have been good but that deal will wait until the end of the season, and Giroux will play this season without an extension. However, it appears both sides are eyeing another pact although the length and term remains to be seen.

For now, inking Couturier was the priority, as Fletcher said not getting a deal done and potentially losing him next offseason would've "changed the direction of the franchise." Now, the Flyers don't need to worry about losing their "best hockey player," as the GM referred to him, any time soon.

“Sean is a cornerstone of this team, and we are thrilled that he’ll be in Orange and Black for years to come,” said Dave Scott, Governor of the Flyers. “With his leadership, grit, and ability on both ends of the ice, Sean is essential to the future of this team, and we couldn’t be happier to keep him in Philadelphia for the long term.”

This season will be Couturier's 11th in the NHL after being selected eighth overall in the 2011 NHL Draft. After finishing second in 2018 for the Selke Trophy, given to the NHL's best defensive forward, Couturier became the third Flyer to win the prestigious award in 2020. He's also been voted the Flyers' MVP for each of the last three years, something that hasn't been done since Eric Lindros did it in the mid-90s.

Last season, Courturier posted 41 points in 45 games during a COVID-shortened campaign. A year earlier, before COVID paused the season in March, Couturier was closing in on his third-straight 70-point season, having posted 59 points through 69 games when the stoppage hit. According to the Flyers, "Couturier has averaged 0.91 points per game over the past four campaigns, which is second-best of any Flyer in that timeframe behind only Claude Giroux’s 0.99 PPG."

Couturier not only plays on both the power play and the penalty kill, but excels in both areas. He's among the best in the NHL at winning face-offs and unsurprisingly is one of the Flyers' leaders in time on ice. And he's in his prime. Locking him up made all the sense in the world.

But that doesn't mean the deal doesn't come without risks.

Couturier is one of the game's best two-way centers and is well worth his price-tag now... but it feels a bit unlikely that will be the case from age 30-to-36. Regardless, it's *very* well deserved considering how grossly underpaid he was on his previous deal. pic.twitter.com/BXsg93rjth

While there's plenty of value in Couturier at a $7.75 million AAV now, the same might not be said in the sixth, seventh or eighth year of the deal. But that's part of the tradeoff when you sign these kinds of contracts — value on the front end and concerns on the back. The only way it really becomes a problem for the Flyers is if that value becomes suspect earlier, say in Years 3-5. Nothing in Couturier's career suggests that's going to happen, but Father Time comes for us all, and you never really know when that's going to happen.

In a vacuum, it’s easy to justify the Flyers signing Couturier to that extension. As that tweet above notes, it feels just, as he was underpaid for so much of his career.

But when you zoom out, it’s also fair to get a little worried about Chuck Fletcher‘s long-term commitments. ...

Overall, the Flyers sure feel heavy on big-time commitments for a team that missed the 2020 Stanley Cup Playoffs. There’s reason to worry that Chuck Fletcher is saddling the Flyers with long-term risks in the same way that he burdened the Wild.

Couturier’s extension seems like one of the Flyers’ more reasonable risks, but it could still backfire. ...

In the grand scheme of things, the Couturier extension makes sense for the Flyers. You can justify the long-term risks thanks to the short (and maybe medium) rewards. And Couturier’s demise might not be so grim if he ages like, say, Patrice Bergeron. (Bergeron, somehow, is 36.)

That said, don’t let Philly totally off the hook if this all crumbles really soon.  [ProHockeyTalk]

Over at The Athletic, however, Charlie O'Connor believes that despite the risks, the deal is worth it with Fletcher appearing to be in win-now mode.

How risky is the term?

Charlie O'Connor, Flyers beat writer: It's absolutely a risk. Couturier will be 37 when the deal expires after the 2029-30 season. Signing any player — even one as effective as Couturier — through nearly all of his thirties is going to come with serious risk.

That said, getting Couturier at a cap hit below $8 million makes the term a risk worth taking. It's less than Logan Couture received on his eight-year deal back in 2018, and Couturier has one more trophy (the Selke in 2020), one more 30-goal season and two more 70-point seasons than Couture did when he signed his deal.

The Flyers traded term for a legitimate discount when looking at Couturier's comparables, and given Fletcher's belief that the team is in win-now mode, it's hard to fault them for making that wager.  [The Athletic]

It's also worth noting that it appears Couturier was flexible with his AAV in order to give Fletcher and Co. some flexibility in their quest to build a contender.

Fletcher says that Couturier worked with the Flyers on the AAV, because "he wants to win." He wants the Flyers to be able to build around him.

But as O'Connor's colleague Dom Luszczyszyn again points out (as he did in his tweet above), this all depends how Couturier ages.

Dom Luszczyszyn, NHL analytics writer: Everything depends on how gracefully Couturier can age. He’s well worth the cap hit now, which only expects a low-end top-line center, but as he enters the back half of his deal, there’s a high chance he may not be able to live up to his price tag.

After about four years is when we should expect Couturier to drop below top line level, with only rare exceptions like Patrice Bergeron or Henrik Zetterberg bucking the trend. Couturier isn’t quite on the level either was at the same age.  [The Athletic]

Of course, there's also the rising salary cap, which should begin to go back up following a couple of flat years due to the pandemic. And if it does, an AAV of $7.75 million might not look that bad even if Couturier begins showing his age in the latter years of the contract.

For now, however, the Flyers are just happy to have their guy signed.