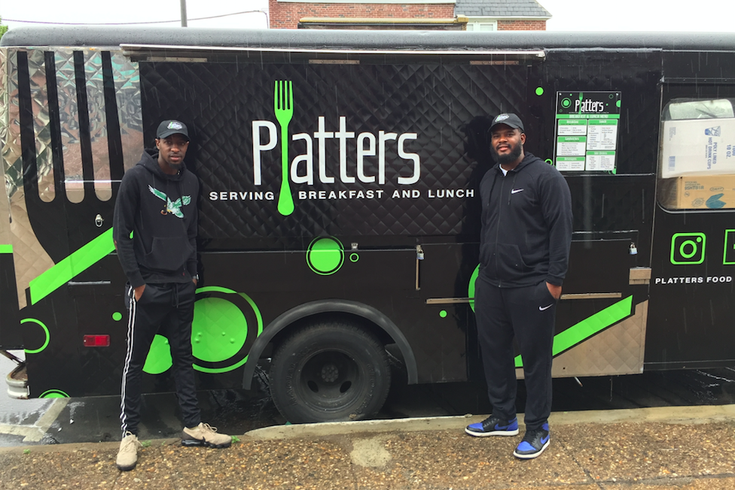 Jordan Johnson and Robert Green stand outside of the food truck they had city approval to open for business. Bureaucratic miscommunication forced the Overbrook Park entrepreneurs to close after just six days of operation. They are seeking to reopen.

Robert Green and Jordan Johnson still haven’t gotten clearance to reopen their food truck in the city's Overbrook Park neighborhood, but its controversial closure has sparked an ongoing discussion between the entrepreneurs, community leaders, residents and elected officials.

Earlier this week, PhillyVoice reported the business partners’ story of getting approval to operate Platters Food Truck outside their Hairitage Barbershop at Drexel Road and Haverford Avenue.

It was a short-lived endeavor. Six days later, a representative of the Department of Licenses and Inspections arrived to tell them they could no longer operate in their intended location.

Per L&I spokeswoman Karen Guss, it wasn’t a total shutdown. They could still serve their breakfast an lunch anywhere in the city where mobile vending is not “expressly restricted.”

While Guss said “the Platters operators’ license was not a license to vend right outside of their barbershop," the men’s business and marketing plan tied it into being there, and in their community. Suffice it to say, they were taken aback.

The quick shift came after Mayor James Kenney signed off on City Councilman Curtis Jones’ ordinance amending the “sidewalk sales” portion of city code by “prohibiting vending on both sides of Haverford Avenue between Brookhaven Road and Lansdowne Avenue, all under certain terms and conditions.”

Two days after the PhillyVoice story, Jones convened a meeting to discuss how best to move forward.

“The meeting was productive,” said Charlita Davis, Jones’ deputy chief of staff. “At the councilman's request, Marc Reason and William Nasir agreed to schedule a meeting with the residents of the block, the young men, and other business owners who are located near the barbershop and discuss the issue and everyone's concerns and come to a resolution.”

She noted that Nasir and Reason will work together to schedule that meeting and let Jones know so he can attend.

Nasir had already said that he thinks the entrepreneurs’ plan “is a wonderful thing.” Reason, who didn’t comment for the initial story, made his thoughts known via an email exchange late Thursday night.

He wrote that he “purposely stayed out of the food-truck issue because I believed, and still believe, it is a block issue.”

“I believe the residents' voices should be heard,” he continued. “Since social-media campaigns have been started, and newspaper articles have suggested that people that look like each other are trying to keep one group from conducting a mobile business, I felt the need to speak out.”

The truck – which was the subject of two calls to 311 before it was in operation, per L&I – is parked on Haverford Avenue, but Reason aligned with those on Drexel Road.

“I don’t want a food truck on my block just like the residents on Drexel Road don’t want one on their block,” he said, contradicting Green’s assertion that the businessmen collected much support from neighbors before opening. “I, Mark A. Reason, support my community and my neighbors.

“That doesn’t make me anti-business, anti-young black males. It just makes me a good neighbor. I stand with Drexel Road residents.”

For Drexel Road block captain Samantha Gordon, the bad blood goes back to February, when the truck was parked at the end of her street months before the entrepreneurs purchased, revitalized and painted it.

Gordon, who has lived there for 20 years, claimed the men never approached her with information about their plans. Had they done so, they would have learned of the then-proposed amendment, she said.

"Later, they brought it to us as a black-owned business, something positive for the community, help with gun violence, blah, blah, blah," she said Friday morning. "You haven't contributed anything to the community as a barbershop. Now you want to add to your business? Why are they so adamant about having it there?"

For Gordon, the food truck boils down to being a bad precedent.

"There are no vending trucks in the neighborhood. Never have been. If we let one in, we'll have to do multiples, and we don't want that," she said. "Now they're getting everyone who doesn't live in the neighborhood on their side. It's not cool. It's not nice. The legislation is what it is. This shouldn't even be a conversation or discussion. They were in the wrong and they're trying to blame everyone else.

"We're not anti-black business. Let's get that straight. We just don't want that truck on our block."

Still, the entrepreneurs who say they're the youngest black business owners in the neighborhood claim they've done their due diligence, speaking with residents about their plans in recent months. They've also garnered substantial support, they said.

Johnson wondered aloud why Reason is "trying to speak for everyone that lives on Drexel Road while he doesn't even live there."

"Since we weren't at the meeting, all we got was hearsay. They're just dancing around the issue," he said. "We presented the councilman with what we needed to show him we had community support. I'm not really sure what's left for us to do. We've walked around talking to people, meeting people. I think they're afraid to make the right decision."