For Eagles fans deep in enemy territory, life can be 'pure hell' 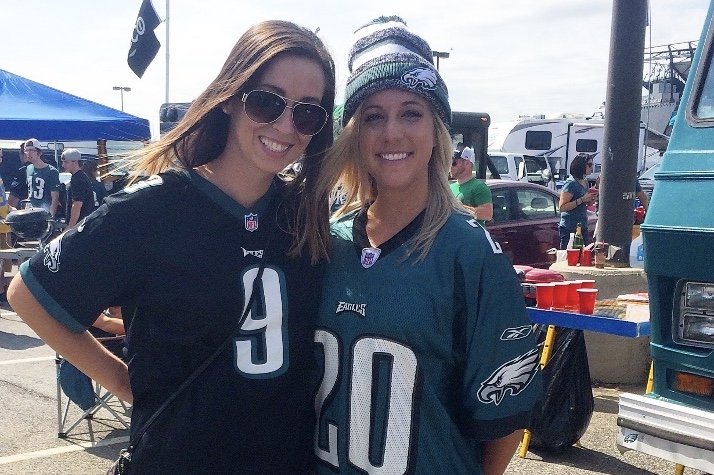 Jordan Laverty, right, with Alexa Garrity, tailgate at an Eagles game. Laverty grew up in Aston, Delaware County, but now lives in Boston, where she still flaunts her Birds' gear.

Every morning, Jordan Laverty wakes up in her Boston home to find a new text message asking if she's ready to watch her beloved Eagles lose Super Bowl LII to the New England Patriots.

From there, the messages only continue.

At work, Laverty is inundated with emails extolling Tom Brady, Bill Belichick and their five Super Bowl wins. One client simply sent a picture of a goat, a subtle reminder of quarterback Brady's status – like him or hate him – as the greatest of all time.

And there's no reprieve at home, where her roommate talks more smack about the Eagles. Even watching the local news is insufferable.

"I'm really excited for the Super Bowl," said Laverty, 25, a biotechnology sales rep with Thomas Scientific who grew up in Aston, Delaware County. "But I'm so sick of hearing about it."

A Super Bowl win will bring euphoria to Eagles fans everywhere. But for those living in the Boston region, a loss would bring the worst form of suffering.

As the region revels in the Eagles' unexpected trip to Minneapolis, Philly transplants are left defending the Birds' honor and demanding respect.

But in many ways, Laverty insists it's more fun living in enemy territory. Especially since Eagles fans never shy from wearing their gear, no matter how fierce the competition.

Bostonians give Laverty a passing glare as she parades around town in her Eagles coat and winter hat, miffed that she has such audacity.

"I get that look a lot, which is kind of funny," Laverty said. "I wear it so proud. I just smile at them."

Last week, Laverty wore an Eagles tank top to her gym. It didn't go without notice.

"One guy started a slow clap for the Patriots," Laverty said. "They were all clapping at me. It was all in good fun."

At least for the Super Bowl, Laverty will be free of any taunting. She's returning to Aston this weekend to take in the game with her family. Then, she will remain in Philly on a conveniently-timed business trip.

So if the Birds pull off the upset ...

That "would be amazing, because I'm staying at the Bellevue," Laverty said. "If we win, for the parade, I'd be right there."

'THEY THINK THEY'RE GOD'

Other Eagles fans are not nearly as fortunate – especially those living in the more rural portions of New England.

Matt Dailey, 27, grew up watching the Eagles with his friends in Haverford, Delaware County. But it's a different world up in northwestern Massachusetts, where to his knowledge, he's the only Eagles fan living in Williamstown.

"Their fans are obnoxious. They're so smug .... When the playoffs start, they're already asking their friends what they're doing for the parade. It's like they already know they're going to win." – Michael Tabor, 41, of Glassboro, former longtime resident of New England

Come Sunday, Dailey will be surrounded by about 20 Patriots fans as they gather at a friend's house. They did the same for the AFC Championship game, when the Patriots came from behind to beat the Jacksonville Jaguars, 24-20.

"They all stayed and watched the Eagles game for me," said Dailey, who apparently has lost none of his Delco demeanor. "Seeing the Pats do just enough to win and then seeing the Eagles blowing out (the Vikings) – I was talking s**t the whole time. I think most of them left because I was screaming the whole time."

Dailey doesn't intend to let up during the Super Bowl, either. And if the Eagles win, his friends can expect to hear about it.

"For me, it's going to be awesome," Dailey said. "For them, they're just going to say that it's just a fluke. Even if they do win, none of my friends will give me the respect for the Eagles." 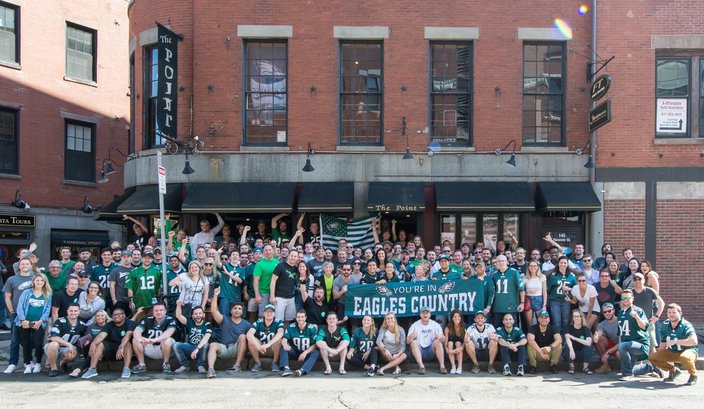 Scores of Eagles fans gather each Sunday at The Point, a Boston bar that has become a hotspot for Birds fanatics living in New England. This Sunday's Super Bowl game will be no different.

BIRDS OF A FEATHER

Michael Tabor, 41, of Glassboro, New Jersey, can relate to Dailey's situation. He spent more than 20 years in New England, living in New Hampshire and Boston.

"Their fans are obnoxious. They're so smug," Tabor said. "They'll try to rub it in your face and be smug. When the playoffs start, they're already asking their friends what they're doing for the parade. It's like they already know they're going to win.

"So, that's extremely annoying. Being a Philly fan, you're extremely, cautiously optimistic."

But it wasn't always that way.

When Tabor moved to New Hampshire in 1994, the Patriots had never won a Super Bowl. The Red Sox hadn't won the World Series since 1918. And the Bruins hadn't captured the Stanley Cup since 1972.

Save the Celtics, who owned 16 NBA titles but none since 1986, Boston wasn't all that different from Philly. But in the last 17 years, Boston teams have won 10 championships. Philly notched just one.

And Tabor has noticed a change in attitude.

But he has a theory – though it might be difficult to prove.

Tabor insists someone from Boston must have sold their soul to the devil, just as legendary blues guitarist Robert Johnson allegedly did at a crossroads in Mississippi.

"I don't know how many cities there are with four sports teams," Tabor said. "But the Patriots have five, the Red Sox three and the Bruins and Celtics one. That's 10 in the past 17 years. That's just unreal."

Philadelphia has had just 10 championships for all time.

Still, Philly transplants can thank Tabor and his friends for making their rooting experience a little more bearable.

More than a decade ago, Tabor helped organize a group of Eagles fans who met each Sunday to watch the game. They began gathering in a back room of a bar not far from fabled Fenway Park.

"We would only allow Eagles fans," Tabor said. "People could bring their friends, but they had to keep quiet. No opposing fans."

Over the years, the group – which lists 1,724 members on Facebook – moved from bar to bar, gaining a large contingent of Birds backers.

Now, they overtake The Point, a pub in the heart of Boston. On Sunday, The Point will be teeming with hundreds of Eagles fans, having already sold out its seats for the game.

Tabor, who moved to New Jersey two years ago, misses the atmosphere. Each week, fans gather to share a common rooting interest and conduct raffles to benefit charities.

"At the bar, it's just all Eagles fans," Tabor said. "There's no Patriots fans harassing us or anything. There's no yelling or fighting or anything like that. Walking around town, you might get people yelling at you.

Kristen Mancano is relatively new to that experience, having moved up to Boston last year for grad school.

"It's really a different climate when it comes to sports up here," Mancano said. "I think Philly is so used to not being the best. They get to the end and choke. People up here have this really ugly superiority when it comes to football."

Mancano, 24, grew up in South Philly and Cherry Hill, New Jersey. She remembers feeling nervous when the Eagles went to Super Bowl XXXIX in 2005, losing to the Patriots in Jacksonville.

"It's definitely less of a big deal, [in Boston]. People don't take off days from work. They're just like, 'Oh, it will happen again next year.'" – Kristen Mancano, Philly native and current Boston resident

But that anxiousness is mostly absent among Patriot fans.

"They've got this whole sense of we're going to win when you talk about it," Mancano said. "It's an interesting feeling in that sense. There's significantly less nervousness."

Last year, she traveled up to Boston to visit her boyfriend during Super Bowl weekend. Despite the Pats' fifth Super Bowl win, the celebrations seemed muted.

"It's definitely less of a big deal," Mancano said. "People don't take off days from work. They're just like, 'Oh, it will happen again next year.' It's a thing, but it's definitely not as big of a thing as if the Eagles won."

If the Eagles do win, Mancano said she will be disappointed to miss the city's celebration.

"I miss Philly, in general, because that's where I had been for so much of my life," Mancano said. "I'll definitely miss it in this event. I was around when the Phillies won the World Series and that was insanity."

Now, she finds herself in enemy territory. Even her boyfriend is a Patriots fan, although Mancano says neither she nor her boyfriend are diehard fans. She expects their relationship to survive whatever occurs during the Super Bowl.

But for many Eagles fans living in Boston, there's a lot at stake.

A loss means they'll have to endure a week of celebrations as they sulk about how close they came to finally winning it all. Boston will chock full of reminders of their pain.