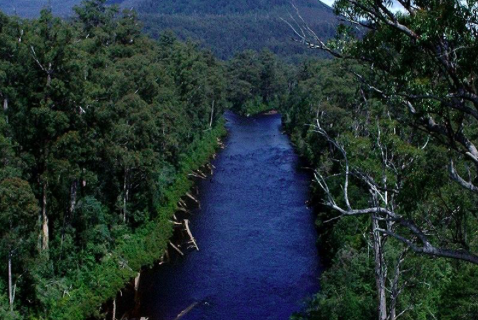 The Huon River is runs through the island state of Tasmania, Australia, where researchers discovered a fungus that may contain pain-relieving peptides.

As medical researchers continue to search for new ways to deliver pain relief, a team of scientists in Australia may have found a fungus that will potentially offer an alternative to opioids.

The devastation of the opioid epidemic has forced the medical world to reevaluate how to treat chronic pain in ways that don't carry the same risk of dependence and fatal overdose.

Researchers from the University of Sydney made a novel discovery recently in an estuary in Tasmania's Huon Valley that shows promise as a pain reliever, according to Medical News Today.

A naturally occurring fungus of the species Penicillum was found to contain a set of molecules called tetrapeptides. These short-chain amino acids interact with other molecules in the body based on their geometric structures.

What stood out about the tetrapeptides in this fungus was that their molecular structure displays an orientation rarely found in nature. The "chirality" of a molecule refers to its "handedness," which in turn dictates how it will react with other molecules.

Most naturally occurring amino acids show left-handed structures, including those in mammals. The tetrapeptides found in Australia have a right-handed structure, making them ideal for investigation in drug development, researchers said in a study published in the journal PNAS.

The molecules have a structure similar to endomorphins, the natural opioid chemical messengers that help with pain relief.

"No one had ever pulled anything out of nature, anything more ancient than a vertebrate that seemed to act on opiate receptors — and we found it," said Senior Author Macdonald Christie.

With a patent now filed on the fungus, researchers believe it could be ten years before any potential drug could become commercially available. If they can develop a successful drug, however, it may have the power to treat pain with significantly reduced side effects and risk of overdose.