Illustrated rock and roll, unabashed nudes, and astrological and pagan-inspired paintings are just some of June's offerings

“Illustrated Rock and Roll, Volume One” by Mike Jackson

If someone demanded you name a song that means something to you, which would it be, and why?

Local artist Mike Jackson’s been asking “Why that one?” when people request he illustrate songs for his Illustrated Rock and Roll project (which has become two self-produced books). 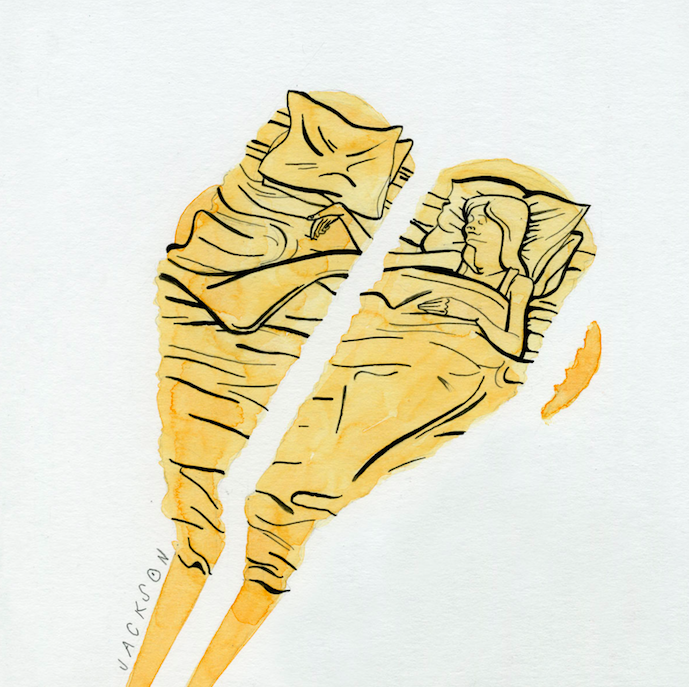 “The Shirelles' 'Will You Love Me Tomorrow'” by Mike Jackson

“Everyone smiled when I asked,” he says. “Each requester had a wonderful memory associated with that song, or it represented some part of them.”


About a quarter of the project comes from requests; the rest are a product of Jackson’s planning and curation. He made a new song illustration every Friday from May last year, until now. This exhibition will showcase half of the resulting works, which are compiled in the Volume One book.

Jackson made a spreadsheet early on to keep track of “when it might be good to follow X song with Y song. Kind of like when building a playlist in Spotify—or the eight-disc Ultimate Party Mix my wife made in college,” he says.

“The spreadsheet also helped me stay conscious of not drawing too many songs from the white male perspective. Too many of my favorite singers/bands fall into that bucket, and I need to break that,” Jackson says.

Picking some songs was tougher than he thought it would be, he explains. Sam Cooke, for example: “His genius is in his singing, not so much his lyrics. I also worried I wouldn’t be able to live up to the status to which I held some songs. That’s why I didn’t ever consider The Beatles—they’re the top of the mountain.”

Jackson shares the “why” behind one of his personal favorites: “She’s Electric” by Oasis.

“I used to play that song endlessly in high school, and I chose to do it the week after seeing an Oasis documentary in the theater with my 20-year-old brother. I think he thinks the ‘90s were, like, three Sugar Ray songs and that one Smashmouth song, so bridging that gap with him was incredibly fun.”

Check out the series here.

This year marks the 50th anniversary of the Loving v. Virginia Supreme Court decision, which nixed laws banning interracial marriage. Mildred Loving, a black woman, and Richard Loving, a white man, were sentenced to a year in prison for their marriage. The Supremes said “hell no” to that, and the decision has set the standard for others regarding civil rights restrictions, like on same-sex marriage (hey, it’s Pride Month!).

“This political moment adds another context,” he says. “It becomes all the more important to look back to an example of how we overcame another moment of injustice.”

Featured: “The Loving Project” podcast spans a year of interviews with interracial couples; a painting called “Lullaby” by Hiro Sakaguchi, who painted it when his half-Japanese, half-caucasian daughter, Aya, was born, “to introduce her to her home country of Japan,” Kyu says.

The title of the exhibition, Kyu says, beyond the nod to the Constitution’s preamble, “refers to the give and take in any union of marriage, the fragile and delicate and beautiful balance of separate lives, of separate identities, that become shared, that become singular.”

Da Vinci Art Alliance is describing this show as “a visual tribute to friendship and the feminine.” Emily Townsend and Hannah Coal have been friends and collaborators for years, and explain further:

Coal says the work explores “the experience of being female (or femme-identified) and its challenges, as well as the mystery and beauty in it.” 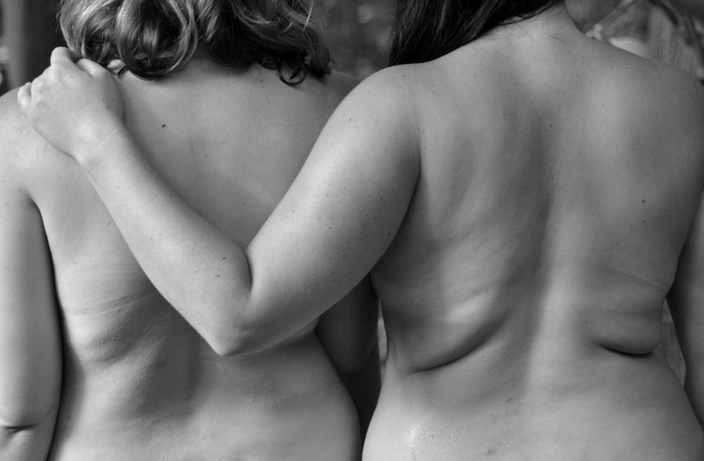 Townsend has created a photography series she calls her “body series.” It features a variety of body types, and “expresses the mere bravery it takes to show some skin and feel good about it,” Townsend says. The photographs will feature summaries of the model’s perspective and what led them to posing nude.


The positivity and reverence the two direct toward each other is uplifting, too.

“There is an angelic breath to her work that always inherently pushes boundaries and depths,” Townsend says of Coal.

“This show is a great accomplishment and celebration of the friendship and hardships we have endured.”

About the artists: Riddle’s a photographer and “aspiring taxidermist” -- see her Instagram, @jahnariddle, for a shot of a gray catbird (a real thing) resting in peace alongside the hashtag #thatbirdisdead -- and Volkova is self-described on her website as a “delightful sandwich currently residing in Philadelphia.” 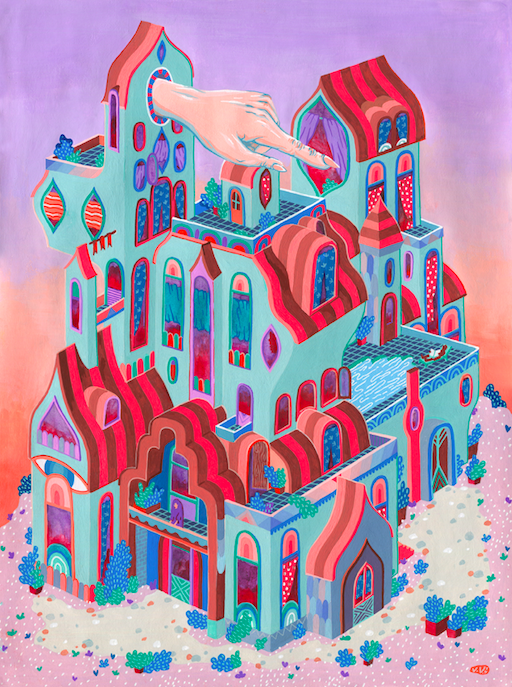 But for real, Volkova describes some of the works in this show as a mix of several different series she’s been working on, including a lot of architectural paintings.

“I’m a big building nerd and I’m always trying to create my own style of architecture. Houses are really peaceful objects for me. I wish our city were more colorful, that dwellings represented the personalities of the people inside.”

Imagine the Philadelphia of Volkova’s dreams as seen in her work -- houses bursting with dozens of saturated colors, phantom giant hands jutting out from windows, and Escher-like dizzying staircases.

“I think a lot of people assume my headspace is rather drug-fueled, but my work comes from a much simpler, quieter place. The varied and character-filled neighborhoods of Philly, where I live, and Brooklyn, where I went to school, are also a constant inspiration.”

Yeah, yeah, the first day of summer isn’t officially until June 21, but the weather’s already gracing us with our annual boost in Vitamin D; to commemorate, curatorial group Nice Futures has brought together 18 artists exploring “the many perspectives of the yearly Midsummer.” 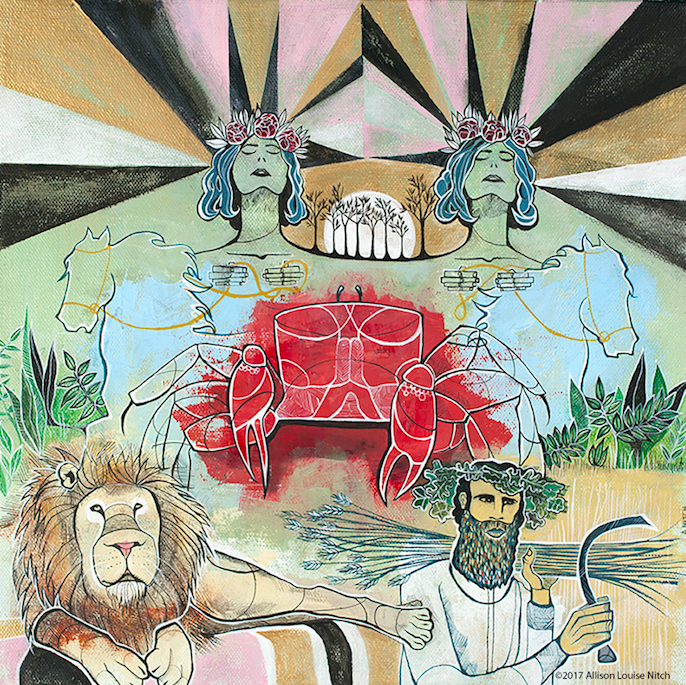 Allison Louise Nitch is one such artist in the group, and told PhillyVoice a bit about her piece, Ushering.


“My painting was inspired by astrological and pagan symbolism. When I received the description of the show, the idea of astrology and summer babies immediately came to mind,” Nitch explains. The summer solstice begins just as the sign of Gemini wraps up, ushering in Cancer, Leo, and Virgo -- check the astrological figures in her painting.

Nitch says she’s excited to see how many artists interpret one theme -- she, for one, has been “trying not to overthink things” lately. “The weirder, the better--that’s the mind space I’m striving to work from.”

DJ Jazzy Jeff & the Fresh Prince are currently playing in her head, too, she says: “Happy summertime, everybody!”