Galvis making everyone forget Rollins is no longer with Phillies 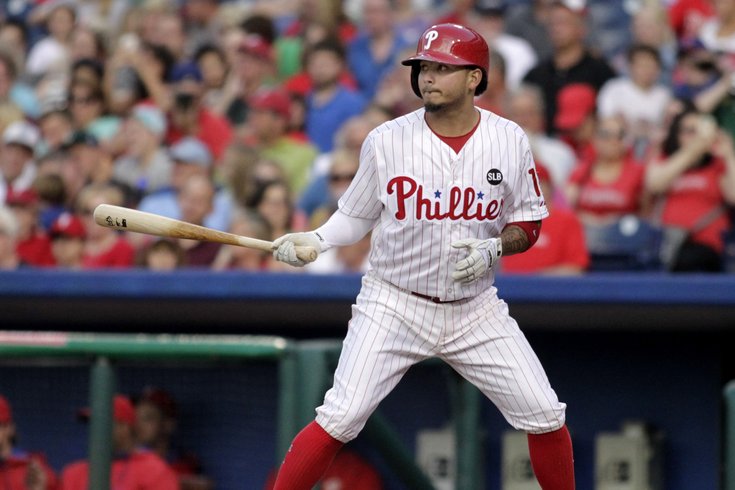 Phillies shortstop Freddy Galvis is out of the leadoff spot after five games -- perhaps because he hasn’t worked a walk in 95 plate appearances since the beginning of spring training.

What a difference a year makes.

At this time last year, Freddy Galvis had already overcome a bout with MRSA that began during spring training, played in 16 games with the Phillies before bring sent to the minor, and was already back on the disabled list with a fractured clavicle.

Through those first 16 games, Galvis was hitting an abysmal .048 (2-for-42) and split time between third base, shortstop and second base.

Jimmy Rollins was the everyday shortstop. Cody Asche at third base. And Chase Utley at second. Galvis was without a position, and without a real role on a team that would struggle to finish 73-89.

After returning from the collarbone injury in late August, however, Galvis was a totally different player, hitting .247 over his final 27 games. Then, in the offseason, Rollins was traded to the Dodgers after 15 seasons in red pinstripes, opening the door for Galvis, 25, to earn the starting shortstop job.

His increased production during the second half of the season seemed to carry over to 2015, as Galvis (.336) is leading the team in batting average is tied for fifth in the National League among qualified batters.

Some of his struggles last season could have been a result of lingering effects of MRSA carrying into the 2014 season, but his health isn't the only reason for the improvement. At least not according to his manager, Ryne Sandberg.

“This is the first year in Major League Baseball that Freddy has had a chance to play every day and have at-bats, make adjustments, have an approach, and work on things," Sandberg said earlier this week. "He has shown the signs of hitting the ball in winter ball when he’s had a chance the last couple of years.

“He’s really settling in as an everyday shortstop and doing a heck of a job for us on both sides of the ball right now," Sandberg said of Galvis.

"So now with the opportunity, at-bats, games played, and approach that is coached to him on what his job is with the bat and in the lineup, I think he’s really taken to that. This is an extended amount of a guy being hot, so I think he’s doing a real good job staying with the approach and really making the most of it.”

Making the most of it would be an understatement.

*He also delivered the go-ahead RBI in the fifth inning and drew a 2-out walk in the eighth.

Galvis has carved out a spot in the Phillies' everyday lineup and made most fans forget about the former MVP that he replaced.

Three thousand miles away in Los Angeles, Rollins is now on a first-place team but is personally having the worst season of his career, hitting .174 through 31 games with the Dodgers. His previous season low in batting average was .243, which came in 2010 and again in 2014.

It's so bad for Rollins that entering play Wednesday, he was second to last in the NL in batting average among qualified hitters. The only one worse? His old* double-play partner Chase Utley.

This from Joel Sherman of The New York Post on Tuesday:

The worst two batting averages in the NL belong to one of the historic double-play combos in history: Philadelphia’s Chase Utley (.122) and Jimmy Rollins (.165), who was traded from the Phillies to the Dodgers this past offseason.

The acquisition of Rollins was just a one-year stopgap until Corey Seager was ready. Seager lit up Double-A (1.082 OPS), but in his first 10 games at Triple-A was at just .566.

As for Utley, a scout said, “It is like watching [Derek] Jeter the last few years, it is someone I admire and respect so much as a baseball person, it is just hard to write the reports about how much they have fallen off. It was the same with Cal [Ripken Jr.] late in his career. This isn’t a blip [for Utley], this is a real decline. He just doesn’t keep the bat in the zone as long as he used to.”   [nypost.com]

Perhaps that's why it's so easy to gloss over the fact that a 15-year stalwart at the top of the order is no longer there. Just think about what we would be saying if Rollins had a .336 average this season while Galvis was below the Mendoza line.

"I'm just trying to do my job," Galvis said about replacing Rollins. "I just want to come here every day, play hard, and that's it."

The Phillies' offense has been bad enough with Galvis in the lineup, ranking dead last in the NL in runs, home runs, on-base percentage, slugging percentage, and total bases. They're second to last in batting average and third from the bottom in runs scored. If you take Galvis out of the lineup, the team batting average* (non-pitchers) would fall 11 points, from .234 to .223. And if you replace his numbers with those of Rollins, the team average falls another five points to .218.

*Prior to Wednesday's game.

But these are the kinds of things we talk about; the stuff that makes for a good column or interesting talk radio fodder. When I asked Galvis about filling Rollins' shoes, he looked at me like I was crazy, and rightfully so. He's concerned with doing his job, and not how his numbers compare to the shortstop that came before him.

"I'm just trying to do my job," Galvis said about replacing Rollins. "I just want to come here every day, play hard, and that's it."

Nevertheless, the opportunity given to Galvis this season is largely due to his predecessor's departure. Otherwise, the all-important "every day" portion of his winning formula falls out as he would be position-less for yet another season, playing only when one of the other infielders needed a day off.

But it hasn't just been the continued repetition for Galvis at short.

Suddenly, he doesn't just have a position with the Phillies, he has a role in their lineup as well. He knows* what he is capable of at the plate, and according to Sandberg, he's been doing a great job of staying within his game and not pressing or trying to do too much, even though he's moved to the No. 2 spot in the order for the foreseeable future.

*Ask him about his improvement this season and you'll hear a lot about contact, line drives, and just putting the ball in play.

“The fact that he’s just trying to get on base and be a baserunner and he’s trying to just maintain a hard ground ball stroke, said Sandberg of his shortstop's improvement. "That mentality along with his ability to react on a pitch and hit a double or home run occasionally, but then sticking with that approach, I think that’s what he’s done very well at this point, not trying to do too much or get too big.”

All of that comes with knowing your role within a team and not having to continually look over your shoulder to see who is coming to take your job, something recently demoted third baseman Cody Asche can attest to.

Sure, the Phillies' top prospect, J.P. Crawford, also plays shortstop, meaning Galvis isn't completely in the clear, but that's over a year or two away. And if Galvis keeps hitting like he's been -- we all know he can field -- the Phillies will find a spot* for him.

*There should be an opening at second base in the near future.

In the interim, Galvis is making the most of the opportunity he's been given and impressing his manager in the process, although the rest of the lineup is helping him in that regard, making him look like Honus Wagner by comparison.

“He’s really settling in as an everyday shortstop and doing a heck of a job for us on both sides of the ball right now," Sandberg said. "That’s a big plus and a big improvement in what he’s doing.”

It's only been a year, but the improvement in Galvis is staggering. He's healthy. He knows his role. And it's showing -- just like his name on the lineup card -- day after day.