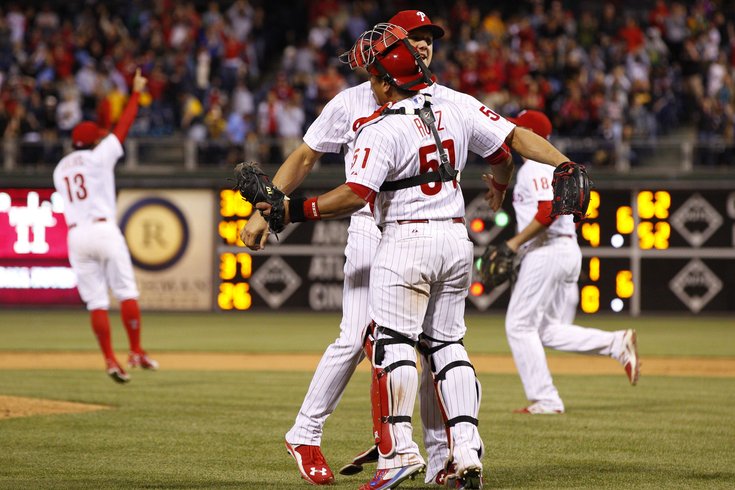 The Phillies, losers of six of their previous seven games, finally had some good fortune Wednesday night as they beat the Pirates, 3-2, at Citizens Bank Park behind a strong performance from starting pitcher Cole Hamels.

After falling behind 2-0 in the fifth inning, the Phillies responded with three runs of their own in the bottom half of the frame, with the final -- and game-winning -- run coming off the bat of red-hot shortstop Freddy Galvis.

Here are some instant observations from the game:

Jonathan Papelbon recorded his 113th save with the Phillies, overtaking Jose Mesa as the team's all-time leader in that category.

It almost didn't happen after a bad throw from Papelbon resulted in a two-base error and allowed Steve Lombardozzi to advance to third with just one out. He was bailed out by right fielder Jeff Francoeur, who settled under a Jordy Mercer fly ball in foul territory and gunned Lombardozzi out at the plate to end the game.

It was the opposite of a walk-off win, but it's a win nonetheless.

"I guess if there's one way to do it, that's the way to do it; go out in an exciting way," Papelbon told reporters. "You know, I've always said that a closer is nobody without the people in front of him and the teammates in front of him, so I think tonight is kind of ironic because I don't get that opportunity if my teammates don't pick me up and make plays behind me."

That was never more true than it was tonight.

The entire situation in the bottom of the ninth -- a runner on third with less than two outs in a one run game -- was because of Papelbon. First, he walked Francisco Cervelli. Then the two-base throwing error by the closer put Lombardozzi, who pinch ran for Cervelli, 90 feet from tying the game.

Even when Mercer lifted the ball down the right field line, instinct kicked it and I immediately found myself thinking, "Drop it. Drop it. Drop it." It would have been a foul ball anyway.

But not Papelbon. He's a closer (read: slightly crazy). It's all or nothing. Right?

Wrong. Not only was he confident Francoeur was going to make the game-ending play, Papelbon had set the whole thing up.

"My whole approach to Mercer in that at-bat was to stay away from him," he said. "Just in case I did get the fly ball, Frenchy was the one I wanted them to hit it to. You know, the ball kept kinda coming in and blowing back in towards home plate a little bit more. And for a second there, I didn't think [Mercer] was going to go because [the ball] kind of came in on him so much. But once he went, I was kind of glad to see him go because I knew Frenchy had a good chance of throwing him out."

After the game, Papelbon said he had "something special" for his right fielder and presented him with a bottle of Johnny Walker Blue Label -- yes, that's the really expensive one -- as a way of saying thanks for bailing him out.

Papelbon later called across the clubhouse to Francoeur, "Hey, Frenchy, bring that bottle with you on the next road trip."

Hamels on the hill

He may not have been as good as Corey Kluber on Wednesday night, but Hamels got the job done against the Pirates.

The Phillies most-coveted trade asset -- sad, but true -- struck out nine batters in seven innings (115 pitches) of work, surrendering two runs on five hits and a pair of hit batsmen. With the win, Hamels improved to 3-3 and lowered his ERA to 3.53 for the season.

After losing his first two starts of the season, the 31-year-old lefty has picked up the win in three of his last four starts. Furthermore, he seems to have cured himself of whatever was causing him to give up home run after home run. In his first three starts (18 IP), Hamels allowed seven* home runs.

*He only allowed 12 total hits during that stretch, but seven of them left the park, including a career-high four in the season opener against the Red Sox.

Since, Hamels has allowed just one home run in 33 innings, including his seven innings against the Pirates.

After the game, he attributed his recent success to keeping the ball down in the zone and controlling the corners, even if that occasionally results in hitting a batter or two.

"A lot of those homers were fastballs," Hamels said. "That was an indication that I needed to work on something in my bullpens, so I can really be able to establish those types of strikes, that type of pitch, a little bit further down in the zone so they don't have that sort of trajectory.

"It's just one of those things I have to work through."

Galvis improved his average to .336 after going 2-for-3 with a pair of singles and an RBI in the Phillies' 3-2 win over the Pirates.

He also worked a four-pitch walk to load the bases in the bottom of the seventh as the Phillies looked to add some insurance runs, but Chase Utley -- who was taken out as part of a double-switch immediately after -- grounded out to first to end the inning.

Howard not in cleanup role

I was surprised to see just how frequently Ryan Howard was hitting somewhere other than cleanup, but given his struggles this season, I guess I shouldn't have been. Then again, the guy who hit fourth in his place, Darin Ruf, hasn't been much better.

Howard has started 17 games in the No. 4 spot this season, while Francoeur is second with 13 appearances there. For Ruf, however, this was just his first start of the season at cleanup that didn't involve Howard being on the bench, and just his third overall.

Howard was hitless against the Pirates, while Ruf was 1-for-4 with three strikeouts.

After a clean inning from set-up man Ken Giles, Sandberg decided to remove Howard (like Utley) as part of a double-switch, with Ruf going to first, Ben Revere to center, and Odubel Herrera being inserted into center field for defensive reasons.

Sandberg steals a run from Pirates

In the top of the fifth, Hamels found himself in trouble after allowing the first two Pirates batters of the inning, Neil Walker and Jordy Mercer to reach on back-to-back singles. Pitcher Francisco Liriano followed with a successful sacrifice bunt, putting two in scoring position with one out.

Hamels further complicated the matter by drilling Josh Harrison, his second hit batsman of the game. After a coaching visit to the mound, the Phillies' lefty struck out Sean Rodriguez before surrendering a two-RBI single to Andrew McCutchen to give the Pirates a 2-0 lead.

And Pittsburgh would have added another had it not been for a successful challenge from manager Ryne Sandberg.

After originally being called safe on a soft ground ball to third baseman Cesar Hernandez that plated Harrison, Starling Marte was called out once umpires took another look at the play. It was close, but the throw from Hernandez indeed beat Marte to the bag.

Have a look for yourself:

With the successful review, Sandberg improved to 3-for-7 on the season, but more importantly, it allowed the RBI single from Galvis in the bottom of the inning to be the go-ahead run rather than merely the tying run.

Moment of silence for Amtrak victims

Prior to Wednesday's game, the Phillies observed a moment of silence for the victims of Tuesday night's deadly Amtrak derailment in Northeast Philly.