GameDay cranks up fans for Temple vs. Notre Dame game 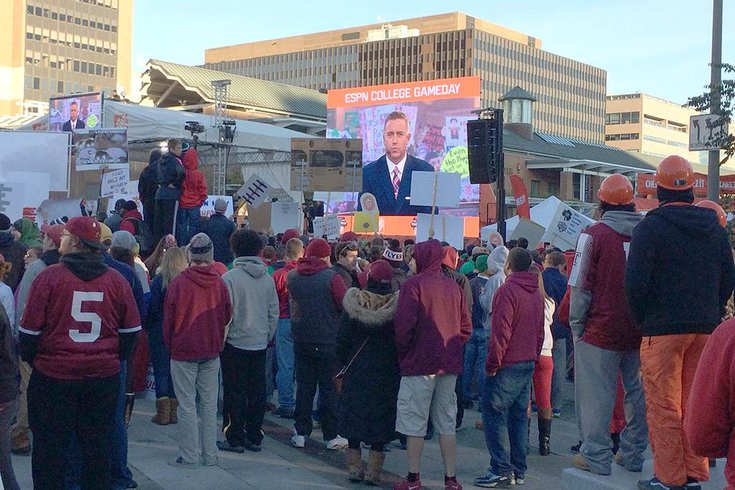 “I’m here for the environment,” the 24-year-old said after driving down from his hometown of Trenton.

“This is the biggest game there ever has been for Temple,” the undefeated college football team ranked 21st in the country heading toward a showdown later Saturday at the Linc against the 9th-ranked Fighting Irish.

“I’m jealous. I wish I were back on the field. We weren’t anywhere near as good a team when I played,” said Smith, who has a coveted sideline pass to the game because of his status as a former player.

Pete McAleer, a resident of the Fairmount section of Philadelphia, is glad the bad-old days – when he was an equipment manager in the 1990s – seem to be behind his alma mater.

“We played our games at Veterans Stadium and the place was so empty you could practically count the number of people in the stands on some afternoons,” he recalled. “Now, they have buses lining up at campus at 4:30 in the morning on Saturday because ESPN’s College GameDay is in town."

“For one week, Philadelphia and Temple University are the biggest story in college football. It’s hard for me to even wrap my head around it," he continued. “The whole season has been just an incredible ride. When we beat Penn State, there were grown men crying in our section of the stands.

“To be 7-0, with an opportunity to play Notre Dame on ABC, primetime, it’s just an incredible source of pride,” said McAleer, who holds six tickets in the fourth row for today’s showdown.

Win  or lose, he hopes the game boosts plans for building an on-campus football stadium for Temple.

"It would be great for students to rally around, help with recruitment and retainment," and cut the huge rental fees the college pays to lease stadium space, said McAleer.

As ESPN’s personalities diagrammed the confrontation and detailed other college mashups set for Saturday, fans listened to Temple’s band, waived banners and posters, and mugged for selfies and the overhead crowd camera.

One was Steven Schuler, who held a poster that read: "Brian Kelly hates puppies.”

Patti Strauber, 60, dressed in green and sporting signs supporting the Irish, took that and other ribbing from the legion of Temple's cherry-clad fans in stride.

“Some of the signs are great,” said the Downingtown resident.

She was cheering on the green because her sister, Muffet McGraw, coaches women’s basketball at Notre Dame.

“It’s fun,” she said of the spectacle after posing for a photo with Temple supporter Andrew Kapel, a Temple business school student who was jazzed about GameDay visiting Philadelphia.