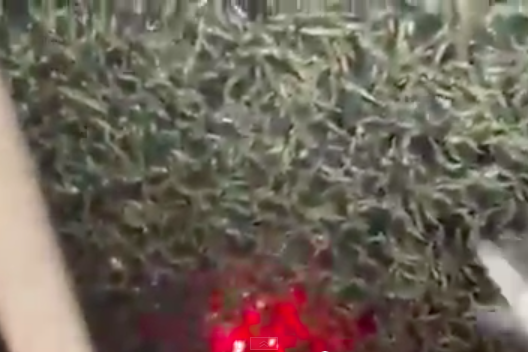 Mayflies swarm a vehicle on the Savanna–Sabula Bridge in Iowa.

Over the weekend, swarms of shadflies, also known as mayflies or lake flies, covered the Savanna–Sabula Bridge over the Mississippi River in Iowa, causing major hazards for drivers.

Shadflies are aquatic insects with two pairs of wings. They are attracted to light and often gather in large numbers.

The Iowa Department of Transportation (DOT) was called out by law enforcement to plow the insects off the bridge, as they were causing the road surface to become slick.

Dick Banowetz, a DOT supervisor in the area, said the flies were ankle deep on the bridge. Once his crew plowed the bridge, they applied sand for traction.

The DOT shared the video of the shadflies, which has gone viral, on its Facebook page.

WARNING: If you have a phobia of giant insects, this video is not for you.