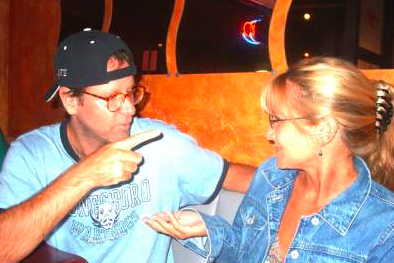 Daniel Sembello was an athlete, cat lover and Grammy award-winning musician, the baby brother in a family of highly talented musicians.

A swim in the Schuylkill River on Saturday tragically cut short that gifted life.

Sembello, who was attending the Hidden River Blues Festival at Venice Island Park in Manayunk, died while swimming in the river to escape the stifling heat. Police said it appears strong currents ensnarled Sembello who, family say, was used to swimming in the stronger waters of the Pacific Ocean off Los Angeles.

During Monday's surprise concert in Center City, legendary musician Stevie Wonder lauded Sembello as the rest of his family, both blood and musical, grieved.

“He was a ... deeper, philosophical person than people knew,” said his cousin, Sharon Silver, who worked with Sembello on an album promoting peace and justice. “Much deeper than what they may have seen in the surface, he was so charismatic and charming.”

During his concert at Dilworth Park, Wonder called Sembello a “very special friend … a great songwriter and a great, great human being.”

Sembello, 52, of Ardmore, was the youngest in a trio of brothers who were quietly famous in the music industry as singers and songwriters.

Older brother John, who died in 2013, was part of a duo that wrote songs for the Lovin’ Spoonful and The Turtles and had his own record produced.

The middle brother, Michael, achieved the most fame with his hit song “Maniac” from the movie “Flashdance.” Michael Sembello won a Grammy, along with other singers and songwriters, for that soundtrack in 1984.

Seemingly not to be outdone, Daniel Sembello went on to win his own Grammy two years later as part of the team of songwriters behind the soundtrack for the movie "Beverly Hills Cop." Sembello helped pen the hit songs "Neutron Dance," performed by The Pointer Sisters and "Stir it Up," performed by Patti LaBelle.

But it wasn’t the awards that motivated the brothers, Silver says.

“Those guys did it for the love of the music, not for the awards,” she said. “That period of time was golden for them.”

During an interview, Daniel Sembello reminisced about his musical family and some special guests they had at home for dinner: the Jackson 5, including Michael Jackson:

Michael (Sembello) was musical from an early age, but I wasn’t as sure that the music business was the right place for me. It took me a little longer to realize that I wanted to make music. My cousin was playing with the Jackson 5 in Philly and he had invited them over for dinner before the show. Sitting around my cousin’s table eating pasta, Michael [Jackson] began to egg me on saying that your brother bragged about how great of a keyboard player I was. I replied, “ Well, I’m actually a better basketball player but I’ll play something if you want. So I played "Shake Your Body Down to the Ground” then I segued into “The Secret Life of Plants” a song I learned in the studio with my brother and Stevie Wonder. Michael became captivated with the melody and asked me to play it at least a half dozen times. Each time I played, Michael leaned a little further over the piano to watch my hands. That night was truly magical for me. The day Michael died my brother and I both lost a great friend and inspiration.

"He was a gifted athlete," Silver said. "Things were very easy for him. He could have had a scholarship for basketball."

Instead, he followed his brother Michael and their desire to make music in Los Angeles. The fact that he died while swimming seems "surreal," she said.

Memorial services will be held Monday, August 24, from 7 to 9 p.m. at the John Stretch Funeral Home, 236 E. Eagle Road, Havertown, and in Los Angeles, where Silver will take some of Sembello's ashes.