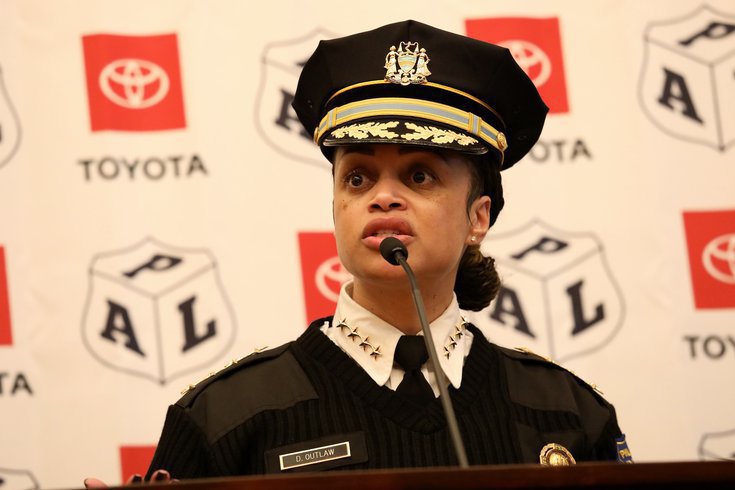 Police Commissioner Danielle Outlaw says that the criminal justice system works best when every part of it is in alignment. Philly's lead cop lauds focused, data-driven efforts to reduce crime in small pockets of the city, though violent crime overall has increased in recent years.

Philadelphia's gun violence crisis could lead to the loss of an entire generation of Black and Brown residents unless there is greater cohesiveness in addressing it, Police Commissioner Danielle Outlaw said on a podcast earlier this week.

The city's top cop spoke with Washington Post Live about the increase in violent crime over the last two years, noting that shooters – and their victims – are getting younger.

More than 80% of the city's shooting victims since 2015 have been Black, according to a comprehensive report on gun violence released late last month by Councilmember Curtis Jones. So have 79% of people arrested for shootings.

"And the more you think about it, this is potential — we're losing an entire generation of young people or individuals that identify as Black and Brown," Outlaw said. That's a problem, and it's a crisis. And until everyone gets on the same page and recognizes that it's a crisis, we're going to continue the same thing in 2022, 2023, and so on and so forth."

Outlaw said work needs to be done to fix the driving factors – domestic violence, drug sales and access to weapons. She stressed the importance of having a unified plan to reduce crime, noting the strategic plan she put in place when she first joined the Philadelphia Police Department in 2020.

One of these points of disagreement centers around the issue of illegal firearms. The police department has gone "very hard" after people carrying firearms illegally because they're "at the root of a lot of these nonfatal shootings and homicides that we're seeing," Outlaw said.

But the District Attorney's Office, under Larry Krasner, holds a different philosophy, as prosecutors outlined in the report released by Jones.

The D.A.'s Office said the PPD's focus on increasing the arrest and conviction rates for illegal gun possession "is having no effect on the gun violence crisis." Instead, the D.A.'s Office called for police to place greater emphasis on "accurately identifying and removing shooters from the streets."

Outlaw acknowledged there is a "different principle" in the D.A.'s Office. But she said it's not too late to find alignment in an effort to reduce the city's homicide figures. Last year, the city recorded 562 homicides, the most in its history.

"And it's not just the D.A.," Outlaw said. "Whomever it is, if we're not on the same page, then OK, you continue to do what it is you're doing over there, but for the Philadelphia Police Department, we will maintain our priorities, and we will be more focused and precise as ever to make sure we're getting the most violent individuals off the street."

The D.A.'s Office did not immediately respond to a request for comment.

Krasner has sought to fulfill his pledges to reduce mass incarceration by deemphasizing nonviolent arrests, eliminating bail for many minor offenses and declining to bring charges in simple drug possession cases. He also has sought to hold police accountable for their actions. But this approach has not come without criticism.

In December, Krasner came under scrutiny for claiming Philadelphia was not experiencing a "crisis of lawlessness." Former Mayor Michael Nutter publicly disagreed, demanding Krasner apologize to the families of victims lost to gun violence during his first term.

There have been 53 homicides in Philadelphia this year, down 15% from this time in 2021, police data shows. There have been 168 nonfatal shooting victims and 44 fatal victims this year, according to the City Controller's Office.

Violent crime has surged since the COVID-19 pandemic began two years ago, in Philadelphia and across the country. That spike has played out amid continuing calls for police reform, which grew louder during the civil unrest sparked by the police killings of George Floyd and, in Philadelphia, Walter Wallace Jr.

Yet, Outlaw said holding police accountable and supporting law enforcement don't have to be mutually exclusive.

The city implemented some reform initiatives including the 911 triage and responder program — which includes social services professionals intervening in 911 calls that do not require a police presence. City Council passed legislation banning police from using chokeholds and other physical restraints. The PPD also updated its use of force policy to bar the use of tear gas on peaceful demonstrations.

"We found ourselves at the beginning of a new movement, and I say movement because I don't think it was a moment in time," Outlaw said. "There was an opportunity there to make some really meaningful changes related to reform and transformation, but we still found that there were a core group, a lot of people in the community, that said, 'Whoa, whoa, whoa. Wait. We want reform, but we still want cops, and we want to see you.' So it's almost as if we were being asked to do everything and nothing at the same time, meaning we want you to do more."

She acknowledged that many police believe additional resources need to be placed in other services. But Outlaw said that funding shouldn't come at the expense of police, noting it will take more police funding to increase the presence of officers and provide them with the proper tools and technology.

Among her solutions to reduce crime in the city is Operation Pinpoint, a deterrence effort in which police focus on the small pockets where most of the city's crime occurs. The initiative seeks to incentivize people not to commit crimes while heavily prosecuting people who commit violent crimes.

The initiative was expanded to 45 zones in 2021. There are pinpoint spots in every neighborhood in the city, but their boundaries have not been made public.

Outlaw has consistently praised Operation Pinpoint, noting that it has helped to reduce violence in parts of Fishtown, South Philadelphia and Northwest Philadelphia. Yet, other sections of the city have seen spikes in violent crime.

Established as a gun violence intervention tactic in 2019, Operation Pinpoint is one of many "focused" interventions that Outlaw has utilized in her police career, which includes prior leadership roles in Portland, Oregon and Oakland, California.