Some Philly neighborhoods bear an undue burden of environmental hazards; a new effort aims to change that 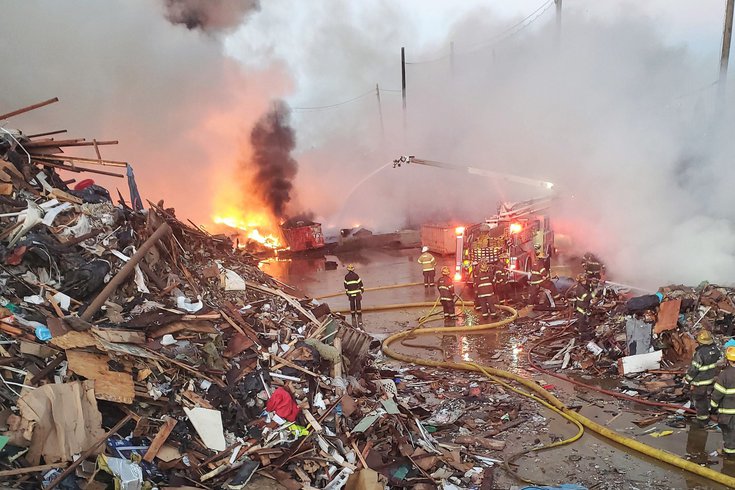 The Community Health Act seeks to reduce environmental hazards in Philadelphia's most vulnerable communities through a comprehensive environmental justice plan. Above, firefighters extinguish a blaze at the Delaware Valley Recycling Center in Southwest Philly last year.

In November, a two-alarm fire at Delaware Valley Recycling in Southwest Philadelphia sent thick, black smoke into the air, visible across the city. The smell of burning rubber — caused by burning tires and other debris, including wood — filled the community for several days.

The Environmental Protection Agency notes that burning tires can emit toxic fumes and compounds, creating air pollution. The city's investigation of the junkyard fire found that any toxins found in the air were recorded at levels too low to cause long-term damage. Officials recommended residents limit their time outdoors until the fire was completely under control.

However, the Office of Emergency Management did find high levels of fine particles in the air due to the smoke. In an analysis released to the public, officials noted that residents were reporting nausea and headaches due to the pungent odor for multiple days.

Though less toxic than other industrial incidents the city has seen, the fire underscored the adverse health and environmental impacts of living near industrial operations. New legislation introduced last week in City Council aims to better protect Philadelphia neighborhoods that bear an "undue burden" of pollution from industrial operations.

The Community Health Act, sponsored by Councilmember Helen Gym, would require the Department of Public Health to develop an environmental justice map that identifies communities that experience excessive exposure to toxins and unsafe chemicals due to their connections to industrial sites.

The neighborhoods most burdened by pollution tend to be communities of color, Councilmember Jamie Gauthier said.

"When we talk about environmental justice, we are by definition talking about racial justice, too," Gauthier said. "For too long, minority communities have disproportionately carried the burdens of pollution and the negative health consequences that it creates."

The bill would require the city to use the environmental justice map when granting any license or permit for any industrial siting, activity or operation that could adversely affect public health. Any new project within or beside these neighborhoods that would adversely impact community health would be subjected to additional scrutiny.

A cumulative impacts assessment would allow city officials to better understand the potential health risks that the site would have on the community. The Department of Public Health also would have the power to mandate mitigation measures before a project could proceed.

Environmentalists describe "cumulative impacts" as the combined effect of multiple sources of pollution on a given group of people — often, this is the cause of the undue burden on certain communities.

The city's assessment would consider the "impact of other past, present or foreseeable future sources of pollution" across multiple aspects of the community, including specific demographics, health and other vulnerabilities among those who live close to any proposed industrial site.

The results of each assessment would be made public. The city could require mitigation efforts – like air quality monitoring – or deny the permit.

"This will make Philadelphia a national leader in advancing environmental justice and build a livable, breathable and healthy future for our city," Gym said. "Those most impacted by pollution have a right to be informed and should have a voice in decisions that affect their lives and communities."

In the aftermath of the tire fire, some Southwest Philly residents were upset about the city's response. One woman who studies the urban environment found her air quality monitor recorded an index of 445, which the EPA deems hazardous. 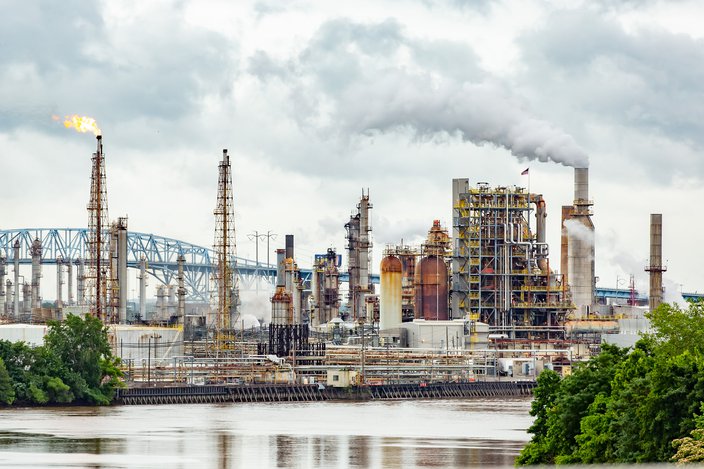 The Philadelphia Energy Solutions oil refinery in Southeast Philadelphia, hours after an explosion caused a fire that sent smoke billowing into the sky on June 21, 2019.

For many residents, the tire fire was reminiscent of the refinery explosion at Philadelphia Energy Solutions in Southwest Philly in 2019. The resulting fire sent hazardous smoke billowing into the air for more than 24 hours, and released 5,239 pounds of hydrofluoric acid, a toxin that can cause skin damage, chronic lung disease, blindness and other conditions.

In 2020, a report found the since-shuttered site produced the highest concentrations of the cancer-causing toxin benzene of any U.S. refinery. The benzene concentrations at Philadelphia Energy Solutions measured 49 micrograms per cubic meter – about five times the EPA standard.

The U.S. Centers for Disease Control and Prevention found that long-term exposure to benzene can cause leukemia and other blood cancers. It also can impact the menstrual cycles of exposed women.

Between industrial impacts, air pollution aggravated by a lacking tree canopy or car exhaust, some neighborhoods bear the brunt of the city's adverse environmental impacts. Even non-environmental stressors, like poverty or food insecurity, can exacerbate the burden on these communities, many of which are predominantly Black and brown.

Today, I introduced the Community Health Act to develop the first comprehensive environmental justice map for Philly and to protect our most at-risk communities from pollution.

I'll need your support to win this for our city — sign on here: https://t.co/UmlNX46P5P pic.twitter.com/wZeHZtEPPt

About 21% of children in Philadelphia have asthma, which is higher than the national rate. Researchers at the University of Pennsylvania acknowledge that increased levels of air pollution are a primary contributor, especially in neighborhoods near industrial sites.

Additionally, researchers at Drexel University have noted that environmental toxins are among the various factors that contribute to neighborhood disparities in cancer rates. They have developed a searchable tool that highlights the way cancer rates differ across Philadelphia.

For instance, Nicetown had an incidence rate of 577 cancer cases per 100,000 residents from 2012-16, which was higher than the city's average of 473. But nearby East Falls was about the same as a the city as a whole.

"Ensuring environmental justice and the involvement of communities in the development and implementation of laws and policies that benefit public health and cancer prevention could also help to improve the health of the community," the report said.

The Community Health Act would be among the first of its kind if passed and signed into law.

Officials from Gym's office told WHYY that the Community Health Act likely will be heard in a City Council committee meeting later this month.