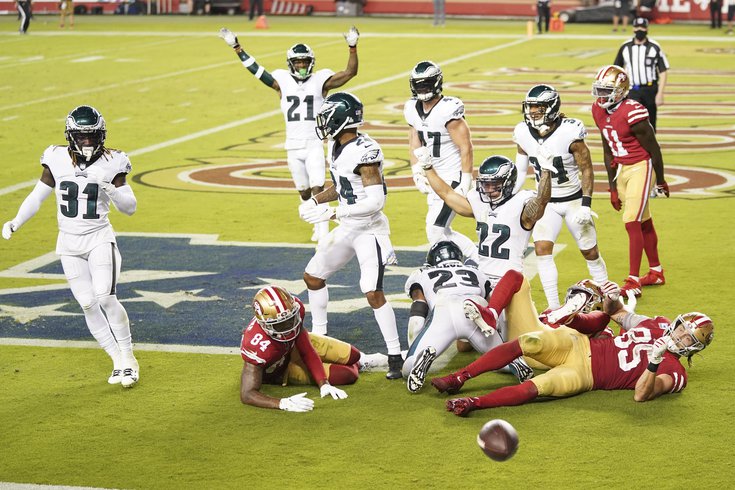 The Eagles won a game!

Welp, the Philadelphia Eagles are now in sole possession of first place in the NFC East, lol, after their 25-20 win over the nine-point favorite San Francisco 49ers. It's just how we all envisioned it. As always, win or lose, we hand out 10 awards.

Heading into this game, the Eagles were missing the following:

• Another "sorta starting" offensive lineman, whether you want to call him the RG or the LT.

They also lost their starting RT early in the game, though he returned, but was clearly not 100 percent.

It wasn't pretty. The Eagles were outgained 417-267. They only had 18 first downs, and they averaged just 4.5 yards per play. But... the offense only turned it over once, an INT on a tipped pass at the line of scrimmage, and they didn't make the crippling mistakes that have defined the season up until this point. It was a gutty effort, if difficult to watch at times.

Fulgham was claimed off of waivers late in training camp, and although he had little time to make an impression, he showed a little something, and was good enough to at least stick on the practice squad after final cutdowns. With the Eagles severely depleted at wide receiver, Fulgham was added to the active roster this week, and he made the most of his opportunity Sunday night.

Ladies and gentlemen, his name is Travis Fulgham.#PHIvsSF | #FlyEaglesFly

OK, so Singleton should be a little more recognizable since he's been around a little longer than Fulgham, but he's usually just a special teamer. Singleton was in the right place at the right time Sunday night, and when Nick Mullens handed him a pick-six, Singleton gladly accepted the gift.

The two biggest Eagles plays of the year so far were made by Travis Fulgham and Alex Singleton, just as we all thought.

4) The 'Hey, These Things Are Useful' Award: Turnovers

Through the first three games, the Eagles' defense forced zero turnovers. (They did recover a fumble on special teams against the Rams.)

It's a little known fact that when you win the turnover battle on the NFL, your odds of winning the game improve. It's true. Look it up!

Derek Barnett is beginning to show that he can be the player the Eagles hoped they were getting when they used the 14th overall pick on him in 2017. Josh Sweat appears to be a legitimately useful rotational edge rusher, as he now has a sack in three of the Eagles' four games. Hell, Genard Avery had a sack and five(!) QB hits.

Without the D-line, the Eagles would be 0-4.

6) The 'When the Arm Isn't Working' Award: Carson Wentz's feet

Through the first three games of the season, Wentz's accuracy hasn't been stellar. #Analysis. You may have even read an article or two pointing out that he has arguably been the worst quarterback, statistically, in the NFL so far.

Some of that has been because of injuries to his offensive line and his receivers, but that excuse only goes so far these days, as Wentz has consistently made poor throws and poor decisions with the football all season long.

It's only a temporary solution, but it's one that helped the Eagles pick up their first win.

7) The 'Home Cookin' Award: The clock shenanigans at the end of the game

Ultimately, it didn't matter, but the Eagles were nearly affected by some ridiculous timekeeping late in the fourth quarter. Down 9, the Niners were driving, and Kendrick Bourne was tackled short of the end zone with 2:08 left to play. The officials called it a touchdown, and while their error was fixed on the review, the Niners were beneficiaries of a stopped clock, which saved them from either (a) burning a timeout, or (b) not having the clock tick down to the two-minute warning.

On the ensuing onsides kick, the clock should have started as soon as Richard Rodgers bobbled the kick. It did not, or at least, one lone second took a looooooooong time to come off the clock. The Eagles ran it three times and punted, but the Niners were left with 1:40 left to drive the field instead of what should have been something closer to 1:00, as they were gifted an extra clock stoppage.

Update: We have an explanation on that play:

When the receiving team recovers an onside kick in the field of play and does not advance, by rule this is a 1-second clock adjustment. If a receiver shows that he is going to play the ball, it runs as usual. That's how there was 2:01 after the onside kick

So in conclusion, I'm still not wrong, in my opinion. That rule is just dumb, and I'm the better man for maintaining my rightness in the face of adversity.

Zach Ertz has been a great Philadelphia Eagle, and his heroics in the Super Bowl will be remembered by Philadelphians forever. Does that serve as a sufficient disclaimer? Cool.

Zach Ertz is not George Kittle. George Kittle is ridiculously good. Like, he's a top 20 player in the NFL. On the night, Kittle had 15 catches on 15 targets for 183 yards and a TD, and frankly, the Niners' game plan should have just shifted to, "Throw it to Kittle over and over, because the Eagles can't stop it." (Disclaimer: Yes, Kittle did have the drop on the two-point conversion, but shut up.)

Anyway, yes, Ertz is attracting more attention because the Eagles' receivers are extremely banged up, but any delusion that he should be paid like Kittle should just stop now.

Pooooor wittle Cwis Collinwurff didn't like wearing his wittle masky. It huwrt his wittle ears, and his wittle mouth and nosey were a wittle warmer than he likey.

10) The 'Traaaaaassssssshhhh' Award: The NFC East

No, I've never played quarterback in the NFL, but I'm pretty sure I could against the Cowboys' defense. Meanwhile, the Giants have the worst record in the NFL since their infamous yacht picture, and the Washington Football Team remains one of the most dysfunctional franchises in sports.

Once the strongest division in the NFL, the NFC East is now by far the worst. Cumulatively, the NFC East is 3-12-1 this season, or essentially the equivalent of the 2019 Detroit Lions, and they have a point differential of -125.

Yes, the Eagles have sole possession of first place in the NFC East, but that's an extraordinarily hollow achievement, and there's an argument to be made that they would be better off, long-term, if some other team just ran away with the division.

Instead, it's going to be one of those seasons... again... that just won't die because the rest of the division sucks. The Eagles' chances of winning the NFC East jumped from +290 before Sunday's game to +105 with the win, according to TheLines.com's consensus odds.