Handing out 10 awards from the Eagles-Giants season finale 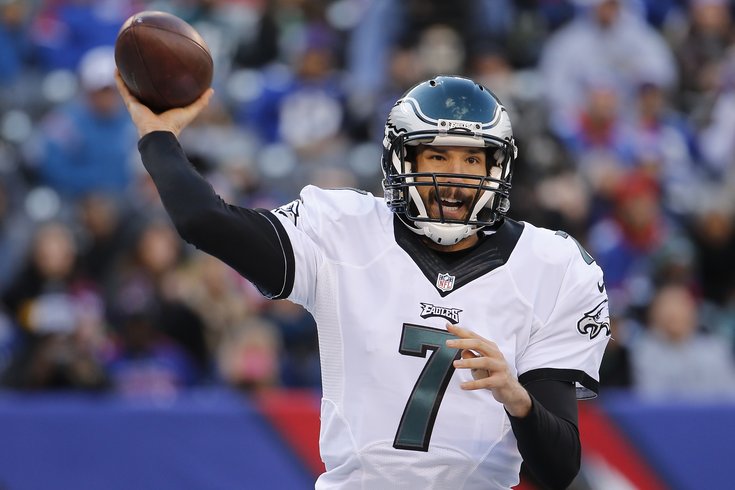 Did Sleevie Wonder just play his last game for the Eagles?

The 2016 season is officially over for the Philadelphia Eagles, and by defeating the New York Giants, they went out on a high note. I guess. As always, win or lose, we hand out 10 awards.

Move over Bo McMillin and Fred Bruney, you scrubs. With a 1-0 record, Shurmur is now tied with you the for the all-time best winning percentage in Eagles coaching history.

All this game really was about was better draft position, and while the Giants lost, ultimately they won. Heading into this matchup, the Eagles were going to draft anywhere between 9th and 11th if they lost, and somewhere between 13th and 17th if they won.

The Eagles were fortunate to get the highest pick possible on the winning side, as they will pick 13th overall. Had they lost, they would have selected 10th.

Here is a quick list of players drafted 13th overall over the last 10 years:

In other words, like every other draft position, some hits and misses.

In case you missed the Eagles' 2016 opponents, here you go:

Sleevie Wonder (as he'll be called by me henceforth) had a legitimately really good game against the Giants, and he progressed nicely as the season went along. I cannot say if he is worth the money that he is likely to command when he hits the open market this offseason, but he has certainly made a case that the Eagles should seriously consider re-signing him. I'll have a much more in-depth piece on that soon, once I've digested the season in its entirety.

Still, the Sleeved One was told he should lose this game on purpose. His reaction:

We even confirmed that he understood. "Blink if you understand," we said:

And yet, he won despite our clear direction.

Not that it mattered in this meaningless game, but there has seriously never been a quarterback in the history of the NFL who has gotten away with intentional grounding more than Eli Manning. It's comical. It's like the rule does not apply to him at all.

6) The Hope for the Future Award: Nelson Agholor

Agholor had two catches for 23 yards, sooooo, yeah, I get it -- Big deal, right?

However, the play he made where he caught a pass, cut up the field, made a Giants linebacker look stupid, and turned on the jets was impressive. Agholor didn't have many plays this season where he had a lot of yards after the catch, but that ability is there.

Tom Coughlin was a great coach, and I am legitimately going to miss him if he is no longer the Giants' head guy after this season, for reactions like this:

How I will miss this. #Eagles #Giants #Coughlin pic.twitter.com/bbKX8Dr6of

Despite the win, the Eagles still managed to miss a boatload of tackles, as Rashad Jennings ran for 170 yards on 27 carries. The Eagles' defense got absolutely gashed by the run on the second half of the season.

9) The Charity Award: The Eagles' offense

Today the Eagles had two more turnovers. A year after the Eagles led the NFL with a disgusting 36 giveaways, they turned the ball over 31 times in 2015.

10) The No Sleep for the Weary Award: Me

I thought I'd be able to relax for a week or so after the long grind of training camp and the regular season. Nope. Now there's a coaching search to cover. That's the Eagles -- they always manage to keep the fan base engaged even when they're terrible.

OK, so I shouldn't be bitching about covering a football team. Still...